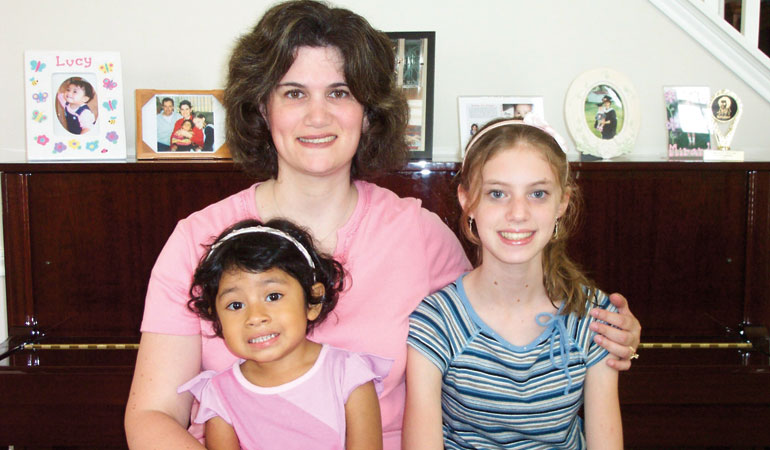 Around the time our daughter, Miranda, turned 10, my husband, Dave, and I began thinking about adopting a child from another country. When consulted, Miranda decided that it was a good idea. “I want a sister from Guatemala, like my friend, Hannah,” she declared. And that was that!

Four months and thousands of meetings, forms, telephone calls, e-mails, and fingerprints later, we got the call. “Mom, that’s my sister!” Miranda crowed as the three of us gathered to see the tiny face of baby Lucy on our computer screen. We all fell in love with Lucy that day.

During the 13 months it took for Lucy’s adoption to be finalized, the three of us daydreamed so much, it felt like Lucy was already part of our family. But two months or so after the referral, I realized that this fairy tale had some kinks that needed adjustment.

Miranda, Dave, and I were wandering through a baby store, touching lacy dresses and tiny denim overalls. Miranda grew more and more sullen, lagging behind us, dragging her feet. By the time we reached the stuffed-animal department, she was into a full-blown tantrum. “She is going to get everything and I will get nothing!” she wailed.

When we got home, I did the only thing I could think to do: I pulled out Miranda’s baby album and we looked at shots of me holding her the day she was born. We watched the home videos of those early days. Reminiscing about the day she came home seemed to reassure her.

The big day came a few months later. I’ll never forget the smile that spread across Miranda’s face when we first met Lucy, at the airport. By the end of our 45- minute ride home, Lucy and Miranda were pals.

The credits don’t roll here, though.

The rivalry that erupted in the department store continues to rear its head. When Miranda sits close to me and holds my hand, Lucy turns herself into a 20-pound wedge to try to separate us. It makes Miranda furious. “You’re my mom, too!” she says.

Like any sisters, the girls argue over possessions; if Miranda has something, Lucy wants it. Dave and I talk with Miranda about her feelings. She’s very honest.

“Sometimes, I wish it was still just the three of us,” she has said more than once. She and I go out every Saturday afternoon, just the two of us, for lunch or a movie. She and Dave regularly play video games—in the basement, away from Lucy’s little fingers.

But, for the most part, in the year and a half since Dave and I brought Lucy home, we’ve all settled into our new roles. I’ve watched Miranda teaching Lucy to give high five’s, and Lucy showing Miranda how to spread the filling from an Oreo cookie all over her face and hair. Seen giggling at the kitchen table, or laughing on the family room floor, the two girls obviously adore each other. And while Dave and I know we’ll be going through Miranda’s moody adolescence about the time that Lucy hits the terrible two’s, we wouldn’t trade our life for any other. Nor would our girls. Just ask them!

Next:
>
A New Wave of Support
Authors
Amy Shore