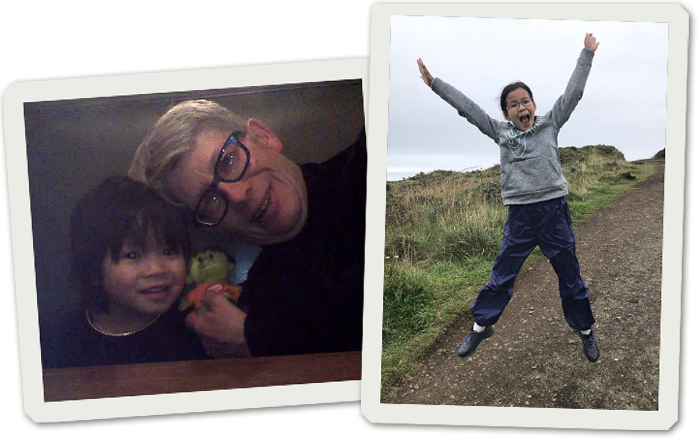 When my wife and new daughter passed through airport security, our son, Ethan, was at my feet playing with an array of toys. Janet put the baby down before greeting me, and we watched as LìLì toddled up to her new brother, slowly turned herself around, and backed her way onto his lap. They played away in their little cocoon, a stream of harried travelers flowing around our new family.

Walking through the airport, LìLì clutching Janet and gazing at Ethan, I remembered how worried Janet had been about reports that some adopted children have trouble bonding with their new families. Why all the fuss? Eighteen-month-old LìLì was clearly already bonding with us.

It wasn’t long, though, before I realized that ‘us’ did not include me. Her first two months with us were mostly spent in Janet’s arms or on Ethan’s lap.

I made some headway after Janet went back to work. Tiny thing that she was, LìLì had a voracious appetite, and warmed to me as I catered to her. Ribs, steak, chicken; pears, apples, bananas; broccoli, asparagus, peas; rice, pasta, beans; she shoveled everything in with great gusto. One day, exhausted from food prep, I turned to find her smiling in her high chair, a chicken leg in each hand like a miniature Henry VIII.

Play, however, was the true key to her heart. Dolls, dress-up, hide-and-seek, reading—you name it, she loved it. Pushing LìLì on a swing one day, I ducked under her as she swooped overhead. She laughed uproariously, kicking her legs and pounding her little hands on the harness. After the umpteenth pass, she squealed “Stop, bàba!”

She had been calling Ethan gēge and Janet māmā, Chinese for older brother and mom, for quite a while already. But until then she had used no name for me. Now, when I plucked her from the swing, she placed her hands on my face and pulled me nose to nose, saying, “Xiè xiè bàba,” Chinese for “Thank you, Daddy.” The tension I had been holding inside drained away. I kissed her on the forehead, awash in relief that she had begun to accept me as her father.

A Place in Her Heart

A month later we went out to dinner to celebrate her second birthday. LìLì kept one hand on Janet’s shoulder as she sampled food from each of our plates: egg rolls from mine, shrimp and ribs from Janet’s. But between bites, I noticed her glancing around the restaurant. After a big spoonful of chicken fried rice, she sidled over to a young Asian man sitting at a nearby table. We scooted her away but, a few bites later, she ambled over to another Asian man at a different table.

The normally talkative LìLì did not utter a word the entire evening, or the days following. Nothing was wrong with her physically. LìLì and her words were simply on strike. She reverted to pointing and grunting to indicate what she wanted, as she had when she arrived six months earlier.

Five days later, LìLì and I were playing together on the floor. She fixed her gaze on a doll to my left, and began bobbing and making sounds.

“Just say bàba, LìLì, and I will bring it to you,” I pleaded, at my wits’ end. It wasn’t just that I wanted her to call me bàba again. I also thought that encouraging her to use this linguistic remnant from her time in China might reassure her enough to resume speaking.

It didn’t work. She lunged and reached and grunted with even greater ferocity. I sighed and handed her the doll.

Desperate for clues about how to help her, I went back over that evening at the restaurant in my mind. The image of LìLì staring at the young Asian men reminded me of something Janet had read in reports about her time in foster care. LìLì moved through two homes, and her second foster father made regular excursions to the playground with her, which helped our fun-loving girl come out of her shell. Perhaps seeing the men at the restaurant sparked a memory of him.

Watching LìLì pat the doll’s hair and straighten its blouse, I imagined this kind man delighting in her smile and enjoying her enthusiasm up until the moment she left. He knew that she would only be with him for a short time, and yet he risked loving her fully. He was her bàba, not me.

Lying on the floor, arms at my sides, I rolled toward her. She stood up and laughed as she tumbled over me. After numerous repetitions, we sat facing each other. She once again gestured toward the doll. I took a deep breath, then said, “Say daddy, LìLì, and I will give it to you.”

She looked up at me and appeared to consider this proposition. Finally, she nodded and said “da-da.” I held up the doll, but she walked right past it on to my lap. We read a book, with LìLì talking away the entire time.

Hearing her speak again was magical. The sound of her voice filled me with joy, though I couldn’t help feeling sad that she wouldn’t be calling me bàba anymore. Through all of these feelings, however, was admiration for our little human dynamo’s tenacity in holding her ground, and her loyalty to her bàba.

I thought about him while I reached for another book. I did not want to displace her bàba. My gratitude to him precluded that. By loving her selflessly, her foster father found a place in her heart. That she made a space for him gave me hope that she will one day make a space for me as well.

JEFF SEITZER teaches at Roosevelt University in Chicago, where he won an award for adjunct teaching in the humanities in 2018. He is a regular contributor to The CMTA Report and his writing has also appeared in the Omaha World-Herald, The Brevity Nonfiction Blog, Hippocampus, The Write Launch, The Good Men Project, and Pulse Magazine. He has recently completed a memoir about his experiences as a stay-at-home parent.