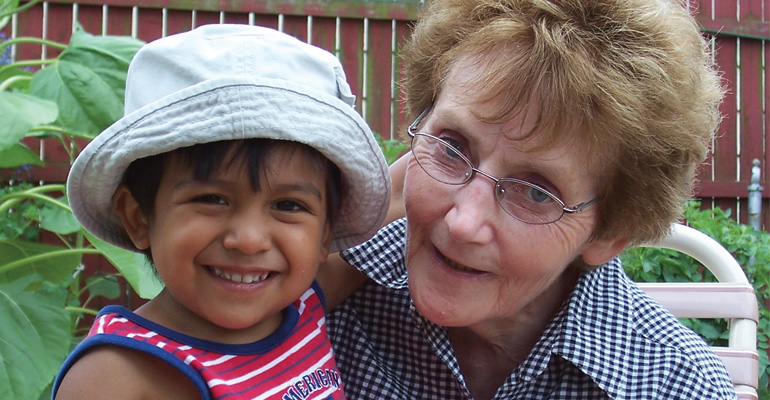 To anyone else, it’s a family snapshot: my children stand on the front porch of their paternal grandparents’ home, arms entwined. But this photo, like so many others, records a cherished scene that I once thought would never be mine to treasure. I had no children to include in family pictures after a decade of marriage and an intense desire for a baby. Despite numerous tests, tubal surgery, and drug therapy, I had never become pregnant. My mother, who lived nearby, was aware of my efforts and had even gone with me to doctors’ offices. But my in-laws had been spared my husband’s and my struggle with infertility since they lived far away. I dreamed about the day when I could disclose to them the happy news about the expected arrival of a grandchild.

When that day finally dawned, I worried about how they would react to the fact that their first grandchild would be adopted. For Jack and Dorothy Gilman were first-generation Americans and their only child, Ernie, was born when they were both in their forties after a stillbirth and several miscarriages. How would they come to accept and love a grandchild not of their own blood and also from Chile, a country and culture so unlike their own?

My anxieties were not entirely misplaced: after we told my in-laws about our plans they wrote us a letter begging us to reconsider. They didn’t oppose adoption per se, but they were wary of inter-country adoptions and especially of health problems a child from abroad might have. We wrote long letters and enclosed newspaper clippings about adoption. For every question they raised, we came up with an answer. But it was their rabbi’s assurances that helped my in-laws finally change their minds. “Our grandchild will be a joy to his parents and to his grandparents,” wrote Jack, “and will keep the name of Gilman alive for generations to come.”

I’ve learned that my in-laws’ reaction to adoption was quite typical. When I wrote The Adoption Resource Book, a guide to adoption, prospective adoptive parents confided to me the difficulties they had when discussing adoption with their parents. On reflection much of the unease makes sense. Prospective adopters have often lived with the possibility of adoption for years and mulled over their final decision for months. Yet we ask our parents to endorse our plans from the moment we break the news and to love as their own a grandchild whose origins they know little about. Even the most eager grandparents-to-be might be expected to harbor a few doubts under the circumstances. Adoptive grandparents need preparation and a chance to vent their feelings.

Grandparents-to-be, like prospective adoptive parents, have their own grieving to do over lost hopes for a biological grandchild. “I was disappointed to a degree that my son and his wife didn’t give birth to their child,” admits Jerry, whose son Tom and daughter-in-law Kathy adopted a newborn. “But the adoption was to be a fact, and I was very much in favor of it.” Mary, whose son Dave and daughter-in-law Katie adopted two school-age children from Chile, admits that she felt a tinge of regret: “But it wasn’t a big point. If you can’t have the next generation one way, you’re very happy that you can have it another.”

Prospective grandparents have to deal with their own lack of knowledge about the adoption process and their particular prejudices. Kathy’s father admitted to having “reservations about the child’s medical history. I worried about AIDS … and everything else that can affect a baby’s health.”

Grandparents-to-be may leave other feelings unspoken. After Tom and Kathy started speaking with a pregnant woman about an adoption plan, the prospective grandparents feared that the adoption might fall through.

“That was the hardest part,” recalls Tom’s mother. “I worried that the mother-to-be would change her mind, which would break Kathy’s and Tom’s hearts.” Kathy’s mother found the days just after the baby’s birth particularly trying: “Tom and Kathy were miles away with a brand-new baby.”

Another grandmother confided to me that the open adoption her daughter was planning scared her. Her daughter had already been through one disrupted adoption: after the baby was in her daughter’s home for a brief period of time, the birth mother reclaimed the baby. She knew that this was rare, but says, “It was like a death in the family. I didn’t want this to happen again.”

Some adoptive grandparents may be plagued by doubts and insecurities, particularly when their grandchild’s birth family stays in contact as the child grows up. One adoptive parent reported that when she informed her in-laws that she was taking her three-year-old son to meet his birth mother, her mother-in-law panicked. “You’re not going to see her,” she said. “I have a lot invested in this child.” Her mother-in-law had revealed her secret fears that the continued contact through telephone calls, letters, and even an occasional visit might lead to the return of the child to the birth family. (That is actually an impossibility once the adoption has been finalized in a court of law.)

If you’re thinking about adoption, try to talk with your parents in advance about your plans. You might ask them to join you at a meeting of an adoptive parents group, subscribe to a newsletter, or talk with experienced adoptive grandparents by telephone. A local parent group might offer a special workshop or panel discussion for adoptive grandparents. (For several years I offered a grandparent workshop at conferences, bringing in several grandparents through adoption to be the panelists and asking the local group to invite members to bring their parents.) A comment from one prospective grandparent who attended a workshop I ran underscored just how important that can be: “I’ve been so in the dark. This is the first time my daughter has shared her adoption plans with me.”

You might want to speak with your parents and other family members about the information you’ve revealed to them about the adoption and what they should reveal to others. The background information you have learned is really for your child, and they should exercise caution when talking with others. If you feel that your parents are probing too deeply into your child’s previous family history, tell them so — but gently. Observed Lois Melina, author of Raising Adopted Children: “I’m quite willing to answer people’s questions about the adoption process, the practices of different agencies, our reasons for adopting, and how my children reacted to what was a major change in their life. I consider information to be ‘private’ if it refers to a child’s genetic and social history.” Her rule of thumb: Would you readily share that same information about yourself?

Now you know the special resonance our family photographs have for me. In May 1979, three generations gathered and we took the first of many portraits for the Gilman family archive. Two years later, Jack and Dorothy welcomed a second grandchild from South Korea. Sadly, they did not live see both their grandchildren graduate from high school and go on to college, but we have photos of my mother Lotte at those events. My children have many memories of their loving grandparents, who came to love them as their own. These memories are the true legacy.

<
Previous:
When You and Your Baby Don't Speak the Same Language
Next:
>
Communicating With Your Baby
Authors
Lois Gilman