Q: We adopted our five-year-old daughter at birth. We send update letters/photos to the birth parents (who are not together) twice a year, and we get occasional updates from them both. Our daughter knows she was adopted, but doesn’t know she has younger half-birth-siblings. She’s been asking for a brother or sister, and we’ve explained that our family is complete with one child. I guess I worry about telling her about her birth siblings if she’s not old enough to understand why she can’t see them right now, but I also I don’t want her to feel like we were hiding information from her when she’s older. Any advice?

“I’d tell her now. Also, unless it is dangerous for some reason, start visits with her birth siblings ASAP. If your child knows about her birth siblings from an early age, this will just be what her family is, same as adoption. Since your daughter is interested in siblings now, why not tell her? If you wait, it will be harder for her—she will have missed out on bonding and years of relationships with her siblings. Think carefully about who you are protecting by hiding such important info, and unless there are very compelling reasons for secrecy—don’t go there (it only breeds shame and self criticism). This should be good news to her and you can all rejoice and celebrate it!”

“I agree. We adopted toddlers from foster care, and knew they had older half siblings on each birth parent’s side. None of them would be safe to contact due to concerns about their birth father, but I always planned to disclose this to them (even though my family thought I should just not mention the siblings). I told my children when they were about seven and five. My son, in particular, had been lamenting the fact there were no boys in our family, or even among his cousins. I just casually brought it up while we were folding clothes. ‘You know, you actually do have brothers and another sister…‘ I explained everything to them—where they lived, how they were related, why we couldn’t contact them at this point. It wasn’t weird to them at all. They were sad they couldn’t see them, but I told them that, when they are older, maybe things will be different.”

“I agree, tell her now. My daughter has a half sibling who was adopted by a different family. I really want contact, but the other child’s family is against it. I put the half sister’s photo in my daughter’s lifebook and told my daughter about her very soon after she came to live with me (she was 4 1/2). She didn’t express any interest at all, so I’m not sure she really understood. She is six now and I pointed out her sister’s picture in the lifebook again recently and explained who she was and that she had been adopted by a different family. My daughter was more interested and thought it was ‘cool’ that she has a sister, but didn’t ask any questions. She really wants a sister (and I’m trying to adopt again) but didn’t seem to expect any contact with this biological sibling.”

“I was adopted when I was 13 with my little sister, who was eight at the time. My parents always asked about my family from Russia so we won’t forget them. Now I write, call and have even visited them. It was great to know my other family. I’m very grateful that my parents did this for us. Tell your child. She deserves to know.”

“My kids have always known that they have siblings. We have pictures of them in our house. I don’t think my daughter really gets it yet, but she just turned three. I know my son understood at some point when he was three, because of this:

I came to pick him up from preschool one day. He came running across the playground yelling, ‘Mom, what’s my brudder’s name?’

And he ran back to his friends and said, ‘My brudder’s name is Iggy.’

I don’t think birth family is something kids should remember learning about. I think it’s something they should always know.”

“My five-year-old daughter has half siblings. The girls love each other tremendously, and it is wonderful to watch them interact. I don’t know whether or not my daughter will have a sibling in our home, but she does have siblings already. She’s always known she was adopted, always known about her birth parents and her older sister, and we told her about her younger sister when she was on the way. We have photos of the girls up in our house, as well as photos of my daughter and members of her birth family, and we visit with them on a regular basis. It’s what she knows, and we are glad she will have a bond from the beginning.”

<
Previous:
“But How Did He Know About My Mama?” 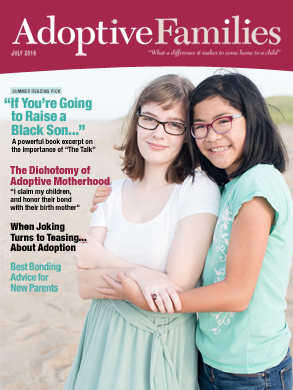 ON THE COVER: Sarah (18) and Abby (11, China), children of Sennu Maria and Scott, Florida. Photograph by Sennu Maria.

"Sisters Abby and Sarah have always been close. Sarah turned eight on Abby's adoption day in China, and ever since, their bond has been strong. I love this picture of them I took in Virginia last summer; it tells me that family and love know no borders." —SENNU MARIA