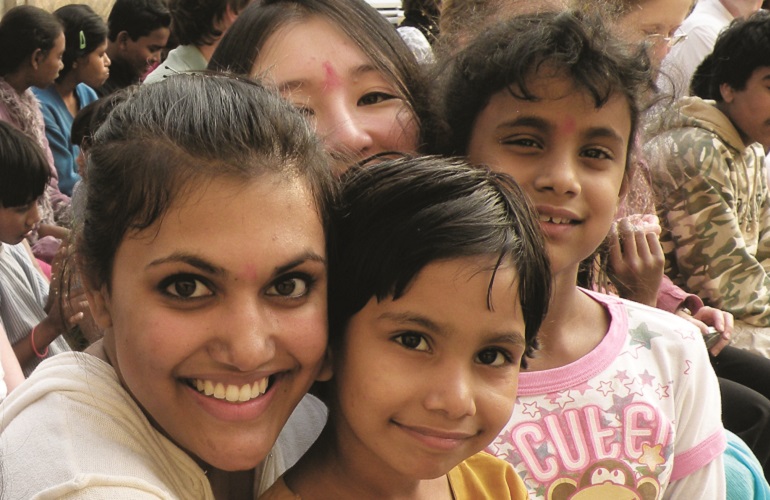 Each of us begins building our identity within a geographical sphere that centers on our place and circumstance of birth. Throughout our lives, that sphere expands to encompass all the places we go, experiences we have, and people who touch our lives. A unique identity emerges, and, like fingerprints, no two identities are ever alike. But unlike a fingerprint, identity changes as life unfolds.

As the founder of The Ties Program, I’ve witnessed children going through profound shifts as they explore their birth country. You can almost see their souls blossoming; I am frequently reminded of time-lapse films of a flower opening. What happens on these life-changing trips? Despite differences in the travelers’ families, life experiences, and the countries, I see many similarities in how and what children process during heritage travel.

Blending In, Standing Out

The first significant moment occurs when the kids step off the airplane. Beneath the airport chaos, you can almost hear them thinking, “Wow, everyone looks like me.” Over the next 10 to 14 days, children experiment with blending in by walking a few steps behind or in front of their parents. For most, it is the first time in their lives that they’ve had a chance to blend in.

[Back to the Land: Planning a Rewarding Heritage Trip]

The questions surrounding dual identity become more complex as the children understand they are not perceived as 100 percent Guatemalan (or Cambodian or Russian). Kids often say, “I thought no one would know if I didn’t talk.” They wonder, “Is it how I stand? Are my facial expressions different?” They may take a few steps and ask, “Do I walk differently?”

It’s a struggle, but one that brings kids to a better understanding of themselves. Carmen Knight, a Peruvian adoptee, said, “I started to see that I am like a chameleon. I can interact and sort of fit in with both groups, maybe not completely, but to an extent that I am happy with.”

Andrea Christensen, who traveled when she was 18, said, “In many ways, being Asian has been more of an issue for me than being adopted. People don’t look at me and know I was adopted, but they immediately know I’m Asian.”

A homeland journey cannot take away the pain of teasing or racial prejudice a child has experienced, but it can alter his sense of his “people.” Despite language barriers and cultural differences, when children are exposed to the warmth of those who share their heritage, it has a profound effect on the reflection they see of themselves.

On a Ties trip to Korea, we were drawing a crowd (as adoptive families frequently do when they travel) while shopping. We heard gentle chatter and kind laughter coming from a group of Korean men who stood nearby. Finally, one man could hold back no longer. He walked toward a seven-year-old boy named Ian and gently tousled his hair. Ian turned to me with a huge smile and said, “Mrs. Piper, aren’t Koreans neat?!” Over the years, I have replayed that moment in my mind many times.

Another wonderful transformation comes with the realization that white skin, blond hair, and blue eyes are not the only hallmarks of beauty. Once that barrier is broken, the lens turns inward to find love and beauty. Before we know it, we see a few of the adoptees holding hands, expressing affection where it didn’t exist before.

In addition to its revelations about race and culture, a homeland trip often presents an adoptee the opportunity to make more personal discoveries. For many children, visiting their orphanage or place of birth, meeting foster family, or seeing their name on a file or an intake chart, or a photo of themselves as an infant, validates their existence. This can be true even when the file reveals no new information. Christensen recalled how emotional she became: “I didn’t expect to find anything in my file about my birth family, but I think a part of me had hope. When there really was nothing, I cried, and I don’t usually cry.”

Although some adoptees meet birth family, and it is usually very healing, it is important to note that not all kids want to take this very big step.

When adoptees consider their origins, they confront loss. I refer to the process of soothing grief and letting themselves move forward as “linking.”

On one trip, nine-year-old Amy and her parents visited the clinic where she was born. That evening, Amy’s mother came to my hotel room in tears, saying, “Amy couldn’t have cared less. In the waiting room, she was all over the place, sitting in one chair, then another.” About 30 minutes later, Amy’s mom knocked on my door again, and, through her tears, said, “Amy just told us she sat in every chair in the waiting room so she could be sure she sat in the chair where her birth mom sat.” Linking.

We usually think of culture shock as the unsettling feelings we have when we go somewhere, not what we feel upon our return. Yet, many adoptees understand tough topics, like social stigma, government policies, and poverty, for the first time while in their birth countries. They often wonder, “Could that have been me?”

Emily Freeman, who was 15 when she traveled, said, “I was confused when I returned home, because I suddenly felt so different from my classmates, who were focusing on the latest fashion trend or cell phones. I hated seeing how much everyone had and how it was all taken for granted, because my birth country is so poor.”

In addition to feeling a strong, new connection with a birth country, adoptees usually form intense bonds with one another. “We all bonded on the first night,” recalled 15-year-old Nicholas Brunson. “We came here as strangers and left as a family.” I often think that is the greatest gift of the journeythe gift of community built around two worlds and shared experiences.

The process continues long after families board their return flights. Dan Pratt, 18, reflected, “It’s important to know where you’re from. It will always be a part of you. After seeing the place where I’m from, I appreciated the importance of my heritage.” Thirteen-year-old Andrew simply said, “I would describe it as finding a new me.”

[6 Questions to Ponder Before Making a Homeland Trip]