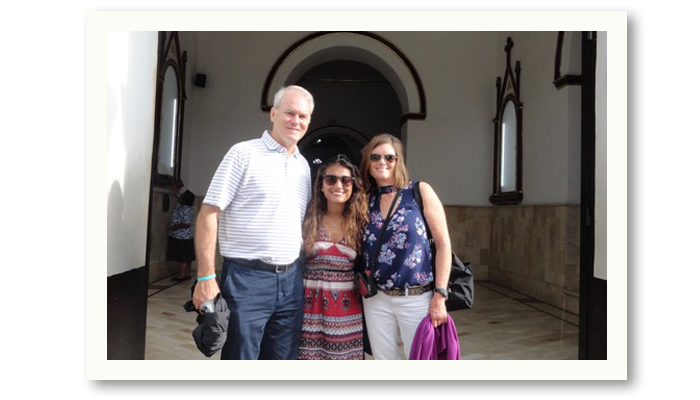 My daughter grew up with many questions about her beginnings and, for 20 years, only a grainy black-and-white ID picture to hold on to. We knew, even hoped, the day would come when the answers would be provided by the only one who could—the woman in that picture, who lived 3,400 miles away and spoke no English.

That day came closer when my daughter turned 19, and decided she wanted to meet her birth mother. Brigid sent a message and pictures of herself through a searcher, Vicky, and then we waited. We waited some more. “Don’t get your hopes up,” we said. Vicky had told us that Brigid’s birth mother moved several times to find work. She was scared to be revealed and her other children were unaware of their sister in the United States. After what seemed like an eternity, my daughter received a phone number and Facebook address—her mother wanted to connect.

Brigid knew the beauty of her birth country: the taste of a ripe mango grown locally, the proper way to hold and eat an empanada, the oppressive feel of humidity and elevation, the sights of lush green mountains, flowers too large to be real, bride-like first communion dresses and mountaintop crosses. We had visited Colombia several times. But she has not lived her culture and has not been familiar with her first home.

Over the months we spent preparing for the five-day journey, the questions running through our minds grew too big to put into words. The standard check-in line, “On a scale from one to 10, how do you feel?” seemed too small, too limited for the emotions we were carrying and it could not budge the weight of the nervous questions that piled up inside our walls of silence.

A Meeting That Was Meant to Be

When the travel day arrived, we ran through airports and diverted our attention with in-flight movies from Minneapolis to Miami to Medellin and on to Bucaramanga, the fifth largest city in Colombia. To add fear to our voice-stifling emotions, we burst from the airport in a tiny taxi going double the speed limit. The hairpin twists and turns over the mountain down into the valley too closely mirrored the unsettled feelings in our guts.

We arrived at the hotel at 8 a.m., three hours until we met Claudia, a real person with a name, a face. Thinking about her name was strange. For 19 years, I have been Brigid’s mother and Claudia has simply been her “birth mom.” A “birth mother” sounded limited, like a moment in time. A “mother” sounded like forever—an important concept to our daughter who perceived herself to have been given away. Brigid was seven weeks old when she came to us, so we had to help her put together the pieces of her beginning, which was complicated but needed to sound simple. At a very young age, she knew she did not look like me and her bedtime stories often included a far away second mom called a birth mother; “she carried you and now I hold you.”

Claudia had a three-hour bus ride to Bucaramanga and I said a silent prayer that she had gotten on the bus that morning. I needed to clear my head, to shore myself up for my daughter, and for me, and decided on a quick workout in the hotel gym. Buoyed by the gentle breeze wafting through the open windows, I put my in my earbuds, turned on the treadmill to a speed too high for my exhaustion, and let anxiety roll down my arms in beaded sweat. My thoughts moved from my daughter to the conversation we would be having with the woman who carried her for nine months. What would I possibly say to this woman? Thank you seemed wholly inadequate.

As I was about to finish my workout, my play list turned to David Archuleta’s “To be with you.” I had never heard the song; I must have unknowingly downloaded it from my daughter’s playlist on our home computer. The lyrics speak of two people living apart who have been longing to see each other. The moon bridges the space between them, but meeting is the only thing that will settle their internal restlessness.

Whether it was the workout-induced endorphins or Archuleta, a calm surrounded me. The lyrics summed up the longing in my daughter’s heart and the silence suddenly didn’t seem so loud. This meeting was meant to be.

My husband, my daughter, and I waited on the roof top patio, our glances darting toward the elevator door every few minutes. When the moment finally arrived, Claudia’s face reflected back my anxiety; two moms who loved their girl. Claudia approached, revealing my daughter’s smile, and hugged her passionately. After a moment, Claudia turned to me, wanting to break the tension as much as I did. I was startled by how tightly I wrapped my arms around this woman, a stranger who bore my child. I sobbed and cupped her face and told her she saved me and I was grateful beyond measure. Even though she couldn’t understand the words coming from my mouth, she knew the sentiment. Her tears answered for her.

We finally moved to a set of wicker chairs drenched in sunlight and let the light salsa music settle our jitters. Waiters curiously watched from a distance, then served us chilled Guanabana juice frothed with milk, one of our favorite local drinks. Just like Brigid, Claudia smiled constantly, mostly at Brigid, and stroked her hair. Her ache to wrap her child in and squeeze her and caress her was palpable. Brigid could only return the smile and say she was “happy” to see her birth mother.

Unsure what to say next, Brigid pulled out the photo album she had prepared. It offered her life in pictures: her birthdays, her first days of school, her love of horses, her Colombian dance troupe, her competitive cheerleading, her siblings, her grandparents, and her dog. Claudia slid her hand over the glossy pages, smiling, and I hoped she saw Brigid’s fearlessness, saw that our daughter is smart and hardworking and loved.

Through Vicky (our guide and interpreter as well as our searcher), Claudia gave a very unfiltered account of her burdensome, economically challenged 42 years. She became flesh and blood to us as she determinedly poured out her heart in nervous bits between staring at her long lost Susana, the name she gave my daughter. We thought a nurse had named her Susana, so we named her Brigid, an Irish name to welcome her into our Irish family.

Then Claudia excitedly related her recent recurring dream. She dreamed that Susana, whom she had not seen since the day she placed her in the orphanage, was pulling her out of a big hole that was swallowing her. A short time after Claudia began having these dreams, Vicky located Claudia and called her to say, “Your daughter Susana is looking for you.” From that day on, Claudia said, she felt lighter, her depression lifted, her blood pressure lowered. She too thought this meeting was meant to be.

As the afternoon rolled on, we took a taxi to an old colonial town on the edge of the city. Like so many colonial Latin American towns, the town square was framed with flowering trees and anchored by a brightly painted Catholic church. Claudia explained that this church was where she married her first husband. Inside, she prayed fervently to a gold statue of Christ and silently lit a candle in thanksgiving.

In the square, street vendors were roasting ears of oversized corn, a dietary staple, and selling fruits and sugary sodas. Scrawny dogs laid close by in the shade waiting for scraps. Children chased each other around the park benches where grandparents in wool sweaters and fedoras lounged and chatted.

As we strolled, Claudia wanted to know how we felt about her. She wanted to know how Brigid felt about her—maybe she wondered if Brigid would also call her “mom.” Claudia looked at us and said she wondered how Brigid’s life would be if she had stayed in Colombia—no education and likely pregnant at a young age. Her persistent question was “will Brigid come back to visit her?”

As we drove back into the city, we passed row houses built into the side of a hill, pink, blue, green, melon, each level separated by hundreds of steep stairs. One set of stairs led up to Brigid’s birth sister’s apartment where Claudia would stay that night.

My husband and I finished the day by attending Mass in a church without walls, a warehouse of sorts with colorful painted tiles and stones on the wall behind the altar. Children ran around the periphery as the congregants sang the Lord’s Prayer to a tune that sounded familiar. I could not place it because my senses were all overwhelmed. My ears were hearing one thing but my nose smelled unfamiliar mountain air mixed with smog and heat. My eyes could not fully take in the beauty of the culture I saw. My hands grazed the hard wooden pew while I thought the Mass sounded so much more beautiful in Spanish. As is customary, I offered a greeting of peace to Brigid’s and Claudia’s community. Finally, it dawned on me—the tune was Simon and Garfunkel’s “The Sound of Silence.” The day ended as it began, but this silence was content and hopeful.