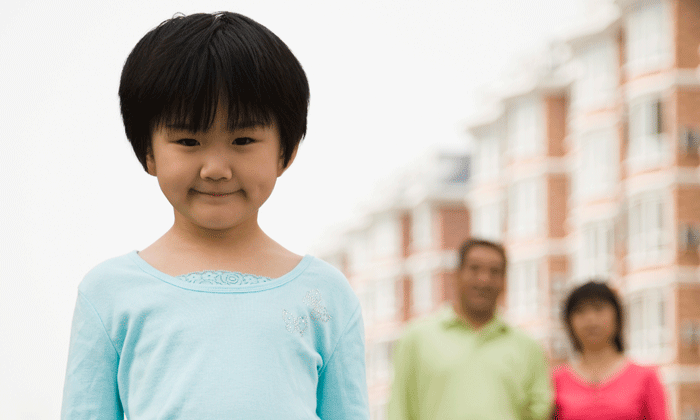 “For an adoptive family to truly accept their child, I think it is
important for the family to help their child create this culture
of their own. Parents have to realize that this child comes
with a history and background that cannot be erased.”

— Jamie, 16-year-old Chinese adoptee
who reunited with her birth parents two years prior

Interest in learning about children’s pre-adoption histories is on the rise. Over the past decade thousands of Chinese adoptees and their adoptive parents have returned to the People’s Republic of China (PRC) on “homeland” trips, often visiting orphanages and finding locations in order to learn information about their early lives. Research suggests that these trips may help children resolve a range of emotional issues and strengthen adoptive family bonds, while at the same time possibly raising further questions and creating more specific forms of longing.

Some of the families that have visited China on homeland trips have quietly taken their searching efforts one step further by attempting to locate children’s birth parents. Several high-profile reunions in the PRC that were featured in the mainstream media have also stoked awareness among adoptive families. Although there are no official statistics on the number of individuals pursuing a Chinese birth parent search, one online adoptive parent listserv devoted solely to this topic has over 500 subscribed members.

Few individuals have been willing to openly discuss their reunion experiences. Therefore, our study, which draws from in-depth interviews with children and adoptive parents from seven Western families who located and reunited with Chinese birth parents, represents the first study of its kind. (The full article was featured in the journal Adoption Quarterly, Volume 18, Issue 1, 2015.) Our interviews explored four main themes: First, why did participants choose to search, and which methods did they use? Second, what was the initial meeting like? Third, after returning home, what kinds of relationships did adoptive and birth families develop? And lastly, what advice would they give to others who are interested in searching? Due to the small sample size and variation in individual stories, these findings are not generalizable across all China adoptive families. Instead, because so little is known about the challenges and outcomes of this process, this study is attempting to provide a foundation for future research.

Motivations for Searching and the Methods Used

In-depth interviews revealed two major factors that motivated adoptive families to search for Chinese birth parents: wanting to find out the “truth” about a child’s relinquishment and wanting to resolve a child’s sense of emotional loss. Parents initiated five of the searches, while children initiated the other two.

Parent-Initiated Searches: Wanting to Find Out the “Truth”

Two sets of adoptive parents decided to search immediately upon or even before adopting their children. These parents both had extensive experience with China and a strong desire to find out why their daughters were relinquished. One parent described the sense of urgency prompting her to search, as Emma had been born in a rural area that was being rapidly developed:

“I’m familiar enough with China to know how quickly things are changing there…I don’t think that I thought her birth family would be findable at that point, but it was important to me to find as much information as we could get right away because I knew there was a good chance that it wouldn’t be available later.”

Emma’s father also stated that he felt it was important to search early due to the connection between one’s history and personal identity. Although he was not adopted, he described struggling with his own identity growing up. This led him to believe that, “If a kid understands their story from a young age, it doesn’t become some kind of ‘thing’ they have to process later on. It just is integrated into their identity when their identity is forming.”

Another mother sought to alleviate fears of trafficking. She said,

Parent-Initiated Due to Child’s Sense of Loss

Their children’s sense of emotional loss inspired three sets of adoptive parents to initiate searches in China without their daughters’ knowledge. One parent described her decision to search on behalf of her child:

“We decided to search when she started to really grieve for [her birth parents] and to be very upset at times [wondering] where they were and why they left her and thinking that they may not even be alive. She used to get so upset that I…wanted to be able to say when she grew up that we’ve done everything we could to try and find them.”

Research on adolescent adoptees in the United States has found that most do not actively begin searching until they reached adulthood. Perhaps ironically, the closed nature of Chinese adoptions eliminates these restrictions. Thus, with the financial and emotional support of their adoptive parents, two teenage participants made the decision to search prior to the age of 18.

One child who had been adopted at age seven initiated her search to resolve emotional loss and uncover the truth about her past. Though she had forgotten exact names, she recalled her parents’ profession and certain key details about her village. For years her adoptive mother kept detailed notes about her child’s memories but did not actively search, believing that it was her child’s choice. She explained, “I knew she had a history before the orphanage…I just wrote everything down with the intent that probably someday she would want to search.” The family emailed a Chinese volunteer organization that maintains a website for lost and missing children. Using her notes, the group was able to locate the birth family soon after.

In comparison, one 16-year-old adoptee was the only participant whose decision to search did not emerge from a sense of loss or questions about her past. Rather, she stated that she decided to search largely because her adoptive family was already planning a trip back to her home province. She explained,

“I was like, I’m going to China, why not? [My birth parents] are probably there [and I thought] I’ll find them at some point. It wasn’t any like longing. Because it would be nice to find them, I thought, but it wasn’t something I really needed.”

During the trip, they put up a poster at her stated finding site. Later the same day, a man claiming to be her birth father showed up at their hotel with one of her older sisters.

The Lived Experience of Reunion

Regardless of where they take place, these types of reunions are extremely emotional, unpredictable events. However, those that occur in China are further complicated by cultural and language differences, the young age of many adoptees, and the presence of adoptive parents. The theme that emerged from interviews was that of individuals not feeling emotionally prepared for the reality of reuniting with Chinese birth parents. Most participants claimed that their initial meetings produced a mix of both positive and negative feelings.

All of the reunions occurred in public places—usually hotels—and generally involved other parties besides family members, such as translators, guides, and even journalists. One adoptee met her Chinese parents alone in a hotel lobby for a short time before being joined by her adoptive family. Although she couldn’t understand what her birth parents were saying, she recalled her excitement: “I felt very happy when I saw them and it made me really nervous.”

Instead of experiencing the same delight, both sets of parents reportedly had a more difficult time during the reunion. According to adoptive mother, the girl’s birth parents were “very, very emotional. They felt so guilty because they had to give away their child…they were so afraid that she would hate them and would not forgive them.”

Another adoptee also stated that she was unprepared for the reality of reunion because she had thought the likelihood of finding her birth family was extremely low. She described her state of mind at that time: “I don’t think I had gotten to the point emotionally to be worried about anything. I thought it was like a fun adventure and such. I didn’t really realize the gravity of what was going on.” Later, she recalled going into a mild state of shock and feeling “pretty much numb” throughout her initial meeting with her birth father and sister.

Children’s ages also compounded the unpredictable feelings that emerged during reunions. Especially for younger children, adoptive parents needed to serve as mediators during the initial meeting.

Possibly due to the low awareness of international adoption in China, birth parents were often shocked to learn that their child had been sent overseas. However, many of the Chinese birth parents in this study expressed gratitude to adoptive parents. Dispelling many adoptive parents’ fears, none of the birth families sought to reclaim custody of their child, although all were eager to maintain contact in the future.

Reunions were an opportunity for individuals to ask questions about children’s lives before adoption. In all seven cases, individuals learned that strict family planning regulations had played a key role in children becoming available for international adoption.

Kay Ann Johnson has argued that due to son preference, most international adoptees are the second, or sometimes third, daughter in a family seeking to bear a son. Based on her findings, many adoptive parents in our study reported having expected their children to have one older sister and one younger brother. However, only one of the families in our study matched this profile, pointing to a much wider range of family types in China than commonly assumed.

Many children gained information about heredity, including details about their medical history and real birthdays. Both children and adoptive parents scrutinized birth relatives for similar physical and personality characteristics. One adoptee was gratified to see a strong physical likeness to her birth parents and noticed obvious physical similarities between herself and other relatives. She said: “They all share common facial characteristics and we all have the same smile. Thank you, DNA!”

The Development of Relationships between Adoptive and Chinese Birth Families

There was a disconnect between individuals’ expectations of reunion and the reality of managing long-distance ties with birth families. Because of the intense focus on the search itself, no one felt adequately prepared for what might happen after the initial meeting. While some adoptive families struggled in their communications, others were able to develop comfortable relationships. The families that were reunited the longest described being closer with birth relatives.

Everyone had kept in touch with birth parents to varying degrees since the initial meeting, both through in-person visits and virtually through email, Skype, and QQ, a Chinese instant messaging system. Five out of seven families reported that they spoke with children’s Chinese relatives on the phone every one to two months and used instant messaging. Six families had returned for at least one additional visit with birth relatives.

Lastly, we sought to find out how participants viewed birth parent search post-reunion. Everyone was encouraging but also urged caution; while all individuals agreed that searching could potentially bring about many positive outcomes, they also held a number of serious reservations. Specifically, adoptive parents mentioned the following factors: the unpredictability of what might be discovered, the importance of considering the birth family’s needs, and that adoptive parents should search early but only reveal information to children if and when they are ready for it.

For their part, adoptees were conflicted over who should have the power to decide whether or not to search—parents or children. While the children generally felt that the choice should be left to adoptees, two participants acknowledged how grateful they were that their adoptive parents had made the decision to search early on. In the end, one young adoptee summed it up, “It is good to search, but don’t let that impact your whole life…and don’t let that affect your being happy.”