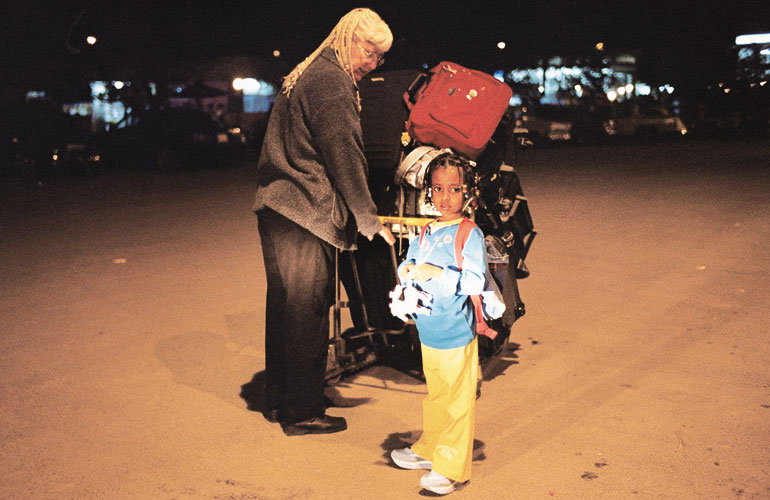 Last year, Helen, a shy and tiny five-year-old with huge eyes and a high-pitched squeak of a voice, was handed a package on the orphanage playground telling her that she had been matched with an adoptive family in America.

It was my husband and I who had prepared the presents while waiting for approval from the Ethiopian courts to bring Helen to America as our daughter. We have loved raising our children — four by birth and one by adoption. So when we began to muse about becoming parents again, it seemed logical to think about adopting from Ethiopia — Africa had been described in the newspapers we read as “a continent of orphans.”

Hair ribbons, two pastel-colored plastic ponies with brushable hair, a photograph album, turquoise sunglasses, and a pink T-shirt that said “Atlanta” spilled out of Helen’s envelope that day, five months before I visited. An adoptive mother, at the orphanage to take home her child, delivered Helen’s package and took pictures of the moment.

So many kids shoved and grabbed to see Helen’s photo album that it flew out of her grasp and traveled the length and breadth of the playground. Big boys called out approving comments to her. Though she couldn’t get her book back, no one damaged it, and she contented herself with the ponies, allowing her best friend to brush one of them.

Finally one of the big boys said, “Here, Helen,” and gave the book back, and Helen tucked herself away on her lower bunk bed and examined the faces of white people who had labeled the pictures: “Your Big Sister,” “Your Oldest Sister,” “Your Brothers,” “Our Dog,” “Your Bedroom,” “Your Father,” “Your Mother.” She looked at them with, and without, the turquoise sunglasses.

Helen’s parents had lovingly reared their only child, taught her to read Amharic and English at age four, planned for her future, and were separated from her by only illness and death. I learned of their devotion to her from friends of the family, who looked after Helen but were too old to adopt her.

Before going to sleep on the night she received her package from America, Helen propped open her photo album on the bedside table to the page showing the new “Mommy and Daddy” arm in arm, laughing and dressed in fine clothes. She laid her head carefully on the pillow facing the picture and fell asleep looking at it. It became her bedtime ritual.

How It’s Done in America

A few months later, I came to Ethiopia to meet Helen. When I showed up at the orphanage for the first time, she was too shy and alarmed to look at me.

I pulled bags of rocket balloons out of my purse — they blow up into long blimps, and when you release them, they zoom around and make embarrassing noises. The children began running wildly after them and screaming with laughter. I saw Helen watching us from across the playground, and for the first time in my presence, she laughed.

Although her hair was tightly, beautifully beaded and braided, she wore well-used boys’ orphanage clothes. A driver I had hired, Selamneh, and I took her shopping at a children’s store one evening, a boutique so small that most of its wares — toys and clothing — hung from hooks high up on the ceiling.

Helen instantly took possession of the shop. She shrieked with happiness and quickly pointed out her desires: a pair of shiny red sandals, an electric guitar, a toy gun, a bicycle, and a wedding dress. I said yes to the sandals, no to the rest, and pulled a different dress off the rack to show her. She turned her little nose up at it just like my children at home, who never appreciate my taste, and she selected her own dress, a complicated affair involving several layers and embroidered sheep.

She also bought pajamas, underwear, play clothes, and lacy socks with attached pink flowers. She opted to wear the socks to the apartment we stayed in during my visit. That night she scrubbed her new socks in the bathroom sink for half an hour, then hung them outside on the balcony to dry.

I opened a box of raisins one afternoon and handed her one. She examined it and ate it, and I ate one, too. Then I gave her the box of raisins to keep, and she zipped it into her new American backpack.

A few nights later, she and I were dinner guests at the home of an Ethiopian family. Helen excused herself from dinner at one point, went to find her backpack, unzipped it, extracted the box of raisins, carefully opened it, and, with great seriousness, handed each person in the family one raisin before replacing the box. That’s how they do it in America, she figured.

Last February, Merrily Ripley of Adoption Advocates International escorted Helen to the Atlanta airport, where my husband and I went to greet her and to take her home. She had memorized the photo album we had sent her and knew the names of the three older brothers, the two older sisters, and the dog.

She was too shy to speak to anyone other than nine-year-old Lily, who was closest to her in age, to whom she whispered in Amharic. (Alas, Lily could not understand a word of it.) An Ethiopian friend in Atlanta visited every day to chat with Helen. “I feel happy,” Helen told her in Amharic during that first week. And, “I forget the name of the tall brother.” And, “I don’t like cheese.”

Seth, 17, was enormously tall to Helen, but on her third night in America, she snatched a sock off his foot and fled shrieking with it through the house. He gave chase. She ran past me at one point, her face flushed with excitement, threw me the sock to hide, and then ran up the stairs to escape.

When Seth finally ambushed her and pried open her hands and searched her pockets, he discovered she didn’t have the sock anymore and she cackled with laughter. The next morning, she tried his name aloud. “Tzetz!” she yelled, then dove under the kitchen table with stage fright.

She quickly adopted the American attitude that there is no problem technology cannot solve, including the fact that she didn’t know how to swim. On repeated trips to the drugstore, she gathered essential items for weeks before the neighborhood pool opened, and on opening day, she emerged from the locker room encased in a foam life jacket, arm floaties and scuba-diving goggles, snorkel, and pink flippers.

She flip-flopped to pool’s edge and bravely dropped into the water. She wore so much equipment that she bobbed along the surface like a water bug, unable to submerge herself. Finally she pitched forward and dunked her head, so all that was visible was a tiny rear end moving across the pool like that of an upended duckling searching for fish underwater.

Another time, Helen showed up at my bedside in the middle of the night, saying, “I had a bad dream.”

I opened the covers. “Come, lie here. Go back to sleep, and you’ll have a good dream.”

“How do you have a good dream?” she asked.

“Well, you think of a happy place, and then you’ll dream about the happy place. When I was small, I used to imagine a little place in the forest where animals lived.”

I so wanted to go back to sleep, but there seemed no way around it. “Is it the beach?”

“The forest, with the little animals?”

“It’s Target!” she cried and snuggled down to sleep.

“I Wish I’d Known You Then”

But it hasn’t all been happiness. For at least an hour a day, for the first month after arrival, Helen was consumed by grief. We could see it coming on; we could see her trying to resist the approaching waves of sorrow. Finally they would overwhelm her, and she would begin to suck and suck and suck in air. Huge sobs and tears shook her, but she allowed us to try to comfort her. We would hold her, and she would wail with sadness.

Our Ethiopian friend translated for us that she was homesick for her friends in Ethiopia. Adoption Advocates International sponsors an annual reunion of Ethiopian kids adopted by American families. This summer, Helen was reunited with many of her pals from Addis, and I easily promised her that many more are coming to America and she will see them again.

But eight-year-old Eyob was also her friend. They lived in the same orphanage for a while after losing their mothers, before blood tests separated them.

“This is my friend,” she says about Eyob’s photo, laughing to remember how funny he is. But Eyob is H.I.V. positive and living at an orphanage that has no drugs. I can’t promise my daughter that she will see Eyob again since he, like so many others, has been left to die.

One day not long ago, she collapsed in my arms to cry about her late mother. I held her as she writhed, wailing, “Why she had to die?” A few moments later, she said, amid tears: “I know why she died. Because she was very sick and we didn’t have the medicine.”

Helen has made lots of friends in America and loves to chat, in fluent English, with all her new neighbors and classmates. I always hear her ask, near the start of every play date, “Do you have a mother?”

If she is feeling shy, she will whisper to me, “Does she have a mother?” Most children and adults are surprised by the question — ”Of course I have a mother!” they reply — but African friends are not surprised. Helen has a mother again now, too, as she is eager to tell, but she doesn’t take it as a given about anyone.

<
Previous:
A Mother's Day Ritual
Next:
>
"The Second Half of My Life"
Authors
Melissa Fay Greene