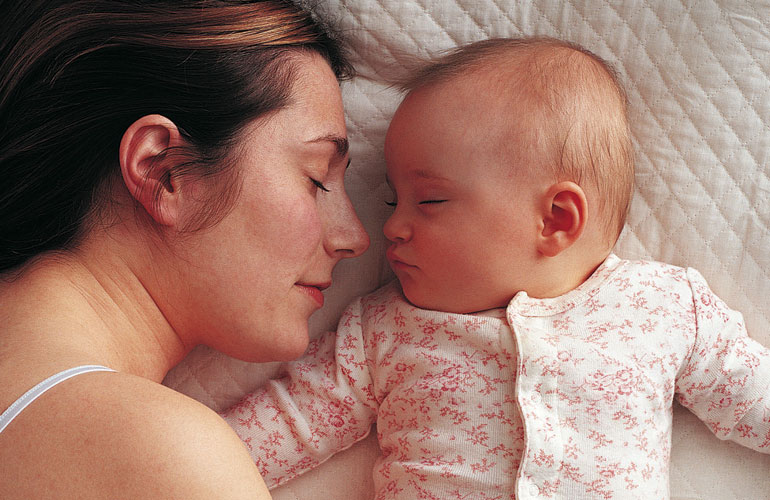 While Teri Henick was waiting to adopt her newborn daughter, she faced one of the fears most common to adoptive parents — would she be able to bond with this baby?

“I was extremely concerned about it,” she remembers. “Would I be able to love a person as much as I would had she come from me? What if there was no connection between us?”

But Teri needn’t have worried — after a few days of parenting her daughter, the connection was there. “I held her close, and adored the feeling of her tiny body resting on my bare chest. I sang, talked, and cooed to her at her feedings. These moments helped shape us into a family.”

Many of the techniques Teri knew intuitively to use — holding her baby against bare skin, interacting with her during feedings, and cuddling her for hours — are major components of attachment parenting, a hands-on, responsive philosophy espoused by experts like California pediatrician William Sears, M.D.

Attachment parenting is becoming an extremely popular parenting style in the U.S. — and it’s a philosophy that’s especially well-suited to parenting an adopted child.

Attachment parenting is about being in touch with your child’s needs. Parents minimize time away from their child, and carry him or her constantly in a sling. Breastfeeding is encouraged through the toddler years, and attachment-parenting advocates employ the “family bed,” in which babies and parents sleep together.

“Mother Nature has programmed us to know what our babies’ needs are, and to be able to meet them,” says Jan Hunt, psychotherapist and author of Natural Child: Parenting from the Heart. “We fool ourselves into thinking that [modern parenting techniques] must be better because they are new. But our babies are still in the Stone Age, and they have Stone Age needs.”

Whether your child’s age is measured in hours or years, attachment parenting can be adapted to fit his needs. Here’s how.

Prepare for your child’s arrival.

Get ready in every way possible before you meet your child. Check out books and Web sites geared toward attachment parenting, and make sure you have everything you need — whether it’s a baby sling or a well-stocked refrigerator to avoid post-placement grocery shopping — before your child arrives.

For some adoptive parents, getting ready includes learning more about bonding and baby care. “My biggest fear of adoption while I was waiting was whether I could bond with an adopted child as closely as with a [biological] child,” says Jennifer McNabola, an adoptive mother in Arlington Heights, Illinois. “To help myself overcome that fear, I went to adoptive parent panels to hear them tell their stories. They reassured me that bonding could be very strong with an adoptive child.”

“I pumped prior to our anticipated arrival date and drank fenugreek tea to try to prepare my body. On arrival home from the hospital, our first feeding with the supplemental nursing system was wonderful! Over the next few weeks, my son and I struggled with what I called the ‘contraption.’ But our pediatrician wasn’t very supportive of nursing, and when my son didn’t gain weight as quickly as she expected, I used bottles. Still, I have never regretted my attempts to nurse him, and I think it helped the two of us to bond.”

If breastfeeding isn’t an option, feedings can still nurture your attachment. “My husband and I always held our son close in our arms or on our laps when giving him a bottle. We gazed into his eyes, speaking softly and lovingly to him,” says Pam Reeves, an adoptive mother in Dallas.

“Even after he could hold the bottle himself, we continued our feeding ritual. He let us know that he treasured this time by pushing one of us onto a seat and climbing up on that person’s lap to snuggle himself into position. Eight years later, I remember that precious time and I believe our feeding ritual was a primary factor in establishing the very strong bond that we have today.” Make mealtimes a family activity and make touching, holding, and hugging your children normal occurrences in your home.

If the child is an infant or a toddler who is comfortable with it, use a sling or a front-wrap carrier for transportation, and have lots of skin-to-skin contact.

“I brought my daughter home from the hospital, where a wise nurse told me I needed to ‘kangaroo’ in order for my baby to know my heartbeat and my smell,” says Michigan mom Helayne Dorsey. “The nurse advised me to remove the baby’s clothing down to her diaper, remove my shirt, and lay her on my chest.” Now, two years later, Helayne says, “We are so close that people who are not aware that our family was formed through adoption would not guess how we got our start.”

Another mother used a soft-wrap carrier for her recently adopted two-year-old. “She needed to be on my body to attach well to me.” Her toddler snuggled into the carrier, which distributed her weight along her mother’s body, and they both enjoyed using it for many months.

If a new arrival is too big to be carried, physical closeness is a good substitute. “If you have an infant, a sling is a wonderful way to foster an attachment,” says Ronny Diamond, a social worker and family therapist at Spence-Chapin, an adoption agency in Manhattan. “But it’s not the only way.” Holding your child on your lap as you look at a book or holding hands while walking through your neighborhood can create closeness.

Avoid frequent or prolonged separations from your child.

Attachment-parenting advocates believe that frequent or lengthy separations interfere with the development of secure attachments, so they stress logging lots of time with your child.

For Sally Claffey, constantly being within arm’s reach of her adopted son helped create a bond. “We held him often, did some kangaroo care, and sang a lot. He slept in our room for the first several weeks. We talked to him all the time and did baby massage,” she says. “Most important, we did the thing that all new parents do with their babies, adopted or not: We loved him with all our hearts.”

Minimizing time away from your child can be especially important if your child’s history makes him uncomfortable with physical closeness. “Kids living in orphanages don’t know a thing about attachment, but it’s expected that they’ll know how to hug and kiss and feel comfortable with touch,” says Jane Aronson, D.O., a Manhattan pediatrician who specializes in adoption issues and is known as the Orphan Doctor.

Instead of forcing an intimacy that may feel threatening, many adoptive parents take time off work to make sure their new children feel secure, and they minimize contact with other caregivers. Dr. Sears recommends that new parents borrow money if they have to in order to stay home with a baby during his first year of life.

Since some adopted children come from a difficult past, shouting, spanking, or even sending a child to his or her room can be devastating. “These children need to learn that being close to adults doesn’t hurt,” says Diamond. “A spanking confirms that the child isn’t good.”

For Marijke Breuning, an adoptive mom in Minnesota, attachment parenting with her two girls meant using a less threatening version of the classic “time-out” chair. “For discipline, we sat the child down on a small chair in the room in which we were,” she says. “Sometimes we’d leave the room to gather our composure, but the child was never sent away to her room.”

Consider sharing your bed — or at least your bedroom.

The most hotly debated element of attachment parenting is the family bed, in which parents and children sleep together. Advocates argue that most of the world co-sleeps, and that leaving a baby alone in a separate room is an unnatural, modern invention. “This is only a couple of hundred years old, this practice of having children sleep alone,” says Hunt.

It seems that many Americans agree. According to the Sears Web site, about half of American families are now co-sleeping. Rosemary Goussios thought co-sleeping was best for her family. “I was accused of ‘spoiling’ my child because I held him so much during the day and let him sleep with us at night. Something worked, because he’s always been very attached — even at age six, he’s still cuddly and huggy.”

But as part of its efforts to reduce the rate of sudden infant death syndrome (SIDS), the American Academy of Pediatrics (AAP) recently repeated its stance against bed sharing. But even the AAP does not suggest that co-sleeping causes SIDS, say the Sears on their Web site. “We should focus our efforts on teaching parents to do this safely instead of trying to get them to change their parenting instincts and use a crib.”

Many adoptive parents initially put their baby or toddler into a crib, if that’s where the child had slept in the past. But this arrangement often changes. “It took us a year to start co-sleeping,” says Alicia Messing, who carried her adopted daughter in a sling from the moment she first held her.

After months of night terrors, her daughter finally began to sleep in her parents’ bed. “The night terrors have disappeared and we’re still co-sleeping,” says Messing. “She’s over four now and we have no plans to change this arrangement.”

For parents who don’t want to bring the baby or toddler into the bed, there is a middle ground that’s approved by the AAP: Parents and babies can share the same room, in separate beds. For Kiara and Andy Howerzyl, having their daughter sleep in their room was a benefit for them and their new baby. “She slept in a cradle in our room until she was four months old. Knowing we would know if she needed anything helped my husband and me sleep better.”

Becca Rausenberger has spent more than a year in this middle ground, with her toddler sons, adopted from Ukraine, sleeping at her bedside. What impressed her was the comfort each boy seemed to take in being able to see his parents. “I’ll hear them in the middle of the night. One will stand up, look at us, and then lie back down.” They just need to know their parents are there, she says.

Be responsive to your child’s needs.

One doesn’t have to be a diehard attachment parent to appreciate the wisdom of the most important tenet: Being emotionally responsive, trusting a child, believing that the child is “doing his or her very best at all times,” as Hunt puts it, is an approach many parents take.

To be emotionally responsive is to have a check and balance system — it allows parents to try different methods and arrangements to see what works best for their child and family. As one mother put it, “I look at my daughter and I know in my heart that she would not be so well-adjusted if I had not practiced attachment-style parenting.”

Maintain balance in your family life.

Attachment parenting can be rewarding — but all that togetherness can take a toll on your other relationships. To avoid burnout, parents need support and help, and grown-up time on a regular basis. Arrange for a “date night,” to enjoy time alone.

For example, Rausenberger spends her boys’ nap times doing things for herself (such as scrapbooking, e-mailing, or reading), attends a weekly Bible study, and spends one day a week by herself. “Over time,” she says, “I have found that, if I miss these things, my level of patience goes down considerably. Attachment parenting doesn’t have a lot of room for a grumpy mama, so I keep these things a priority.” By nurturing yourself, you’ll have more energy to devote to nurturing your family.