On becoming a parent:

I didn’t carry you inside of me, but once I learned of you I diligently checked off the necessary tasks; I remotely stalked the staff at the U.S. department of immigration, following the paperwork trail each step of the way until all of the appropriate permissions were granted. I learned a language of international adoption acronyms I never imagined existed—a paperwork bridge to parenthood built on the unimaginable loss of people I had never met. I was a recipient of privilege of which I was blissfully ignorant at the time, giving little thought to the imbalance of power inherent to the “transaction” which brought us to you.

I didn’t give birth to you, but I held you tight and attempted to entertain you on a 13-hour flight when you barely knew me. I was christened into motherhood covered in toddler vomit and poo, and with a raging case of pink eye, by the time we landed on U.S. soil.

I did celebrate many of the traditional parenting milestones: first words and birthdays and preschool and first sleepover at your auntie’s house. I also rejoiced in the non-traditional milestones only understood and appreciated by parents of children who have experienced early life trauma, such as feeling secure enough in our attachment to allow me to drop you off at the door of your elementary school, like the other kids. Until then, the morning “leaving” had tugged at a traumatic ghost of a memory of loss and abandonment that your sweet little mind couldn’t make sense of, no matter how many assurances you were given that I’d be right there when you were done for the day.

I watched you grow and develop your own interests—a keen sense of fashion and taste extraordinary for a kid of seven or eight. When others were pleading for the latest video game you were perusing the Internet for custom-made, replica Michael Jackson jackets. You also displayed an inherent talent and confidence on the stage that came from somewhere deep within you.

Through middle and high school, I watched you change from child to man. I worried about the “typical” things, such as grades and peer relationships and drugs, peppered with the atypical things, such as any genetic secrets that might impact your health or potential, for either good or bad. As an adoptive parent, I would increasingly see and wonder about biological influences, and learn to celebrate and accept you for you—your ability to dance, advanced sense of humor, charisma and stage presence were most certainly due to genetic influences. I would increasingly see my “nurture” role as supporting and chasing down your “nature” gifts.

I didn’t accompany you on college tours but I watched you leap across stages and tracked your flights from afar as you traveled the world preparing for a career in entertainment that few will have. You passed on senior prom in order to be a part of an elite classical ballet training opportunity. While your peers were busy having their “lasts” of high school—last home game, last school dance, and thinking of their first college party and potential majors, you were researching ballet companies and signing up for auditions. And once again I found I had mastered a lingo of acronyms I would have never guessed about in a life before parenthood. 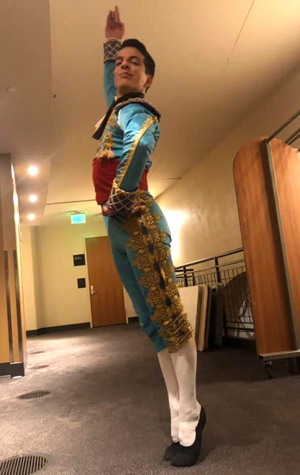 Now that you are a young adult I am learning to parent in new ways. Parenting from afar and striking a balance between respecting autonomy and providing support. Watching you soar and stumble and get up again. As a mom, it’s exciting. And terrifying. And beautiful. And sometimes heartbreaking.

No mommy mentors told me about this part—the letting go. Or maybe they did and I was so caught up in the day to day that I heard them but failed to feel the message.

I can honestly say that, when I pictured being a mother—long before I knew building a family would mean flying on a plane halfway around the world and going to court in another country—I couldn’t have possibly imagined how beautiful and difficult it would be. I didn’t grasp the impact early life trauma would have on my definition of success in parenting. And, after multiple failed IVFs, at the height of grieving the loss of a biological child, I never would have thought that, 19 years later, I would feel sick at the mere thought, “What if that treatment had worked?” Because if it had, I wouldn’t have you. You are my child and anything else is unacceptable. When I pictured being a mother, I never would have pictured this path. But looking back, I can’t imagine traveling any other.

Shelly Roy, LCSW, a licensed clinical social worker at with the Chicago Public Schools, is the mother of two children adopted internationally. Her son is a professional ballet dancer with Colorado Ballet.