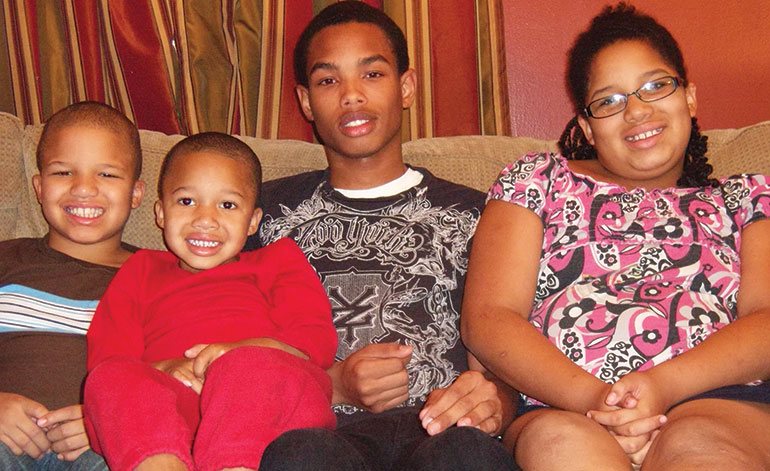 When I was younger, I imagined getting married, having children, and then adopting. With the first two checked off, my husband, John, and I took the first steps to adopt. In my job as a social worker, I see that younger children in foster care are adopted quickly, while teenagers linger in the system. Still, we had never considered adopting a teen until we were approached about a 15-year-old named George.

Despite our hesitation, we agreed to meet with George and his caseworker. George was so shy and quiet, my first thought was to take him home and protect him. After hearing about us, he said he wanted to know “something bad” about us because we sounded too good to be true. I told him that I sometimes yell and that our home can be very loud. He replied that it was so quiet in his foster home, loudness might be good. Our three children were excited when we told them about George, and we agreed to visit him again. Several weeks (and visits and sleepovers) later, George moved in with us.

[Free eBook: Is Foster Adoption Right for My Family?]

The Honeymoon, and After

My husband and I knew to expect a “honeymoon,” when life with George would be great, then a new phase, when George would begin to test our commitment as parents.

One of the first tests came when we discovered that George had been sneaking into the kitchen late at night and eating large amounts of food. We told him he didn’t have to do that, because he will never be denied food in our home. It took nearly a dozen late-night meetings in the kitchen, and many more reassurances, before we passed that test.

Next, we discovered that George was stealing money from us. It wasn’t a lot of money, but the fact that he was stealing wasn’t OK. I told him that if he needed money for something, he had to ask for it. I grounded him, and the stealing stopped.

Then my daughter, Jordyn, came crying to me one afternoon, saying George had hit her. When I confronted George, he admitted he did it, because she wouldn’t stop singing “George of the Jungle.” I explained to George that it was not OK to hit her (or anyone else), and explained to Jordyn that it’s not OK to tease, and that she should have stopped when he asked her to. A few minutes later, I heard George throwing things around in his room. I went to calm him down, and found that he’d broken a lot of his stuff, and a few of the other kids’ things. I let him know that he needed to talk about how he was feeling, and not hit, get upset, or destroy things. I grounded him, and we moved on.

In between the tests, I was worried that George didn’t truly feel at home with us. Finally, about eight months in, I began to feel that he was accepting us. After a snowstorm, George took the kids sleigh-riding and spent hours with them going up and down the hill. And when everyone was rewarded with money for good report cards (including George, who brought an F up to a B+), he took them to the store to spend their money.

We had made it through the testing phase. Or so we thought.

One evening soon after, George and our eight-year-old son, Jared, had a huge blow-up. John and I stepped in and lectured both boys. The next morning, George skipped breakfast and left for the school bus without saying a word. I figured he was still angry and needed time to cool off, but when I went to his room, I saw that he had packed all of his belongings.

When George came home from school, he went straight to his room. My plan was to ignore him, because I didn’t know what to say, but John suggested, “Just ask him what his intentions are.” George replied, “To stay,” so I asked him to unpack and finish his homework.

George had a therapy appointment that evening, and, in the car, I told him that he was a great kid with a lot of potential. When I told him that he deserved to be happy, with a family who loved him, he started to cry. I told him that we all care about him and wanted to adopt him. I encouraged him to find a way to open up to us.

A few days later, an idea popped into my head. I said to George, “I have to write about my experience with you being a part of our family. I’d like you to write about your experiences, too, about living in foster care and joining our family.” He didn’t hesitate, and wrote the following:

“My experience in foster care has not been good. It’s upsetting to live in a foster home for a long period of time, when the people don’t get to know you. My biggest problem right now is that my adoptive family thinks they know me, and what I’ve been through.

“If they did know me, they would know that I did not have a father to teach me the things that a normal child would have known. Growing up, I had to learn these things on my own, which was not easy. I’m still trying to learn. If this family took time to get to know me, and for me to get to know them, everything would be better. As for being adopted, I don’t know, because this feels the same as living in a foster home.”

I wanted to explain to George that I had been trying for months to get him to talk to me. I wanted to remind him that we have had talks about his birth family, and about how he feels. The truth is, these efforts didn’t satisfy him. Looking back, I see that I did most of the talking, along with some lecturing. There were times when I told him I knew how he must be feeling, and what his feelings were. Sometimes his eyes would fill with tears, and, thinking I had hit a nerve, I would go on. All I wanted was to make him feel good about himself. I honestly thought I was doing everything right.

That night, George and I talked for a long time. I asked him questions, and he answered them freely, happy to set the record straight. This time, I did the listening. George let me know that he wanted to talk about his past. He wanted us to know the “real” him, and he wanted to know the real us. Not just the fact that we wanted to adopt him, but our childhood experiences and how they made us who we are today. George wanted to be connected to us.

I felt like I was starting over with George, after eight months. And that was OK. This time we would do it his way, knowing that he believed in us, his family.

<
Previous:
A Place to Call Home
Next:
>
How to Adopt from Foster Care
Authors
Tanya Reid