My biological brother (from my father and a different mother) was adopted at birth. As an adult he found me and we met—but I wish we never had.

Don’t get me wrong. Under different circumstances, we might have been friends. But having the role of “sister” placed on me, before he even knew me as a person, was too much pressure for me. And I folded.

Pressure to Be a Sister

When my biological brother first entered my life, I was in the middle of a move from the country to the city. My husband had just gotten a new job that took him away from the family for months at a time, and our marriage was hanging on by a thread. But it isn’t every day that your father’s oldest son, who was adopted at birth, finds you! I exerted myself physically, mentally, and emotionally to join with the family in welcoming him.

And he expected to be welcomed. After conversing by phone and email, he made plans to come to meet all of us—but at some point during the planning and discussion, he expressed disappointment that I hadn’t yet traveled down to see him. I was taken aback. I didn’t have the time or money to make a trip, and had other demands on me. I couldn’t understand how someone could expect that I would just get on a plane and visit.

In his pre-trip email, he suggested that “Surely, between three sisters, [he] ought to have place to lay [his] head.” I had a small house and was not entirely comfortable hosting a stranger—even one called my brother. Though I felt badly, I could not provide that for him. My younger sister stepped up to the plate and offered him and his family a place to stay. She handled it graciously.

The second time he and his family visited was a year after my oldest son passed away. I suppose he thought I should have been over it. Many people thought that. I tried to show up for him during that visit, to entertain and act like a perfect family, but I was still bleeding emotionally. It was exhausting and invalidating. During a car ride out to my parent’s place, he made some remarks about my husband and how he “seems like a guy who’s hard to please.” I was still deep in shame and pain after my son’s suicide. I didn’t need anyone else looking down on my family or life.

Just over a year later, my brother announced that he’d be coming for a third visit. He, again, asked for a place to stay on his way to my parent’s place in the country, and this time I obliged. I figured it was my turn, and we had just moved into a bigger house. We even went out and bought a bed and new blankets and sheets.

Even though I would be hosting him in my house, I decided to put up some emotional boundaries for myself this time. It had been just two years since our son’s death, and my life was still in transition. My husband was just beginning to open up about sexual abuse in his childhood, and we were both examining our upbringings and trying to change old patterns that were destructive to our family.

Newsflash to my brother: You had parents who wanted you, who were ready for you, and provided a stable middle class life. I know that no family is perfect, but perhaps you didn’t get the short end of the stick. But…back to his third, and final, visit.

One week before his trip, he called me late at night. He said that my email to him was “vague,” that he was looking for a more enthusiastic response to his upcoming visit. I knew what he was talking about. I had offered him a place to stay, nothing more. I wasn’t rude, I just didn’t have a fully open heart, as I had in the past.

His voice was pleading as we spoke on the phone. “What are your passions...?” he asked, saying he wanted a chance to get to know me. I am a counselor (and a long-time enabler) and I have a soft spot for anyone asking for help. I truly did want to get to know him as a person and told him I would take a day off work to be available to him.

That day of one-on-one time with my brother never happened. Instead, both my parents came over and I let myself get swept up in family responsibility. All of the boundaries that I had carefully planned went out the window as I fell into the uncomfortable role of daughter and sister, heavy with baggage. And then I poured wine on top of it. And just when I was about to get through the evening with a strained, but still smiling, face, I cracked.

I had been making polite small talk with him (I hate small talk), and asked how it was for him to have so many siblings. He has three sisters in the family that raised him, five siblings on his biological mother’s side, and three sisters in my family. I couldn’t see how he could have true relationships with so many people and was still trying to get my bearings—what was my role exactly? Was it just to play host every couple of years when he came to visit? A true relationship is give and take. A true relationship includes some rain, not just sunny days. I didn’t say any of that, even though I was thinking it. I just asked how it was to have such a big family.

“I feel so lucky!” He said. He liked having so many people to call family. And then he asked me. “How is it for you, getting to know me?” I could have kept my cool. I could have offered a polite, but insincere, response. Instead, I opted for truth. “I don’t know you!” I told him. And with that first tear in the seam, words ripped out from me. It didn’t have much to do with him—after all, I didn’t really know him—but I felt tied to a responsibility to be a “sister” to him, and that hook pulled up all kinds of emotions from the deep sea of my childhood. Isn’t that what brothers and sisters do? Swim in the same childhood pool?

I let loose a stream of tearful, nonsensical words. In a way, I was trying to get him to see that we weren’t a perfect family. I also wanted him to see that, comparatively speaking, he had been given some pretty good opportunities. I wouldn’t trade my childhood; that’s a futile wish and my upbringing made me who I am, but my early years include murky memories of drugs, booze, fights, threats of suicide, and unmentionable things. We’ve all come a long way, but I’m still learning how to be autonomous within my larger family. That’s why I wanted one-on-one time with my brother, so he could get to know me as a person, not just a figure in some family fantasy.

If I Could Do It Over…

We have not spoken since my emotional outburst, though I have apologized profusely. I’m not proud of myself for breaking down, but the fact remains that he came into my life at the most inopportune time, and I didn’t feel I had a choice.

If I had it to do over again, I would have stood back until I was ready. I would have treated him as the stranger he was until we became friends. Instead, I hopped on board the family welcome wagon and tried to play my part in making a good impression on a man who is my father’s son and, thus, my brother. I was intensely uncomfortable with playing this role of sudden sister, however, and didn’t perform it well.

I truly wish my brother well. He seems to be a very smart and successful man. He is college educated, has a big house, some wealth, and is well traveled. His daughters are beautiful and well cared for. His wife is cute and spunky. They are the kind of people I would like to meet. It’s too bad we couldn’t have met as people, rather than as family.

Since my falling out with my brother, I have done some research into the world of adoption. This may not be new information, but some advice is so prudent it bears repeating. Before meeting a biological relative, consider the following: 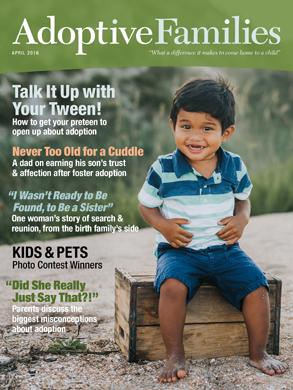 ON THE COVER: Paxton (2, Thailand), son of Ashley and Jason, Florida. Photograph by Meredith Black Photography.

"This photo was taken on our son's second birthday. He has such a fun and playful nature! We loved this photo because it captured his mischievous grin just before he ran off giggling, hoping to be chased. When I see it I can almost hear him squealing and laughing with delight." —ASHLEY