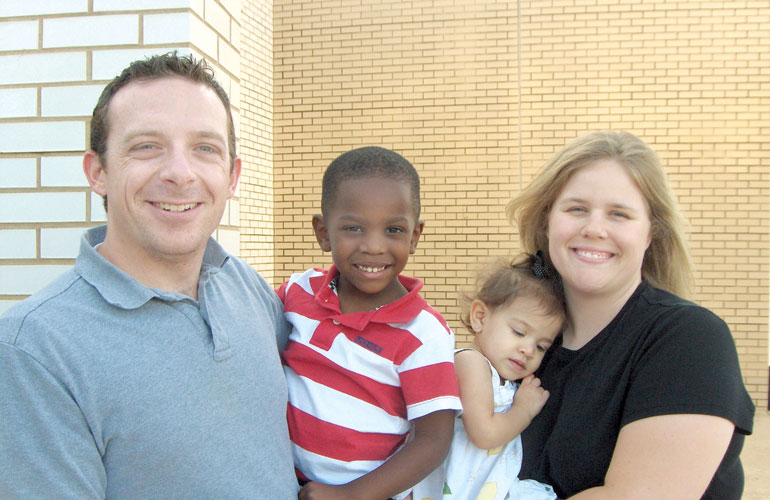 When we became parents to our two multiracial kids, my wife, Laurie, and I became a novelty to friends and acquaintances — and to strangers we met in the grocery store. At first, I was somewhat sympathetic to the staring. If I had seen a white man chasing a small black child, who was crying and screaming, “I want my Mommy!” through a crowded restaurant, I’d want an explanation, too. But as the child’s parent, the staring makes me eager to claim Isaac as my son. “I love you, son” or “Hold Daddy’s hand,” I announce loudly when I see someone looking our way.

Questions and comments, however, generally require a response. My lot is to endure blunt questions, like “Why did you adopt? Do you shoot blanks, or something?” or “Do you wear boxers or briefs? I’ve heard briefs can really mess up your count.” My wife undergoes a subtler get-to-know-you interrogation.

The other day, Laurie took our three-year-old son and baby daughter with her to a new moms’ lunch group. The conversation began when one mom asked my wife, “So, how long have you had the baby?”

“Since birth,” my wife said. “Her birth mother asked us to be in the delivery room when she was born.”

“Did it cost a lot?” another asked.

Each time we’re asked the money question, we think of asking if the interrogator’s hospital bills were high. But my wife calmly responded, “All adoption agencies charge a fee for their services.”

“If you mean her ethnicity, our daughter is multiracial.”

“She is part Caucasian, part Hispanic, and part African American.”

“Now, how does that work?” The woman was obviously struggling with the math required to understand more than two races.

After the moms had satisfied their curiosity about our daughter’s race, the talk circled back to adoption. “I hope you don’t mind my asking, but why did her mother give her up?”

“Every birth mom has a different reason for making an adoption plan. Often, she realizes that she doesn’t have the resources to parent a child for the next 18 years or so.”

“Is that what happened with her?”

The new moms didn’t seem to be picking up on Laurie’s discomfort.

“We don’t discuss our children’s stories with other people. We’d like them to decide with whom they’ll share details when they’re older.”

“Was her birth mother young?”

“I just wonder what kind of person….” the woman caught herself. “Well, I can’t believe anyone would give up a baby who smiles so much.” As my wife pondered a response, another mom asked, “So, you still have contact with the birth mother?”

“Somewhat. My husband and I have an open adoption.”

“Is that weird?” someone else asked.

“Why would it be weird?” my wife inquired.

“I just think it would be too hard to see her holding the baby. I’d get jealous.”

“Well, she’d be holding my child. Besides, she hasn’t seen the baby since birth.” At this, all of the moms let out a sigh of relief.

But soon enough, they asked the inevitable question: “Did you try to have your own kids?”

“Well, these are my own kids,” my wife said. The leader began to fumble over her words. She knew she had asked an inappropriate question. Laurie is always kind enough to bail out someone who’s just said something stupid, so she replied, “Did you mean to ask if we tried to conceive?”

“We tried for a year before we realized that God was calling us to adopt.”

“We’ve always talked about adopting,” someone chimed in. We hear this a lot, too. Mothers, in particular, say this, usually followed by, “Being pregnant is so hard. I don’t think I could do it again,” or “We have always wanted to give a home to all those poor babies who don’t have one.”

“It took us a while to get pregnant, too,” another mom volunteered.

“It can take a long time for some couples,” my wife sympathized, assuming she had struggled through years of infertility. “How long did it take you?”

“It took my husband and me a couple of months before we got pregnant.”

My wife simply nodded her head. Then she called my cell phone to see when I was coming to pick her up.

As Laurie spotted me walking into the restaurant, she began putting our son’s shoes on him. I waited for her to introduce me to some of the other moms. When she didn’t, I took the hint and asked, “What do you need me to do?”

“Get me out of here,” she whispered.

My wife cheerfully said goodbye to the group. As we headed toward the door, I couldn’t help overhearing the conversation. The women were discussing how much their children resembled themselves and their husbands.

<
Previous:
"The Girls of Summer"
Next:
>
"Why Did You Buy a Foreign Child?"
Authors
Billy Cuchens