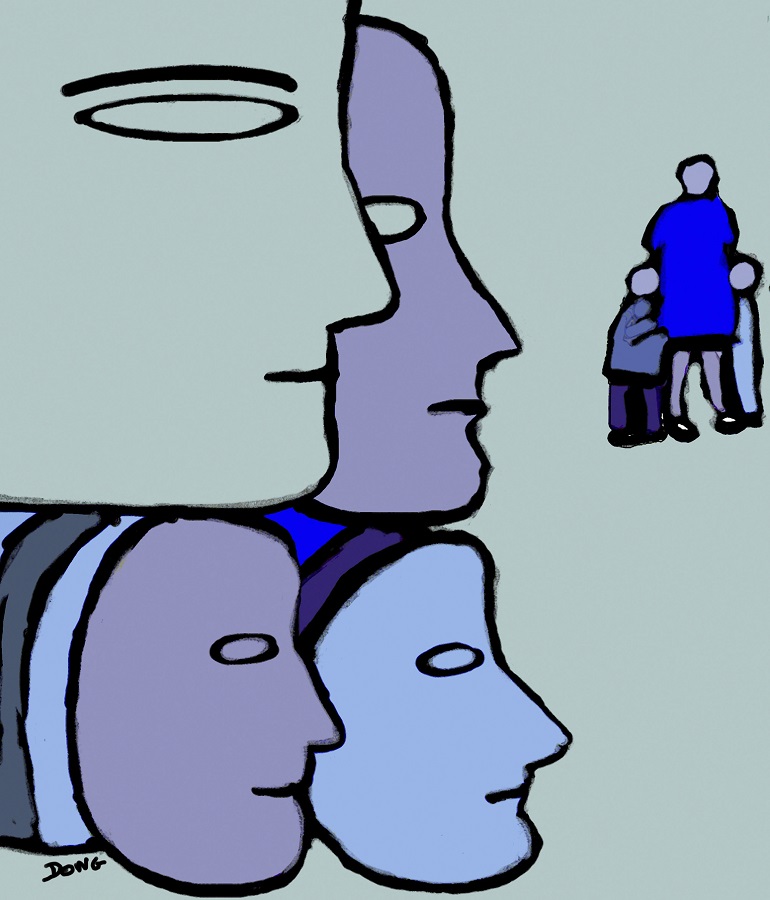 Eleven years ago, I arrived at the funeral of my brother-in-law as both a mourning relative and the sudden legal guardian of his two children. It was the family’s second funeral in a year. Nine months earlier, my sister-in-law, niece, and nephew had died in a tragic accident. People approached me, pressed my hands, and said, “You are so wonderful to take these children.”

It was a noble view of adoption, with me the rescuer, the saver of children. It was tempting to buy into it, and I did at times. But once I got down to the business of raising children, I found that that perspective had little to do with the reality of creating a family.

After the funeral, my husband and I moved into my brother-in-law’s house so we wouldn’t further disrupt the lives of our new 18-month-old son and two-and-a-half-year-old daughter. Those first three months were so stressful, I developed a case of hives that I couldn’t shake. The hives went away, but it took longer to work through the emotional problems. Despite my best efforts at forging a relationship, my daughter gave me the cold shoulder for the first five years she was with us. Her favorite story was Cinderella, and I’m fairly certain I wasn’t the Fairy Godmother.

I have a friend who became a full-time stepmother one weekend when her husband’s ex-wife decided she could no longer care for the children. She raised the kids, monitoring late-night asthma attacks, baking room-mother treats, and sitting through Scout meetings.

“My daughter invited me to the mother’s weekend at college,” she told me one day. “Then she found out her real mother could make it, so she called back to uninvite me.”

I was shocked at her daughter’s heartless treatment of the mother who had always been there for her. My friend and I are No. 2—we will never truly be No. 1 in our kids’ eyes, and that is one of the not-so-nice realities of adoption.

We are quick to point out what we consider our children’s misdirected loyalties, but what of our own? My friend’s preference would have been to have raised a traditional family. Mine was also to have children of my own, which I attempted to do without success for seven years. However much we pretend otherwise, our adopted children were second choices for us.

So there it is. Our children want what they have lost, and so do we. They have lost their blood ties to parents. We have lost our visions of family, the dream of how our lives should be. Still, even though we may not have started in the right place, those of us willing to work through the disillusionment have a chance to grow into a real family unit.

A few months ago my 12-year-old daughter called from her grandmother’s house, where she was visiting for the week. She has a special bond with this grandmother, the mother of the mother she lost. “I miss the dog,” she said, then laughed. “Oh, and I miss you, too.” When I hung up, I was glad for all those years that we moved slowly together, circling each other; afraid to place our vulnerability in each others hands. She did miss me. I could hear it in her voice.

My son is now old enough to understand chromosomes and the steps beyond the mechanics of reproduction. My husband’s blood runs through my son, but mine does not, and he knows it. “There is a ceremony,” I told him, thinking this would appeal to an 11-year-old, “where we can become blood brothers. We can do it if you want.” He considered it and said no, I imagine because of the part involving blood. Now I wonder if it was I who wanted the ceremony, if I was still longing for the solidity of a blood bond.

I feel ridiculous for having suggested this idea, realizing he has no need for such things—that he is, in fact, exactly where he should be. He knows where his family is, the one that is buried and the one that sits at the hockey rink, watching him play. And because he is such a great kid, he is patient with a mother who sometimes makes her mission more complicated than it really is: the offering of family, simple, sweet, and pure.