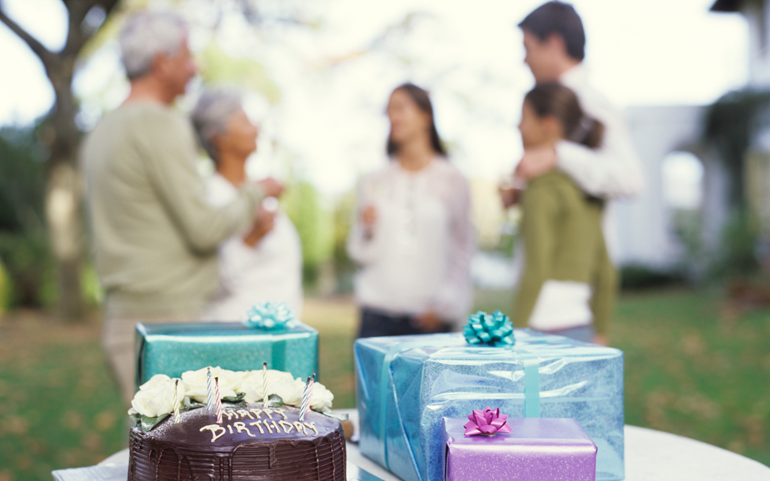 It was a hot day in July when I pulled up to a house I had never been to before. I parked on the street to avoid blocking anyone in. It was a given that I would be here for a while. I saw my parents’ car, so knew they had already arrived. I slid the present into the birthday bag I’d gotten the day before, took a deep breath, and got out of the car.

You’re probably wondering what’s going on at this point. I’m a birth mother. My son was turning two, and his adoptive parents had invited me and my parents to his birthday party. This would be my first time seeing their house and meeting their extended family. And I was nervous. We had had a handful of visits over the previous two years, but they were held at my parents’ house or at a restaurant we both knew and liked. Also, on the previous visits, it had just been us. This was going to be a very different kind of visit.

After seeing me get out of the car, my son’s adoptive father introduced me to my son’s aunt, who immediately gave me a hug and told me how glad she was that I was there. We made our way around the house, down to the fire pit area in the surrounding woods. I looked around and imagined our little boy stomping around in the leaves, mud, and dirt. Three minutes later I saw him doing just that as I was introduced to his grandmother. She also gave me a hug and professed her joy at finally meeting me and her happiness that I was there. I spoke with my parents briefly, but that was only because we were all having conversations while watching the kids play.

I spent most of the party sitting next to my son’s grandmother, talking about life. A few people seemed mystified by my presence, as I wasn’t obviously the mother of any of the other children at the party. My son was, as he still is, a rambunctious boy who will not sit still for anyone. And when they learned who I was, some of these people seemed even more confused—but the look on his grandmother’s face convinced them not to question my presence further.

When you’re a birth mother, it’s hard to know where your place is, especially when it comes to the family of your children. Society has yet to fully accept us. Most of us still believe that we should be ashamed and should hide in our shame, and this is reinforced by the way many people act. But from the very beginning of my journey, I knew I had a place with my son’s parents. This was the first time I met their family, and I was glad to find that I also had a place with them.

One of the most meaningful moments during the party came when I met their pastor’s wife. She asked very politely how I was connected to all of this. My son was walking past and I pointed to him.

“Well, that’s mine,” I replied. I don’t often lay claim to my son. Because she was their pastor’s wife, I knew that she already knew he was adopted. Identifying myself this way was just a form of short-hand to me. She gasped and exclaimed how happy she was that I was being included. Then she said to me quietly, “Not many people know this, although they do [“They” being my son’s adoptive parents], I’m a birth mother. So I understand. And I am so happy that you have gotten this opportunity to be here and to be a part of his life.” She didn’t get that chance. She had given birth in the days when there were only closed adoptions and children were lied to “for their own good.” Although, I have never understood how it was “good.” Children should know where they come from.

The party wore on. My parents went home. The other kids went home. My son’s parents invited me into the house for a while before I drove back to my apartment. We talked. We connected. We watched our son play. After a while, I felt like it was time to go home and let them continue with their usual dinnertime and evening routines.

As we stepped out the door to say goodbye, his adoptive father said, “Whose feet does he have? His feet are huge! He keeps outgrowing all his shoes!” The truth is, the size of his feet could easily be blamed on either my family or my ex-boyfriend’s family. Both sides have big feet. I’m an anomaly within my family, with my tiny feet. I looked down at my son’s bare feet as we stood on the porch and I laughed. Not only are my family’s feet large, we all seem to have weird toes. A couple of us have toes that are almost webbed. Another has second toes that are crooked. I have pinky toes that curl under my fourth toes. Looking down, I saw that my son’s pinky toes did the same. I slipped one of my feet out of my shoe and placed it next to his. His parents looked from my foot to his and then laughed as they saw the same thing I did. So now he has my face, my frown, and my pinky toes, I thought to myself, counting up the physical similarities we share.

I put back on my shoe. We said our goodbyes. My son hugged me. And then I drove back to my apartment.

Like I said, being a birth mother, it’s hard to determine where your place is at times. Over the two years before this, my son’s parents and I had talked, sent e-mails and photos, and planned visits. We had connected in many ways. But now I had been to their house. I had met their family and friends. I had been accepted. My son just turned six, and at the four birthday parties I’ve been to since, I haven’t felt nearly as awkward. I know people there now. They are happy to see me. And they know how I fit into this strange thing we call a family.

<
Previous:
Parent-to-Parent: What Does a Family Want to Hear While Waiting to Adopt?
Next:
>
"Adoption Is Not Second Best"
Authors
Elsa