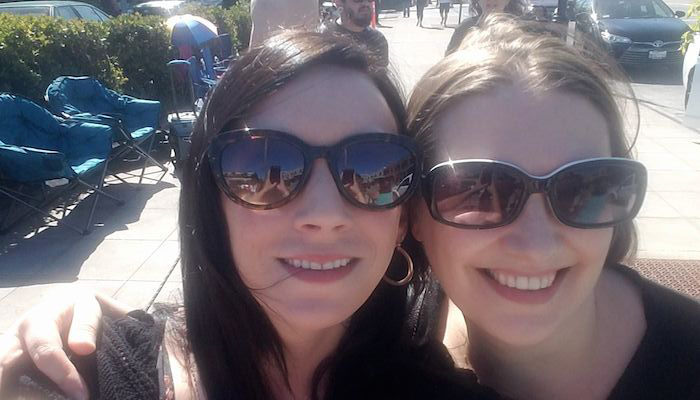 In late summer 2008, my husband, Andrew, and I were in the final stages of the foster-adopt process, when I received a call that sent our lives down a path neither of us had anticipated. The call was from a woman I knew from church. She told me her daughter, Ruth, was pregnant and asked if I could be her birth coach. Ruth’s mother couldn’t help because she was taking care of Ruth’s older daughter, Payton, during an investigation by Child Protective Services (CPS). Thinking that this would be an opportunity to meet a woman in the same situation as my birth mother of my future child, I agreed to help. My husband and I had been planning to adopt an older child, but when I cut Paige’s umbilical cord, I fell in love.

The life of a drug addict is isolated, and Ruth’s was no exception. Her husband was in prison and she didn’t have custody of her older daughter. Ruth didn’t have any friends, and I felt compelled to bring her home from the hospital to recover. During this time, Paige was also taken into CPS custody because she was experiencing drug withdrawal. When I said goodbye to Ruth on her apartment doorstep five days later, I thought that would be the end of it.

Over the next year, Ruth’s husband got out of prison and Payton was returned to their custody. They chose not to reunify with Paige, and Andrew and I were approved to adopt her. We attended all of Paige’s court hearings and witnessed firsthand the pain Ruth went through because of her drug addiction.

After Ruth and her husband signed away their rights at Paige’s last court hearing, I found her outside the courthouse sitting on the curb. She held a cigarette in one hand and wiped away tears with the other. I sat next to her and gave her a hug.

I spoke into her thick hair. “I tell Paige about you all the time.”

“Thank you,” she whispered.

We stood to meet Andrew and Ruth’s husband for lunch. To this day, I’m not sure if we bought them lunch to celebrate the event or compensate them.

In February 2010, CPS removed Payton again, and placed her with us. Payton’s case moved from foster care to adoption after Ruth and her husband were incarcerated for possession of drugs. Ruth was released from jail a week later and her husband was transferred back to prison.

We told Ruth she could be part of the girls’ lives if she sobered up. She began attending a 12-step program. Andrew and I went to her 60-day meeting and gave her the sobriety chip. In early 2011, Ruth relapsed. I wanted to keep in touch with her, but the emotional rollercoaster of caring for an addict was too painful.

Over the next four years, we would get in touch every so often. Sometimes I reached out to check in, and sometimes she sent an email to tell me she wasn’t using. But her sobriety never lasted beyond a few months, and she continued dropping in and out of my life like a ping pong ball.

When August 2015 arrived, we hadn’t been in contact for two and a half years. Paige turned seven. As I’d done every year since she was born, I told Paige her birth story. I thought about the mysterious bond Ruth and I shared and sent her a message on Facebook the following day.

I’ve been thinking about you the last few days and thought I’d say hello. I hope you are doing well.

She responded and, a few days later, we talked on the phone. She told me she had been sober for a year and a half, had a job, and just got her GED.

I shared our challenges with the girls: Paige’s anxiety and Sensory Processing Disorder, and Payton’s ADHD and Reactive Attachment Disorder. I also told her that I had written a memoir about adopting the girls and was trying to get it published.

One month after sending that message, Ruth and I met in person. We both smiled and tears began coursing down her cheeks when our eyes met. We embraced each other.

“I promised myself I wouldn’t cry,” she sniffled when we pulled apart. We both laughed, knowing there hadn’t been a chance of that happening.

We walked for hours, sipping coffee and catching up. It should have felt strange or awkward to be with the birth mother of my daughters, who have challenges because of her addiction.

But it did not.

She had gained weight and looked healthy. The rotted teeth she had the last time I saw her had been replaced by a brilliant, white smile. She was calm when speaking about the good and the challenging things of her past. She was vulnerable in a way I’d never seen before.

I realized it was because she was now being honest about things she couldn’t previously.

At the end of our evening, she thanked me for adopting the girls. “I know I couldn’t give them the life you guys can, and they seem happy and healthy.”

We began meeting for coffee about every other month. I got to know her in a way I hadn’t during the previous seven years. Before, I always wondered if she was acting like her true self or if she was being whomever I needed her to be. A unique friendship began blooming without the shadow of her addiction, and I now think of her as a sister.

Almost a year after Ruth and I reconnected, Andrew and I met with her to discuss steps towards opening up the adoption.  Ruth offered to purchase and take a drug test, if it would make us feel better. “This is my drug test,” Andrew said, pointing to his eye and then at her. “You can fake a drug test. You can’t fake this.”

“I’d love to be in the girls’ lives, but if you don’t think it’s in their best interest…” Ruth looked down at the table and then met our eyes. “I only want what’s best for Paige and Payton.”

Last year, just after Thanksgiving, Paige and Payton sent Ruth a letter. She responded, and their exchanges were frequent. Once the novelty wore off, the girls’ letters decreased to once every few months. Ruth understood this and continued to follow their lead, not wanting them to feel pressured. The following year, the girls and Ruth started speaking occasionally on the phone.

As our adoption journey begins yet another path, I recall an email response from Ruth when I shared concerns about her relapsing:

I know that trust has to be earned… I don’t know if there is anything I can do to make up for any of my past actions and if there is please let me know. But I do not plan to repeat the past and that is something that will only be proven one day at a time….

Since reconnecting, Ruth has proven she’s trustworthy. Our path hasn’t been easy and there will be challenges, but with the foundation of love, anything is possible. I’m excited to see what the future brings for Ruth and my daughters—her daughters—

Lynn K. Sollitto is a writer and the mother of two children in an open foster adoption.

<
Previous:
Parents Share: The "Match Meeting" with an Expectant Mother
Next:
>
8 Keys to Talking About Adoption
Authors
Lynn Sollitto