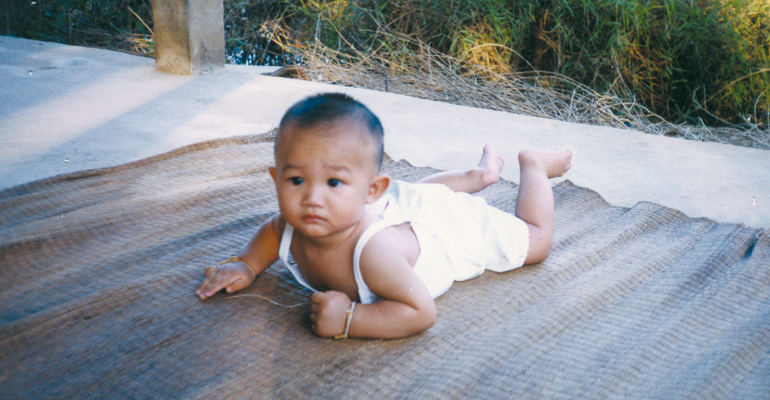 One evening in August, I picked up the phone and heard a familiar voice. “You have a son,” said our social worker. “He’s 14 months old and…” I never heard the rest of the sentence.

We had mailed our dossier only four weeks earlier and were told to expect a one- to three-month wait for our referral.

I settled down enough to finish the conversation, then ran into the bedroom we were redecorating. After hours of hard work, the room was nearly ready to welcome a child of either gender. We’d refinished the wood floors and polished them until they shone, painted the walls sea green and sky blue, and stenciled sea-life figures onto the dresser and bed. I found my husband, Tom, in the closet, paintbrush in hand.

“Oh, just our agency, telling us we’re the parents of a 14-month-old boy.” I tried to sound nonchalant, but ended up choking out the words. He took me into his arms and cried with me. I’d seen my husband cry only once before, when his father had died.

Our adoption agency told us to expect to travel in eight to 10 months. Naturally, we assumed the speedy match with our son meant we’d receive permission to travel sooner.

“I bet he’s home for Easter, at least,” Tom chimed in.

“At the latest, he should be home for his second birthday,” I added, hedging our bets. That would mean waiting until June, almost 10 months. Surely we wouldn’t have to wait that long.

Our agency was absolutely correct in their estimate, despite our high hopes. Nearly 10 months to the day from receiving our referral, we got the go-ahead to travel. It was the longest 10 months of my life.

Motherhood at a Distance

Our well-meaning friends compared the wait to a “normal pregnancy.” “You have the anticipation of the child arriving, getting the room ready, and buying children’s gear,” I often heard.

Yes, I rushed out and bought every adorable little boy outfit I found — sweat suits with tractors on them, slippers, pajamas, hiking boots, and baseball caps — despite warnings to hold off, since children grow quickly and the wait is long (no kidding). And yes, we’d put the finishing touches on Tyler’s sky blue, sea green bedroom.

And yet, the waiting was not the same. My child was already born, already past his first birthday. He had taken his first steps and cut his first teeth. He had spoken his first words, in a language I did not know. And, with each day, he was growing more attached to a foster mother, a mother who was not me.

Six days after the phone call, Tom and I drove the two hours to our adoption agency. I can’t remember the name of the social worker, but I’ll never forget her handing me a short stack of photos. “Your son is beautiful,” she said.

I struggled to focus through a blur of tears, and looked into the most beautiful, serious little face I had ever seen. I saw my son at one month of age, at three, six, nine, and twelve months old. As I thumbed through the stack, he grew before my eyes. I tried to say something, but couldn’t find words to express how I felt. The social worker exclaimed, “Now you’re making me cry!”

On the way home, Tom and I stopped to eat. After we sat down, I propped the five photos against the salt and pepper shakers on our table, so our new family could eat together. Daddy, Mommy, and Tyler. I couldn’t take my eyes off him.

Approximately every three months, until we traveled, we received an updated medical report and photo. With each new picture and report, I would think, “Maybe this will be the last update before we travel.” Then another three months would go by.

In the first update, we saw our son at 14 months old. The photo was taken on August 21 — the day we were notified of his existence. He’s smiling in that photo. Was it because he knew we were out there somewhere, getting ready to come get him?

A few months later we saw our son at 18 months of age, standing alone in the middle of a dirt road, wearing mismatched clothing. In the photo, his expression looks worried. Maybe he was wondering when we’d come, I thought.

Throughout our months of waiting, Tom and I wrote letters to our son. We told him about our jobs, our hobbies. We described the bedroom that was waiting for him, the sea life decorations and the colors we’d painted the walls. We told him about our town and the people who lived in it. We sent him coloring books and crayons, picture books, stuffed animals, and a small photo album, so our faces would become familiar to him.

In the last photo we received, just weeks before we flew to Thailand, our son was 21 months old. He was sitting on the floor, holding a picture book we had sent to him. Other gifts, a stuffed animal and construction paper, lay on the floor in front of him. He was touching things we had touched. We were amazed to see evidence of our connection. It made everything seem real — and it made me even more anxious to bring this little boy home.

Our hoped-for milestones passed by. Christmas came and went. Easter was celebrated, with still no word of a travel date. Just as I began to get discouraged, the call finally came in late spring. No, our son would not be home for his second birthday, but we were to travel shortly after, at the end of June. The day we would fly home was my mother’s birthday. When I called her with the news, she exclaimed, “That will be the best birthday gift ever!” For Tom and me, it would be the gift of a lifetime.