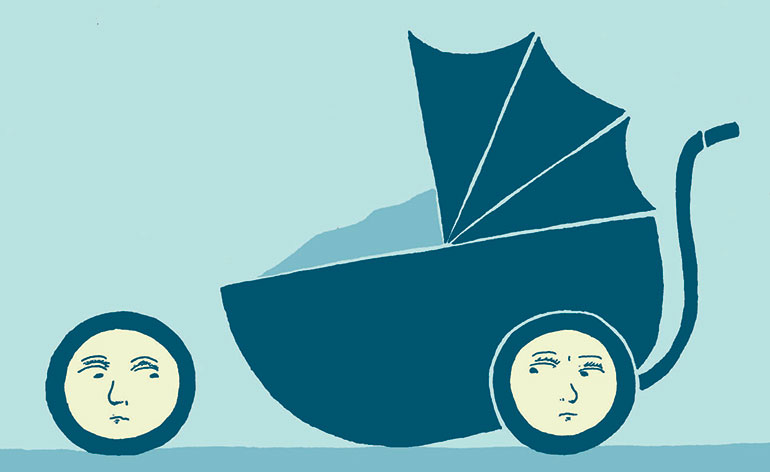 It’s often played for laughs in TV shows and movies — the nervous husband who jokingly asks if there is a money-back guarantee if he is unhappy with the adoption. But when prospective parents — or their closest family members — do not agree on the decision to adopt a child, it is no laughing matter.

“It is common for people to be in different places about adoption, yet it is something we do not often talk about,” says Jill Smolowe, an adoptive parent and author of an adoption memoir, An Empty Lap (Pocket Books). “That makes the person suffering through it feel alone. I thought my marriage was flawed in some fundamental way when my husband and I couldn’t agree, and yet I struggled in isolation.”

Even if your mate — or your mom — is against your decision to adopt, it doesn’t mean that your relationship is unhealthy, or that you won’t eventually find common ground. Here’s how you can help naysayers feel better about heading down this road with you.

You wanted your baby home yesterday — but your mate is dragging his feet and raising new concerns daily about taking this path toward parenthood. While such an imbalance is frustrating, it’s also incredibly common for one half of a couple to lead the charge toward parenthood.

Reluctance to become a parent often centers around what must be given up, or anxiety about meeting expectations. Ask yourself and your spouse these hard questions, knowing that some may be unanswerable until you’re living with the changes a child brings.

“Couples are rarely at the same point at the same time in approaching major life events,” says Ronny Diamond, director of the adoption counseling team at Spence-Chapin in New York City. “One will be ready to get married, buy a house, have children, before the other will. This isn’t necessarily reluctance, it’s just an indication that you’re out of sync in your timing.”

Complicating this particular decision is the fact that adoption, in many cases, symbolizes giving up on a dream. “People usually come to adoption because they can’t have a child biologically, or because they have not yet found a partner. They bring these feelings with them,” says Joni Mantell, director of the Infertility & Adoption Counseling Center in Pennington, New Jersey. “Adoption is not the way they expected to form a family.”

Before you try a hard sell, consider backing off and giving your mate time to come around on his own. He may surprise you. “My husband was reluctant to adopt after our infertility treatments,” says Stacey Snakenberg of Olathe, Kansas. “He worried that adopted children turn out bad. I insisted that he attend one informational meeting with me. When he still seemed hesitant, I let it drop. One day, out of the blue, he asked if I was ready to pursue adoption. After meeting a couple who had just returned from China with their 15-month-old daughter, he was sold.”

For others, talking it out is the way to get both partners in step. This conversation may be fraught with emotion — especially if one partner feels blame for the need to be on this path in the first place. “A couple can have difficulty communicating about family building, because the stakes are so high,” says Smolowe. “I’m talking about bone marrow-deep differences that, as happened in my case, can put a marriage on the line. Differences so fundamental that some marriages bust up as a result.”

The key is to acknowledge the reluctant spouses concerns and fears, and take them seriously. “If one partner has gone to informational meetings and done some research, she’s going to be more comfortable with the idea of adoption,” says Diamond. “Her spouse’s concerns are legitimate, and he may need to cover some of the same ground before he gets on board.” Join a support group for couples considering adoption. Hearing other’s reservations may help both of you consider different angles and explore what’s fueling the reluctance.

Smolowe and her husband chose counseling to deal with his reluctance to adopt, which she strongly recommends. “A therapist doesn’t take sides, so concerns may be addressed without the pressure of expecting a particular outcome.” If therapy isn’t an option, you could ask your adoption agency to put you in touch with other adoptive parents who faced this challenge. A phone conversation with a formerly reluctant spouse (who is now a proud parent) could be incredibly reassuring.

When you announce that your family will be growing, you expect family members and friends to rejoice. But adoptive parents are sometimes shocked by unenthusiastic reactions to their big news.

“It was not that they were reluctant, just apprehensive,” says Charity Hale, an adoptive mom in North Port, Florida. “My parents had simply never considered adoption as a way to build a family. They had questions, concerns, and fears that they had to deal with before they could be excited. It took them around six months to get on board.”

It may hurt to have loved ones question your decision, but keep in mind that they probably have the best intentions. “For the most part, a relatives concern is rooted in love and care for you, and it’s important to take it that way,” says Diamond. But you should also prepare to be firm. “You can tell them that you appreciate their concern for you. Say that you’re open to answering questions that they may have, but that you’ve made your decision. Now you need their support.”

To ease their minds, share some of the research you’ve done to prepare yourself for adoption: A little education can go a long way. Give them books about adoption, such as Patricia Irwin Johnston’s Adoption Is a Family Affair! What Relatives and Friends Must Know. Connect them with programs and workshops at a local agency, or find online support groups to teach them more about adoption.

If you’re adopting transracially, you may have extra educating to do. “We all have beliefs about people, and some of our beliefs lie in stereotypes,” says Diamond. If your relatives seem uncomfortable about your child’s ethnic heritage, or express prejudices, speak up now. “Tell your relatives that it’s a good time to examine their assumptions, as you have yours,” Diamond recommends. “If they resist your request for an honest discussion, say that you know they want to be the best uncle or aunt they can be.” Be aware of subtle stereotyping, as well as outright racism, advises Diamond. “Don’t let it slide if someone says, ‘That’s great that your daughter will be Asian — they’re all so good at math!’ You might respond by saying, ‘Each of our children will be an individual, and we hope that you’ll treat each one as such.'”

Even if family members don’t support the adoption decision during the wait, most parents find that their loved ones come around when their child finally comes home. “I wouldn’t make too much of their negative reactions until they finally meet your child,” recommends Mantell. “Once someone meets her new grandchild (or niece or nephew), fears and reluctance often melt away.”

Robyn Chittister, of Antioch, California, was pleased to discover that her biggest critics became her biggest cheerleaders when their son finally came home. “[My husband’s parents] had said that they weren’t sure that they would love an adopted grandchild as they might have loved a biological grandchild,” she remembers. “Any worries I had were dispelled when they met Jack. I had never seen my mother-in-law cry until her first visit with Jack came to an end. And my father-in-law, who used to seem afraid of babies, holds him and plays with him with such love. As soon as they met Jack, and saw that we’re a family, they just got it.”

<
Previous:
"A Complicated Privilege"
Next:
>
"Teaching My Children That Black Is Beautiful"
Authors
Lisa Milbrand