Q: We just turned in the last of our paperwork to the adoption agency and are officially in the pool of parents waiting to adopt. I’ve been so excited I can barely keep it in, and have started telling people. I wasn’t expecting the reactions I’ve gotten, though, and that’s made me hesitant to tell others. Today I told a woman who is expecting a baby in three months.She was super excited for us, but then asked, “So, do you plan to have children in the future?” What??! I just told you we were! When I told someone last week and mentioned that we hope for an open adoption, her response was, “Oh, Honey. That’s too hard. You don’t want to do that.” How many people did you tell? Did you face the same kinds of comments, and how did you deal with them?

“I have been telling everyone, and have had to educate many. A few haven’t responded so well to my correcting them or explaining. I have heard, ‘I didn’t mean it like that.’ I understand that many people do not understand adoption and believe it is still the way it was back in the day (closed adoptions). In fact, I had a lot of those beliefs until we started this process. My feeling is that it’s worth educating as many people as I can, because they will eventually be involved in my baby’s life—and if they are not willing to listen then, guess what, they may not be as involved in Baby’s life as they expect. Most people are excited and want to learn about it, though!”

“Every adoptive parent automatically becomes an expert on adoption—at least, that’s what non-adopters seem to think. I was fortunate that I only got a couple of stupid comments, but most of my family and friends knew I was going to adopt. (I’d always wanted to adopt as opposed to having biological kids.) I suggest telling anyone you would tell if you were pregnant. Just be prepared for the comments, and try to be nicer to them than they are to you.”

“Just last week my own dad tried to lecture me, saying, ‘Adopting won’t make you fertile.’ Wow, way to be supportive, Pop! Aside from rude and stupid, you may even get mean comments. But I still think it helps to prepare your immediate friends and family with the news and basic information. There will always be a few who hold inaccurate beliefs. I’d rather educate these people before our new baby arrives.”

“I am amazed by some of the reactions we have gotten, both good and bad. We definitely had to do some educating. I think it has been a little harder on my husband than on me, as he is a much more private person than I am, and often doesn’t know how respond to other people’s bizarre comments. I used to really be bothered by the comments, but I think I’m getting better and I actually find some of them funny now. Even my OB/GYN made the infamous, ‘Oh, now that you are adopting you’ll get pregnant‘ comment last week during my annual! Geez. I didn’t know that was part of their practice—fertility by adoption! I just laughed right along with her and told myself she was being sarcastic.”

“Don’t let others’ ignorance about the subject of adoption, especially open adoption, sour you on sharing your wonderful news. Stay positive in your process and do take the time to educate those who clearly do not understand how far adoption has come over the last 50 years. Keep it light and have a sense of humor about the stupid comments people make. Seriously, I used to spend a lot of time during my long commute to think up snappy come backs for these people (but I only got to use a few). I ‘managed’ the info to my family. For example, I only told my parents after we’d been matched because I knew they were the most conservative and the most afraid for me. That said, my own sister. who has four biological children, said, ‘Ya know, you should probably just get a dog.’ I was horrified and hurt beyond belief! At which point I decided to focus my excitement toward people who were doing the same thing I was—strangers who were also adopting.”

“There is so much misinformation in the general media, and especially on popular dramatic ‘women’s’ channels, that people don’t know what to think. Even my friends and family who were supportive of our adoption plans were so worried for us, and very much afraid we would spend a million dollars and come home with no baby. All their fears were in the extreme. We did gently educate those people we care about, and. when time permits, we inform people in our circle or community who have wrong ideas. Now that we have our baby home, our close family still worries about the ‘open’ aspect. We’ve had to be very firm with several people who will be in our son’s life, to ensure they know to speak respectfully, graciously, and lovingly about our son’s birth mother. In the end, this process had turned out to be a way of opening peoples’ hearts and minds to adoption and first parents in need. I’m grateful for the opportunity to share our experience when it comes up!”

<
Previous:
Ask AF: How to Explain to My Child That His Birth Mother Was Addicted to Drugs?
Next:
>
Parents Share: Celebrating with an Adoption Shower 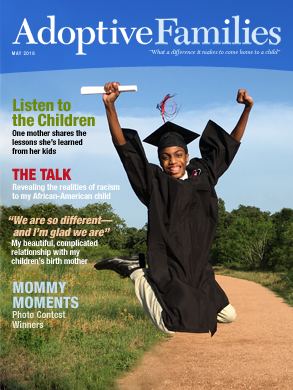 "Marcus began his senior year of high school just four days after we moved to Texas from another state. Not an easy task, but he handled it like a trooper! This photo was taken days before his graduation, and days after he turned 18. We went to a local park to take some photos and this one stood out for many reasons: The joy and pride in his face, the arms thrust in the air...just a cool shot. Marcus and I have joked that it looks Photoshopped, but it is not. Just a picture taken on my phone!" —JILL