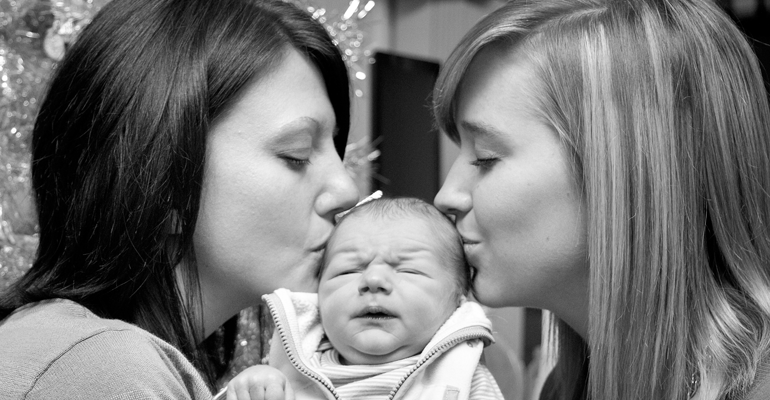 Not long before I took my seven-year-old daughter, Bekah, to Colorado to visit her birth mother, I read one of those studies about twins who were separated at birth. One mother complained that her child wouldn’t eat anything that didn’t have cinnamon on it. When the researchers interviewed the woman who had raised the other twin, however, she said the girl was a fine eater. As long as I sprinkle a little cinnamon on her food, the second mother bragged, she’ll eat anything.

There are bonds, I realized, that are beyond our understanding. It’s a thought that was to cross my mind more than once when Bekah and I were in Colorado.

Bekah’s birth mother, Suzanne, and I write to each other once a year around Bekah’s birthday, trading photos and news, and Suzanne always sends her a present. One gift, a plate with a hand-painted picture of a girl, became a particular treasure. At first, Bekah kept it in her room, then in the kitchen, and then on the dining-room table. She was searching, it seemed, for somewhere special, but could never find quite the right place.

Although Bekah hadn’t seen her birth mother since she was an infant, she always cried and spoke of missing Suzanne after receiving a present. I had always assumed that Bekah would visit her birth mother when she was a teenager or a young adult. But one summer morning I awoke, turned to my husband, and said, “I want to take Bekah to see Suzanne.” I was thinking of a close friend who was dying of cancer, leaving behind a four-year-old. I must take Bekah to see Suzanne now, I thought, before anyone else is dead.

I called Suzanne in Colorado Springs, and we had an awkward conversation. She wasn’t sure she wanted us to visit. Because Bekah is deaf and primarily uses sign language, Suzanne was worried about how they would communicate. And she was scared that Bekah would ask her the hard question: Why did you give me up? I tried to reassure her. Bekah is used to being with people who don’t sign, I explained, and I would be there to interpret. If they wanted some private time, they could write notes. As for the second worry, I didn’t think that question was on Bekah’s mind. She tells her adoption story differently each time, but it always includes the part about Suzanne not being ready to have a family, how brave and generous Suzanne was, and how grateful and lucky we were.

Trying not to pressure Suzanne, I made up a story about having to go to a conference in Denver. If she would like us to visit, I would bring Bekah with me. The next day, she called back and said yes.

Bekah and I spent Friday night in Denver and drove to Colorado Springs early Saturday morning. During the hour-long drive, Bekah, who usually doesn’t stop talking and signing, sat silently with a coloring book in her lap. And then finally, Bekah stood face-to-face with her birth mother. “You are so beautiful,” Suzanne whispered. She and Bekah hugged, then Suzanne and I hugged, and then in our nervous excitement, Bekah and I hugged. Suzanne gave Bekah a gift that she said was from Rachelle, her two-year-old: a stuffed Pooh bear, exactly like the one Rachelle sleeps with each night, but one size larger.

The day before, Bekah had gone shopping with her father to buy Rachelle a gift, and had decided on a soft yellow panda bear exactly like the one Bekah sleeps with, but one size smaller. I tried to pretend that I believed it was only a coincidence. But I believed nothing of the sort. I believed that Suzanne and Bekah were like the twins who wanted cinnamon on everything.

Bekah was delighted to teach Suzanne some signed words. But their private conversation happened on paper. Suzanne wrote, “Is there anything you want to ask me?”

“Anything is OK,” she answered bravely.

The next day, I was standing in Suzanne’s living room looking at the photos of Bekah on the mantle while the girls changed for the pool. When Bekah came out of the bedroom carrying her sister, I gasped. Rachelle’s bathing suit was the toddler version of the jungle-print suit that Bekah had insisted on buying.“It’s the same material!” I signed hysterically to Bekah, who happily signed back, “Sisters!”

Later, Suzanne and I talked while the girls played, and I wondered about our own connection — not quite friends, not quite family. There is no word for what we are to each other, I thought, as we spoke intimately about our pasts, our children, our relationships. We all cried when we said good-bye Sunday afternoon, but it wasn’t until Bekah got in the car and we pulled away that she began to wail — a guttural cry of pure grief. I pulled over to hold her, but she asked me to keep driving.

Back at the hotel, I sat with my journal, trying to collect my thoughts. I wrote about the stuffed animals and the bathing suits, of course, though I knew the trip had been successful not because of the things that seemed extraordinary but because of the things that seemed ordinary. Suzanne was a person now, not a fairy godmother. Bekah had gone for a swim and had eaten ice-cream with her. She had seen Suzanne’s home and her daughter. “I’m so grateful,” I wrote, “that I had the courage to come here.”

The next morning, Bekah and I met a deaf couple in the breakfast buffet line. After she finished eating, Bekah went over to their table to visit. They had been married the day before, the woman told Bekah.“Do you know that at Paul and Sharon’s wedding,” Bekah said as we headed to our car, “nobody signed but them?”

“Yep,” Bekah nodded. “Paul said he and Sharon didn’t really understand the service, but he thinks they’re married.” Bekah laughed at Paul’s joke and slipped her hand into mine. She signed with the other, “They said I’m lucky you’re my mother.” I held her to me, resting my cheek on the top of her head.“Not only because you sign,” Bekah told me.

Bekah shrugged. “Maybe another mom wouldn’t bring me here, or…let me spend eight dollars on toys for the airplane.”

On the birthdays since our visit to Colorado, Bekah is always happy to receive Suzanne’s gifts and cards; she doesn’t cry about missing her anymore. She puts the photographs into her scrapbook and places the gifts on a special shelf in her room with the hand-painted plate. Everything, it seems, is in the right place.

<
Previous:
When Your Child Has Birth Siblings
Next:
>
"Hand-Me-Downs: Growing Up in Foster Care"
Authors
Wendy Lichtman