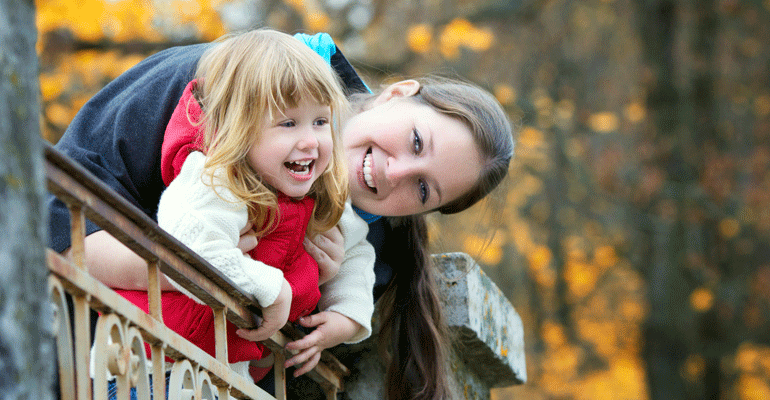 Catherine Brunson clearly remembers the day she learned she was adopted. “Someone approached my brother in school and said, ‘Oh, you’re the adopted kid,'” says Brunson, a 37-year-old graphic designer in Charlotte, NC, who is the oldest of three adopted siblings. “My brother came home and asked my mom.”

“My mom took both of us by the hand and proceeded to take us in the bedroom and tell us the facts of life,” she says. “While we stood there, she went through the whole thing — the birth process, etc. Then she segued into how this happened to someone else, not to her and Dad.”

“We were looking at each other going, ‘Wow.'”

Misguided? Comical? Potentially harmful? Perhaps, by today’s standards. Effective? Definitely, according to Brunson, who says the incident was key to helping her develop a matter-of-fact attitude about her adoption.

“It never bothered us, and we never were concerned about it,” she says. “From that moment on, it [adoption] was extremely open in our family.”

Just like Brunson’s mother 30 years ago, today’s adoptive parents face a big challenge: helping your children achieve a level of comfort and confidence with their adoption. And the most effective way to accomplish that is by talking about adoption to your children.

“I think children can’t move forward into the future unless they have a grasp of what happened in the past,” says Jane Brown, MSW, an adoption educator, consultant and author in Scottsdale, Arizona. “Children have a great many feelings about having been adopted that they gradually develop. Talking with them enables them to get those feelings out on the table where they can cope.”

If talking were all about cozy chats by the fireside, it’d be a snap. But many times, it involves fielding a question while you’re driving the kids to soccer practice, fending off a stranger’s comment or deciphering your child’s angry outbursts.

Fortunately, techniques developed by adoption experts can make talking a little easier and a lot more effective — whether it’s a warm heart-to-heart conversation or a spur-of-the-moment surprise.

1. Begin talking when your child is young.Early talks — starting in infancy — help your child learn adoption language and begin to grasp his/her adoption story. But early talks may actually be more for your benefit than for your child’s.

“Our general philosophy is tell them early and tell them often,” says Tom Swanson, a North Carolina dad of four grown children, two adopted domestically and two adopted in Korea. His wife, Linda, adds, “Part of it was to get us used to using the words, before they really even knew what we were talking about.”

Before you start, practice the story in your mind, or even role-play your response to questions your child might ask.

It’s important for partners in a two-parent family to coordinate their stories, according to Debbie Riley, MFT, executive director of the Center for Adoption Support and Education (CASE) in Silver Spring, MD. “They both have to be committed to talking, on how to share the story,” she says. “It takes a lot of the stress out.”

2. Keep your conversations developmentally appropriate.For example, Susan Fisher, MD, a clinical professor in the Department of Psychiatry and member of the Committee on Human Development at the University of Chicago, and co-author Mary Watkins found a common thread when they interviewed parents and children for their book, Talking With Young Children About Adoption.

“Most of the conversations started when the kids would say, ‘Was I in your tummy?'” Fisher says. That’s a common developmental question that usually appears at age three and a half or four. When you answer, you need to use a storytelling technique and language that can be grasped by a four-year-old.

“Developmentally appropriate” conversations require you to think carefully about how to discuss difficult issues without lying. “For example, if you know your child was conceived by rape, you don’t want to start out by saying your mommy and daddy loved each other very much,” says Lois Melina, author of Making Sense of Adoption and Raising Adopted Children. “You can say something that would imply that their parents didn’t know each other very well.”

3. Be honest.The adoption story belongs to the child, and the child has a right to know that story. “There’s no doubt in my mind that that is the best way to go for any child,” Brunson says.

“Developmentally appropriate” storytelling doesn’t give you license to replace missing facts or soften harsh ones. “As adoptive parents, we want to make it all better,” Riley says. “We want to take away the loss and the pain for a child.”

But we can’t, she says. “What might fly at six may not fly at 13. That’s why you have to be very careful about what you say. Don’t make it up; just admit you don’t know.”

4. Talk often, and show that you’re willing to talk when your child wants to.Repetition helps a child absorb the concepts surrounding adoption. “We’re asking children to try to understand complexities about their adoption stories that sometimes adults can’t understand,” Riley says. “Sometimes the information is too emotionally laden for the child. Developmentally, he might not have been able to process it. So it’s important for the parent to revisit the information frequently.”

Make sure the conversations are relevant. “Talk about it when it seems to be a significant piece of whatever’s going on,” Melina says. “At some times in a child’s life, that’s going to be frequent and sometimes it’s going to be infrequent.”

5. If your child isn’t talking, consider using techniques to spark conversation.An indirect conversation allows parents to keep the subject open without forcing the child to participate. “It’s directly meant for the child to hear, but it’s not talking to the child,” says Joyce Maguire Pavao, Ed.D., founder of the Center for Family Connections in Cambridge, MA, and author of The Family of Adoption.

For example, she says, a dad — knowing his child is nearby — might ask his wife, “I always think of Lisa on Mother’s Day because she’s Sally’s birth mother. Should we buy flowers for Lisa and put them on the mantel, or send her a card?”

Another idea: Make a small comment about a topic and then see if the child responds. (Adoption expert Holly van Gulden calls these “pebbles.”) For example, Brown says, a stranger’s nosy questions could prompt you to say later, “I felt so awkward when that woman asked me about our family.” Wait to see what, if anything, your child says and use that response to set the course of conversation.

Sometimes a direct approach works best. “Occasionally we’d say, ‘Do you have any questions about adoption?'” Linda Swanson says. Sometimes the children would ask a question, she reports; other times, they wouldn’t.

6. Help children learn to express their feelings.“Help them develop a feeling-word vocabulary,” Brown says. “That starts with toddlers. Help them have an extensive vocabulary so they can identify feelings that get jumbled up and get them out in words.”

Look for nonverbal ways to help your child work through adoption issues. Some children might benefit from drawing pictures about their adoption story, Riley says. Older children can write in a journal, Melina suggests. “That’s a pretty good way to work out a lot of grief and process abstract thoughts.” Of course, the journal is the child’s property — no snooping.

7. Make certain children who are older when placed — especially international adoptees — receive the explanations and support they need. If language is a barrier, Pavao says, talk with the child through a reliable translator. Start the process in-country and continue it at home, hiring an interpreter if necessary.

She also encourages families to hold adoption ceremonies that help children understand what’s staying the same and what’s changing. “I think ceremonies are very important,” Pavao says. “And when children are older, involving them is extremely important.”

Don’t try to make your child forget her past. “Often, parents think that was a hard life; we’ll bring the child here and make everything better,” Riley says. “But you have to realize, nine years of one’s life is nine years. The child should remember everything, good and bad. If we don’t talk about it, everything gets confused and overwhelming for the child.”

8. Learn how to respond appropriately to others’ questions and comments and teach your children the same skill. “If somebody walked up to you in the grocery store and asked how much money you make or how often you have sex, you know where the boundaries are,” Melina says. “It’s important for parents to recognize that they can be honest and open with their children about their histories but that doesn’t mean they have to be honest and open with everybody they meet in the grocery store.”

That can be difficult to do when it comes to adoption. “We’re so overjoyed to have our child with us and so proud of our accomplishment of having gotten them home that we’re eager to talk to people,” Brown says. “We radiate that. But we allow the focus to stay there when we shouldn’t. We do that at our child’s expense.”

Pavao suggests practicing a response that goes something like this: “We love to talk about our personal matters in our family, but we don’t talk to strangers about that.” Then redirect the conversation or simply say goodbye in a pleasant manner.

Once you’re back in the car, give your child an opportunity to talk about the incident if he/she wants to. Seize the teachable moment, too: “Remember, we don’t talk to strangers about personal matters.”

She recommends treating birth parents as extended family members who must be “on board” with the whole adoption agenda. Make certain the birth family is aware of your approach to the adoption story and will work with you as the child asks questions.

Now that you’ve learned those rules, here are the two most important ones:

Every child is different.

“If you have four adopted children,” Pavao says, “you’re going to deal with each of them differently. To take any list of steps and think you’re going to have a template, that’s not going to work.” What’s more, you shouldn’t force the topic on any child. “I see kids in therapy who tell me they don’t have a minute when their parents aren’t reminding them that they’re adopted,” Pavao says.

So how do you know what’s the best approach for your child? Simple: You’re the parent. “Parents know their kids,” Pavao says. “I constantly remind them that they’re the experts on their child.” Listen to your children, Fisher says, and give them what they need, not what you need. A tall order, perhaps, but it’s the essence of parenting — adoptive or otherwise.

<
Previous:
Why You Need Your Child's Medical History
Next:
>
When the Door Closes on Open Adoption: a Birth Grandmother is counseled to Take the Long View
Authors
Barbara Russell