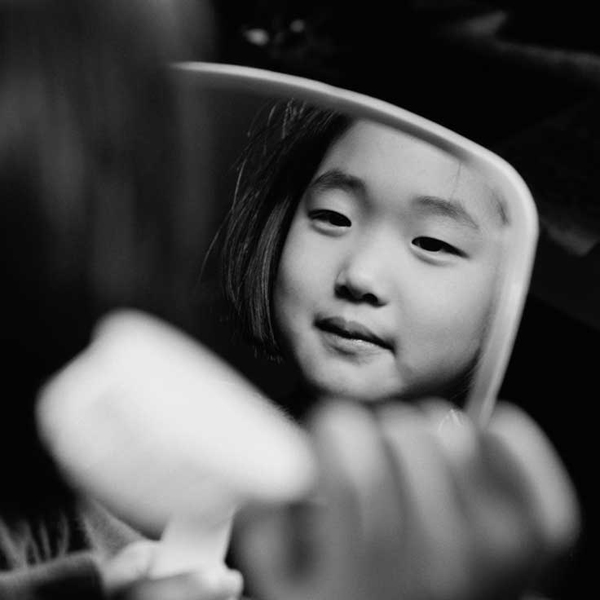 Footsteps thump softly on the stairs, then my daughter prances through the doorway. “Ma, didn’t you hear me? How do I look?” She leans hard into the mirror’s reflection. “My cheeks, chin, and eyes are round. Are my nostrils too wide?”

At first I am quiet, trying to get the lay of the land. I exchange a look with my husband. In the past we could always make her giggle and admit that deep down she recognized her own gorgeousness. But lately she’s been unable to go 10 minutes without checking herself in the mirror. Compliments collapse around her like a candle melting in on itself.

I know better than to blow this out of proportion. She’s a 14-year-old girl discovering herself, asking: Who am I? What am I becoming? How am I different from others? This sort of self-absorption is necessary for developing self-awareness.

Still, I am beginning to wonder if there isn’t more behind all this. Is it simply a phase, or does our daughter view our family’s differences in physical appearance as a lost biological connection?

Our family’s pool of adoptive genes and birth genes means that one of our kids wears a chin like her father’s and has tiny deep-set eyes like mine. Our two other children were transracially adopted. Their lack of a genetic tie to our family was clearly magnified by growing up with a sibling who was biologically related to us. Sometimes this was in the forefront; more often it rested beneath other issues.

The arrival of adolescence brings role changes, identity struggles, and new expectations. It’s a time of excruciating self-examination. Issues of race, ethnicity, and heritage burst to the forefront as our children sort out the pieces.

Teens with losses often have more difficulty during life stage transitions, in part because change — puberty included — often triggers old insecurities from previous losses. Old issues will likely re-emerge and need to be reprocessed during adolescence.

We don’t parent in a vacuum. The way we view ourselves, along with the relationships we have with our spouses and our other children, affects the way our kids view themselves. Studies reveal that parents who have resolved issues like infertility and parenting another person’s biological child are far more likely to raise teenagers who are comfortable with adoption. And women who have no appearance hang-ups are far more likely to raise daughters who will grow up feeling beautiful.

I know confident adults enjoy a bit of primping, and those who care about how they look teach us about taste and style. Caring for ourselves makes us feel good emotionally, so why was I worried?

I began to pay attention to how I responded to my daughter, to see which “buttons” she was pushing when she talked about her looks. Deep down, did I recognize my own gorgeousness? Shifting my focus to the positive increased the bond between us.

My daughter’s ritual of appraising her face turned out to be less about meeting beauty standards and more an awakening of self and a wondering about who she would grow up to be.

Appearance and racial differences within our family, as I suspected, were reminders of lost biological connections. And while biology cannot be changed, it can be understood and accepted. My daughter’s moments of doubt offered an excellent opportunity for us to discuss the past, think about what might have been, and to correct any misperceptions.

<
Previous:
The Dream of a Family
Next:
>
"A Gift in the Mail"
Authors
Terra Trevor