It was 3:00 a.m. and I was wide awake inside our Bangkok hotel room. My heart pounded, desperately seeking an escape route from my heaving chest. I didn’t know it then, but it was already gone, stolen earlier that day by the little boy who would be my son.

I had been dreaming of the stunning 13-month-old boy we had met earlier that day. After nearly two years of wishing and waiting, he was no stranger in our minds. It was as though Brian and I had conjured him from our longing. Our ache, once called infertility, had a new name—Bodhi, a word that meant “awake.” We had seen his baby pictures and sent over family albums with names and titles: Mommy, Daddy, Uncles and a sort of Aunt, Grandma and Grandpa (two full sets!). We sent letters, gifts, and recordings of our voices singing songs with his name. We painted his room and filled it with fuzzy bears and blankets and our favorite children’s books: Goodnight Moon and The Giving Tree and Love You Forever. We meant it. Yet now, as imagination and reality collided inside our air-conditioned room on the 21st floor, I was consumed with anxiety.

We met Bodhi in a small, cold banquet room tucked inside a corner of the Amari Boulevard Hotel. It was the kind of sterile place usually reserved for board meetings or staff parties, but on this day, it was a temple. Bodhi was brought in by his social worker, clinging to her side like a koala, and I gasped. Our little boy—no longer just a dream, but dreamy still—wore a blue baseball hat, shoes far too big for his feet, and a terrified expression. Chocolate brown eyes overflowed with tears, spilling over the amulet around his neck, down his shirt, and onto the floor.

The social worker held him even closer. “Mai pen lai,” she said, which means “It’s OK,” in Thai. But how did she know? This tiny boy was about to be uprooted again, first from his birth mother and now from his beloved foster family. And in the days to come he would be taken from his country of birth to a home on the other side of the world where everything looked and felt and tasted and sounded different. All of this in little more than a year. Aside from a few phrases, like kin khao (eat rice) and mum mum (hungry), he had no words to express himself. It didn’t matter that I was 36 years older than he—I had none either. We stared at each other and cried. Some prayers answered, others only heard.

Can I Love Him Enough?

A single red balloon. A mountain of French fries. A pilly, blue blanket. A loving foster family. A funny, soulful father-to-be. After a downpour of tears came the rainbow. On that first day, we discovered so many things that made our boy’s face light up.

But each time I reached for Bodhi, he would bolt away in tears. Brian and I had learned that it’s common for a newly adopted child to bond with one parent before the other, but we had both assumed our boy would instantly connect with the mama bear. It wasn’t even a question. But Bodhi attached to Daddy immediately and fiercely, physically and emotionally. He pressed his whole little body against Brian and wouldn’t let his new father out of his sight. Watching them together should have been a joy, and I felt blindsided by just how much it hurt. As Bodhi’s radiance shined on everyone but me, I began building up walls. What was happening was visceral and beyond reason. Stop, I kept saying to myself. Stop. But I couldn’t.

I decided I was unworthy of this little boy’s affection, and began to question my ability to love him enough, let alone in the manner to which he was accustomed. After meeting Bodhi and visiting with his foster family, Brian and I had joined my parents for dinner in a touristy high-rise above downtown Bangkok. They had flown in from Los Angeles and were anxiously awaiting details about our day with their first grandson. Brian talked, I just nodded and smiled, hoping the lump in my throat wasn’t visible from the outside. When the check finally came, so did my involuntary crying jag. At the elevator, my dad said quietly, “You know, you don’t have to go through with this.”

Back in the hotel, my father’s words boomeranged through my brain. I had longed for sandbox days, sleepless nights and the delirious, soul satisfying joy of raising a child. But in that moment, I wrestled with sheets and my shortcomings. I’m a mediocre daughter, a hyper-independent wife, a moody introvert, and a known plant killer. Not exactly a parental pedigree. Even so, Brian and I knew we wanted a family. Thailand? Yes, Thailand. The culture called to us both. I filled out the paperwork, got fingerprinted, blood-tested, and vetted by multiple government agencies. All of this makes me an excellent rule follower, but a mother? Still, the United States government in cooperation with the Royal Thai Consulate agreed to let us adopt. In the dark of our hotel room, here’s all I could come up with: Brian’s goodness tipped the scales in our favor, allowing safe passage from couplehood into the parent ’hood. I had nothing to do with it at all.

Doubt is a mother.

But, my boy. Underneath all my fear and self-loathing, when I saw him, I knew he was mine. His heart and my own cracked open simultaneously, just enough to let the light in. After meeting at the hotel, Brian and I had joined him at his foster family’s house: A home with a dirt floor and generations that rolled three deep. There was so much love within those walls, so much laughter and tears over my boy’s imminent departure. He was the first of nine foster children to go beyond Thailand’s borders. Why us, and why now? When is a random chance actually destiny, and when are those interchangeable? Brian and I could give Bodhi a “better life” in many ways, but I wondered, could we ever match the foster’s in unconditional, immeasurable, jump-in-front-of-a-train-for-you love?

On the Other Side

As it turns out, yes, and more. My wise, usually cautious husband didn’t wonder for a second. In my darkest hour, Brian wrapped his arms around me and said, in so many words, “mai pen lai.” He couldn’t know then that Bodhi’s struggle to bond with me would stretch on for weeks and weeks, or that we wouldn’t know quite what to feed him or how to soothe him for months, or that we wouldn’t get a legitimate night’s sleep for years. The struggles were real and intense, but they were nothing compared to what was on the other side: A family formed by choice and by heart, with vulnerability and attachment and laughter and LEGOs. Nobody could know how Bodhi would blossom or how we would all grow so close that it’s hard to remember our lives without him. Now it feels like I’ve loved him since the day I was born. It’s 3:00 a.m. again, nearly eight years since the day I first met my son. I can hear him breathing in the next room, a whisper that sounds like he’s sharing secrets in his dreams. Maybe he is. Here and now, I am sharing mine. For so long, my dark night in Bangkok felt too shameful to own—I worried that if others knew about it, they would hate me as much as I despised myself. That night, something in me did have to die. The judgmental part of me, deeply attached to an idea of how things should be done and how they are supposed to feel. I needed to let go of who I used to be and trust who I would become.

Today I care less about being liked and more about telling the truth. Because of Bodhi, I’ve come to recognize that feelings don’t make us good or bad, they make us human. My son’s raw vulnerability has helped me to embrace my own perceived imperfections and find beauty in being a work in progress. Isn’t that what we all are to some degree? Through my winding path to motherhood, I’ve developed a tentative faith in the mysteries of the world, and gratitude for our place together in it. I may never know if mystical forces conspired to bring Bodhi into our lives, but these days, I am more content to explore the question rather than close in on an answer.

Laurie Shiers is a writer, a creative development coach, and the very proud mom of a boy she and her husband adopted from Thailand in 2008.

<
Previous:
Keeping Your Spirits Up During the Wait
Next:
>
When Relatives Hold Dated Views About Adoption
Sharing
Authors
Laurie Shiers 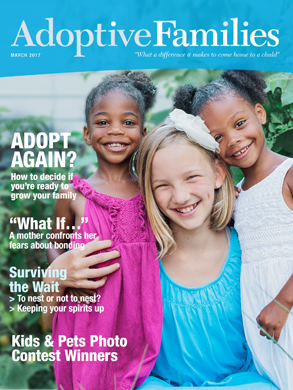 ON THE COVER: Victoria (center; 10, Russia) Amelia, and Frances (both 5; U.S. foster), daughters of Josh and Cara, Indiana. Photograph by Gabrielle Cheikh.

"Victoria was just shy of seven when the twins were placed with us, and has proven to be the most amazing big sister. The girls, of course, have their typical sibling moments, but truly adore and are very protective of each other." —Cara