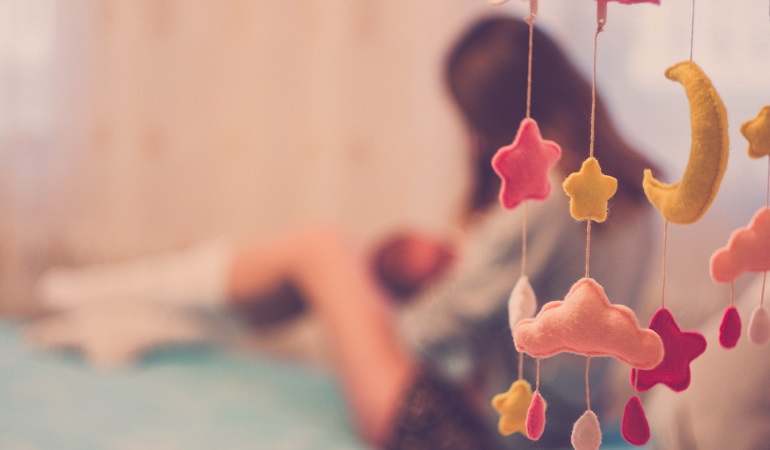 When Pam and Rob Vergun met their two-day-old son, Isaac, in the Chicago hospital where he was born last spring, the nurse asked Pam what kind of formula she planned to use. “When I told her I wanted to breastfeed, she got really excited,” said Pam. Within seconds, Isaac started to nurse greedily. “The hospital staff said Wow!” Rob recalls, smiling.

Having nursed her one-and-a-half-year-old daughter, Miko, since she was adopted at three months, Pam, a sociologist in Portland, Oregon, was already an expert on breastfeeding adopted children, supplemental breastfeeding devices, and herbs and medications women use to stimulate lactation. Today, she is one of a small number of adoptive moms who are tandem nursing their children.

“I pushed for nursing because of its health benefits to the baby,” Pam said. Only later did she find out how much it enhanced the bonding experience. “It’s so wonderful for me and them,” she says. “It’s the cuddling that comes with nursing. Even if you dont get a lot of milk, you’re way ahead.”

Although surrogate breastfeeding is common in many cultures, most people in the U.S., including adoptive parents, are unfamiliar with its theory and practice. “People are shocked when they hear about it,” says Dixie Whetsell, MS, IBCLC, who operates Beyond Birth Home Lactation Services in Portland. But times are changing. Attracted to the health benefits of breastfeeding, as well as the closeness it engenders, an increasing number of adoptive mothers are putting babies to their breast. Just like bio moms, the amount of milk adoptive mothers produce varies widely. Just like bio moms, the practice can be frustrating, discouraging, and immensely rewarding.

“The breasts are glands that really want to work,” says Tracy Throckmorton, RN, IBCLC, a lactation specialist at Legacy Emanuel Hospital in Portland. Even if they’ve been dormant your whole life, you can still induce the hormones. “Unfortunately,” she says, “many women decide against breastfeeding because they are worried about other people’s reactions.” “But everyone’s eyes are being opened to this,” she believes. “I always encourage people to discuss it with their partner and find support.”

Anthropological and medical reports of women inducing lactation go back several centuries. In many cases, adoptive nursing occurred as a result of maternal death or illness, or because the birth mother gave over or shared the care of her baby with another woman. As Barbara Wilson-Clay, BSF, IBCLC, put it in an 1996 article for The American Surrogacy Center: “Induced lactation evolved as a cultural solution to the plight of orphans in the era before artificial milk formulas.”

Today, the World Health Organization (WHO) includes induced lactation in its guidelines for breastfeeding during emergencies (such as war and natural disasters). And in the U.S., adoptive moms—and their kids—are finding the experience deeply comforting. “Bio parents have the genetic connection, the gestational connection,” says Pam Vergun. “Nursing gives me a biological connection to my children.” Her husband adds, “Any couple going through infertility feels loss of control over their bodies. Nursing gives you back some of that control.”

The science behind breastfeeding adopted children is based on a single biological fact: nipple stimulation triggers milk production. Adoptive moms don’t have the advantage of pregnancy hormones, estrogen and progesterone, which prime the breast for lactation by stimulating duct and tissue growth. But milk production itself is governed by two pituitary hormones, prolactin and oxytocin, which can be released via mechanical and drug therapy regimens. Women who are waiting to adopt, for example, often use a breast pump in preparation for nursing the baby.

Chandra Lissner is adopting through New Hope Child and Family Services in Seattle. For the past two weeks, Lissner has been following what she refers to as a hard-core pumping schedule: about 100 minutes of pumping a day, 15 minutes at a time. Already, there are clear signs of change. “My breasts have really enlarged,” she says.

Lissner has also been taking fenugreek, an herb that many lactation experts believe increases prolactin, as well as two over-the-counter liquid supplements, More Milk Plus and Mothers Lact a Flax. The day she learned that a birth mother was interested in her and her husband as prospective parents, she added 20 milligrams a day of Domperidone, a gastrointestinal drug that as a side effect increases production of prolactin, to her regimen. “I owe it to my baby to give it my all,” says Lissner, noting she gave up co-ownership of a pizza parlor to maintain a regular pumping schedule. I have complete confidence this will work out.

It’s Not About Volume

Motivation is an important part of the equation, lactation experts agree. But they also emphasize that nursing should focus on the nurturing aspects of breastfeeding, rather than the volume of milk produced. There are other concerns, too. If an adoption falls through, pumping in advance may compound the grief of some women, especially since hormonal changes brought on by mechanical stimulation can wreak havoc with already fragile emotions.

“The final question I ask all my prospective clients,” says Whetsell, is, “If you produced only a little milk, would it still be valuable to you?” “The fixation on the amount of milk a mother produces,” she says, “is a function of our bottle-feeding culture.” Breastfeeding meets so many needs of the mother and the child.

Lisa Wilson of Vancouver, Washington, agrees wholeheartedly. Although she’s been breastfeeding her son, Elliott, for two years, she has never produced much milk. “After about four months, I was getting maybe a half an ounce every feeding,” she says. “The only way I could tell I was getting anything at all was by the color of his poop.” Still, Wilson says she would have continued nursing even if she hadn’t seen any milk: “It has helped Elliott become very secure and very attached to me. She adds that it also mediates the racial distinction between her and Elliott, who is of Mexican heritage.”

“People look at me, then look at him, like Where did you get this baby?” says Wilson. Breastfeeding has helped me with entitlement, with the feeling that I deserve to be Elliott’s mother.

Like many adoptive moms, Wilson supplements her own breast milk with the use of a nursing device called a Lact-Aid. (Medela is another common brand.) This is a collapsible bag suspended on the mother’s chest. It has a thin silicone feeding tube that fits in the baby’s mouth; when the baby sucks the breast, milk flows through the tube, delivering formula or as in Wilson’s case, donated breast milk. After six months, she started nursing occasionally without the Lact-Aid. (“During these times,” says Wilson, “Elliott sometimes turns his head and asks, ‘Other milk?'”)

The cost and care of supplemental nursing devices mean that support is critical for adoptive mothers. Both the Lact-Aid and Medela can be tricky to put together, and cleaning the tubes and bags can be the last straw for exhausted moms. “I felt really apprehensive about how to use the Lact-Aid,” says Wilson. “Had I not had a lactation consultant, I might not have stuck with it.” (Here is Throckmorton’s account of the three nursing device stages: “At first moms love it. A week later they want to burn it. Then they get friendly with it.”)

Last July, about a dozen moms met in a conference room at Legacy Emanuel Hospital. The occasion was an adoptive nursing support group, where discussion focused on concerns common to any group of breastfeeding women: how to get a good latch, proper positioning, and nursing while working. Other topics were more specific to adoption: how to get Domperidone cheaply over the Internet (New Zealand is the country to search); how many extra bags to have handy for use with the nursing aids (six turns out to be a good number); and how to nurse a baby who was bottle-fed before adoption (with a lot of patience).

Another question a lot of mothers have is how to raise the subject of breastfeeding with their adoption agencies. On the day Elliott was born, says Wilson, staff members from her agency handed her a bottle. “I was cringing—Do I have to?” she recalls. But since she wasn’t sure how the agency would respond, Wilson didn’t breastfeed until she brought Elliott home two days later.

For their part, many agencies say they support nursing, even if they don’t go out of their way to recommend it. Their main concern is how the birth mother will respond. “It’s kind of tricky with birth mothers, who occasionally breastfeed,” says Paula Long, LCS, program manager with Catholic Charities in Portland. “Breastfeeding feels like the one thing the birth mother can give, and when the adoptive mother breastfeeds, her role seems diminished. Discussing the issue beforehand helps alleviate any postpartum misunderstandings,” says Long.

Few women will tell you that adoptive nursing is easy, but almost all of them will say it’s worth the effort. Pam Vergun, who now brings in a full milk supply for both of her children, likes to pass on the following story to moms whose spirits might be flagging. “There are times when I’m tired, times when I ask myself, ‘Why am I doing this?'” she says. “A few months after we brought Miko home, I was trying to nurse her, and she just refused to take the breast. Then my brother-in-law said to me, You know, babies push bottles out, too.”

That’s the message from these dedicated moms. Adoptive nursing is challenging, frustrating, and endlessly satisfying. And it’s perfectly natural.

<
Previous:
"My Decision to Adopt Transracially"
Next:
>
Parent-to-Parent: Celebrating the Holidays While Waiting for Your Child
Authors
Linda Baker