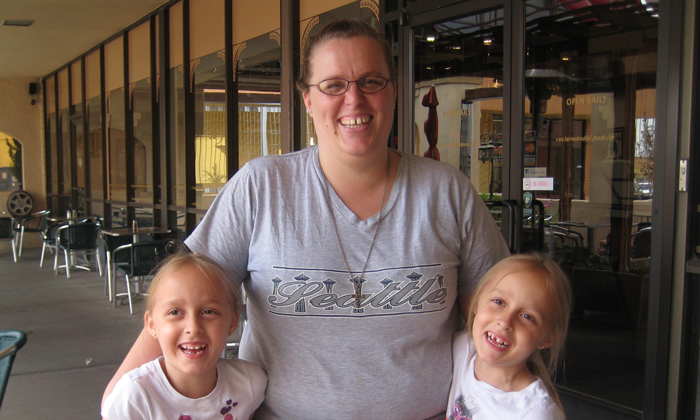 (Pictured above) Brandy Stein during a visit with her twin daughters, five years after placing them in an open adoption.

It was a proud moment for me when I sat in my gynecologist’s office and found out there wasn’t one, but two little bodies growing inside of me. The man who had fathered the twins seemed so happy at that moment. I never expected the heartbreak that would follow. Less than two months later, he and I broke up due to irreconcilable differences. He disappeared and I was left alone, pregnant with twins.

At that time, I convinced myself that I could raise these beautiful little beings all on my own. I applied for WIC and Food Stamps so I could make sure that my kids would be fed and clothed. This, along with a handful of parenting magazines, made me feel as if I could do it.

I gave birth to two healthy, six-pound girls who I named Kaylene and Cecilia. Three days later we went home.

From the first moment they opened their eyes and gave me sleepy smiles, they immediately became the joy in my life. Surrounded by family, I couldn’t imagine a more perfect life than watching my daughters grow up into beautiful women. The first two months were almost perfect. I adjusted to their feeding schedules and they started to sleep longer at night. My confidence as a single parent grew. When I started working at a fast-food place in town, my brothers were there to step in and help. Soon after that, however, things started to go wrong.

My oldest brother, Alan, and I were living with our dad and taking care of him, because he had suffered a stroke. One morning, while I was in the shower, Dad picked up both of my daughters in an attempt to help soothe their cries. He nearly dropped one of them because he couldn’t quite use one of his arms. My brother hadn’t seen any of this because he’d been in the next room. And just like that, everything went downhill rather quickly.

My younger brother, Cory, moved in with us as well because of his own financial difficulties. To his credit, he did provide some relief, helping me with feedings and watching my daughters when I went to work. However, we were in a very bad situation. There were now six of us living in a two-bedroom trailer. The cramped quarters inevitably led to conflict, with someone yelling every night.

After a few months, I’d managed to scrape together enough to move into my own place, in a different city. It was my daughters and I against the world and I was determined to win. But after a few more months, unable to find a job or a good daycare, I moved back home. Money started getting tight and it became increasingly difficult to keep diapers on hand. The girls outgrew their clothes at an alarming rate, but there was nothing I could do about it. Thankfully, WIC was still providing food for my daughters, or they may not have had even that.

“They will love my daughters with their whole hearts”

The perfect life I had envisioned wasn’t happening. I couldn’t delude myself into thinking that I could raise these two precious girls all on my own. They needed two parents and a stable household, neither of which I could provide. So I got in touch with an adoption agency. No one got back to me at first and I despaired at having to raise kids in the poor conditions we were in. I spent my nights crying because I had failed my children.

I can remember the day the adoption lady, Lisa, got ahold of me. She was very sympathetic to my plight when I told her what kind of life my daughters had. I insisted on an open adoption, because I knew I wouldn’t be able to fully let them go. I went through dozens of interviews with potential adoptive parents who lived nearby. The couples were nice, but there was always something off. They were either too eager or repeated the same phrase as the couple before them, “We aren’t really looking for twins, but we’d be willing to try.”

When I voiced these concerns to Lisa, she said she had another couple in mind, but hadn’t mentioned them because they lived nearly across the country. I wasn’t thrilled about the distance, but was willing to hear her out. Lisa told me of this lovely couple from India who couldn’t conceive. They had steady, well-paying jobs, and they were looking for twins. I thought they sounded ideal and we set up an interview through Skype.

It went far better than I expected. Both Lakshmi and Narayan were perfect from the moment we said hi. They wanted to see the girls right off the bat and spent much of the interview trying to get their attention. I thought to myself, This is perfect. They will love my daughters with their whole hearts. It also helped, in my mind, that they practiced Hindu. My limited knowledge of the religion, at the time, told me that twins are honored in their culture. So the adoption process began and my daughters left with their new parents to live on the other side of the country. My daughters were renamed Anjali and Meghna with my blessing. I felt they needed new names for their new lives.

It has been seven years since they started living in a complete family. They now have a little sister named Sahana whom they completely adore. I miss them every day, but I wouldn’t change anything. They are happy and healthy children who are able to make friends and love their parents unconditionally. I wouldn’t trade that for anything. I may have given up on being their parent but I didn’t give up on giving them a stable home.

Read an essay by Lakshmi, the mother who adopted Brandy’s twins.

<
Previous:
Letters to the Editor, RE: March 2017
Next:
>
"How I Met My Daughters"
Authors
Brandy Stein