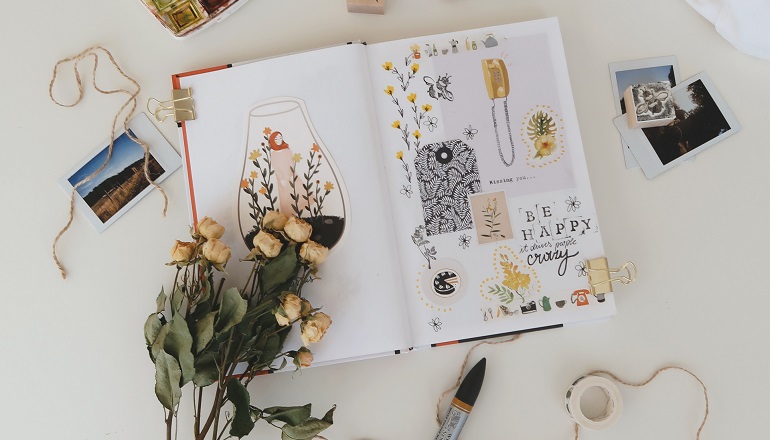 Adoptive families are often advised to make lifebooks for their children. I had read about lifebooks while waiting to adopt my daughter Emily from Brazil and was immediately attracted to the idea. Lifebooks were developed by social workers in the 1970s to help children moving through the foster care system. They were intended to create a permanent record of a child’s birth and placement history to provide continuity and to make sense of a history that might appear fragmented. The value of such a record for adopted children is clear. Because much of their history is inaccessible, incomplete, or unknown, the available scraps of information may be the only clues to their roots. Preserving what is available, however limited, is important.

Creating a scrapbook for your child sends several important messages: He or she has a heritage; we value it, and he or she can value it, too. For an adopted child, a scrapbook neither begins nor ends with the adoptive placement; rather, it weaves the child’s past into his or her present and future.

Despite my desire to create such a timeless gift for my daughter, the sudden death of my father shortly before we flew to Brazil and the subsequent demands of raising two children and managing a household and a job kept me from getting started for over a year. When I finally made the time, the sheer variety of options stumped me. Over time, I arrived at a workable solution. I chose a three-ring presentation binder in which I could store photos in plastic archival sleeves or taped with archival tape onto acid-free archival-quality paper. I included text on separate pages or as captions for photos. Interspersed in plastic zippered pockets, I put airline boarding passes; a tiny doll (the gift of a hotel maid); outfits lovingly sewn for Emily by her foster mother; a copy of Veja, a Brazilian newsmagazine. I also included our home study and the penciled notes I took when I received her referral over the telephone.

There are many other valid approaches to designing a scrapbook for your child. Three families share their ideas and their views about the importance of lifebooks.

[Lifebooks Through a Child’s Eyes]

A Work in Progress

Kathy began a scrapbook of her daughter Lori’s life shortly after adopting her domestically as a newborn. “Nothing out there on the market fit our needs, so I decided to create our own,” Kathy says. She, too, used a three-ring binder and heavy-weight stationery purchased at a stationery store. She glued documents and photos onto the paper and added handwritten captions. An early childhood educator, Kathy felt it was important to tell the story in a child’s vocabulary, so the text is written in language appropriate for a child to comprehend. Through the book, Lori’s life story unfolds as an illustrated, chronological narrative. Some photos are especially eloquent: a friend, who was there when Kathy received Lori’s referral over the telephone, had the presence of mind to capture her excitement in a snapshot. Kathy also included copies of the foster care license, Lori’s birth certificate, and a picture and description of her birth mother in the scrapbook. She had duplicates made of precious photos and safely stored the originals. Kathy adds to the scrapbook regularly to keep it up to date. When she comes across something that might be scrapbook material, she puts it into a box. She takes the box on vacations and sorts through it, selecting materials to add. Kathy recognizes that the scrapbooks reflect herself and her values. She sees the books as her “loving gift” to her daughter, representing a lifelong commitment, a work in progress.

Vera and her husband have two children adopted from Korea: David, 5, and Wendy, 1. Each has a scrapbook, fashioned from fabric-covered photo albums. Vera’s decision to make scrapbooks for her children was influenced by her husband’s experience. An adoptee of German birth parents, he successfully sought his birth mother in Germany shortly before David’s adoption. “I thought a lot about birth mothers after that,” Vera says. For David’s book, Vera had ready-made text available, telling the story of David’s adoption. She had written a long, detailed letter home from Korea describing the journey. She photocopied the letter, then cut and pasted it to make captions for the photographs. To this, she added adoption documents. Recently, the agency sent them a precious photograph of David’s birth mother, and it’s now included in his book. Like Kathy, Vera sees a scrapbook as different from a baby book or family photo album. The scrapbook tells the story of each child’s journey through life. She sees herself as custodian of the scrapbooks, ownership of which will one day pass to her children.

When children undergo multiple placements, important history may be lost. Penny, the adoptive mother of four children aged 19 to 24, believes that parents owe it to their children to make every effort to recover it. “All adoptive families have a responsibility to collect every single scrap of information they can possibly get on their children,” she says. “And label where it came from,” she advises, noting that information about a child who has been in public care is often inaccurate or simply wrong. Notes from a caseworker’s file on the birth family should be included but identified as hearsay, not fact. For a child about whom little is known, she would include stories or articles about children in similar circumstances. For her Korean-born child, Penny collected articles and information about political and social issues in Korea. “Including this information has given my daughter a much broader spectrum on how she fits into the whole scheme of things, a timeline of what’s happened to her individually parallels what’s happened in her country.”

Penny does not shy away from including difficult information as long as it is nonjudgmental and framed in developmentally appropriate language. All history contains positive and negative elements. It is important to a child’s sense of self to understand the negatives as well as the positives. Penny points out that withholding information may cause a child to imagine something harsher than the reality. She also notes that some of the most excruciating experiences make the best scrapbook entries. Memories of an awful year the child managed to live through may strengthen a child’s self-esteem more than a record of only upbeat successes. The more facets, easy and difficult, included in the book, the fuller and richer the portrait of the child that emerges. Penny thinks scrapbooks can also help adoptive families reach out to birth families. “I would like to see birth parents involved in the actual scrapbooking process, even in semi-open adoptions involving intermediaries. Birth parents could send information, pictures, and letters that would enrich and add another dimension to the child’s history.”