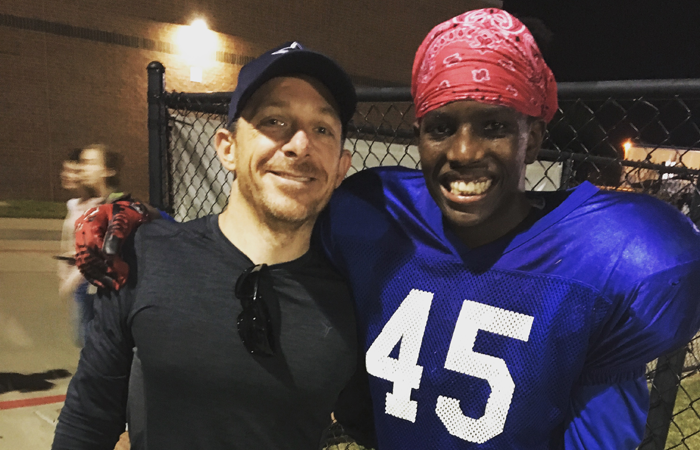 We live a couple blocks from a church that holds bible study every Wednesday for middle and high school students. Back when Daylight Savings had begun, we let Isaac ride his bike there and back. It seems like they don’t have a firm structure or end time, because every Wednesday around 8 p.m., we have the same negotiation about his curfew.

Most nights he just responds, “OK.” But tonight, a late summer evening, he texted back, “Can we make it 9?”

I responded, “Sorry. I don’t want you riding your bike home in the dark.”

“But we just started the lesson.” A few moments pass, then he added, “Please.”

My son understands I’m not suspicious that he would be up to anything. But he doesn’t understand that we can’t have him ride his bike home in the dark…even if he’s only 15 houses away. When I was a kid, it seemed like parents were always telling us to watch out for cars or not to talk to strangers. I guess their greatest fear was that we would get hit by a driver who wasn’t paying attention, or be kidnapped. But today, at least for Laurie and me, our greatest fear is a stranger seeing our boys alone in the neighborhood, assuming they’re up to no good simply because of race and gender, and taking action.

Isaac is 14 years old, but he’s  six feet tall and almost two hundred pounds. He’s also black. He hasn’t been a discipline problem since the day he came home. But to someone who has never met him, he could be seen as a threat.

Laurie and I try explaining our fears to friends and family, and some get it. But for the most part, people seem to think we’re paranoid. Or at least overly cautious. When the Trayvon Martin shooting happened, Laurie and I were and still are terrified the same could happen to our boys. To our family and friends, Isaac is this big, lovable jokester. “Oh, that couldn’t happen to him,” they say when we share some of our fears with them. “Not to Isaac, he’s a good boy.” They don’t understand that, to the outside world, he is not an adorable little boy anymore.

Ultimately, we don’t need people to understand that we live in a biased and scary world. Nor do we need Isaac and his younger brother to fully understand this either. At least not yet. As time goes by, we set the guidelines we need them to follow…stay on the sidewalk, don’t put your hoodie up, etc. But we want them to be able to live in a world where they can maintain the innocence of youth for as long as possible. Isaac knows who Trayvon Martin was, but mostly he follows our rules simply because they’re Mom’s and Dad’s rules.

Because of this, he doesn’t think anything’s weird when I text him back, “I’m heading to the grocery store and then will meet you at the church at 9. I’ll drive alongside you as you ride your bike home.” When I arrive, he flashes me a big grin and waves goodbye to his friends, not at all embarrassed at how ridiculous we look as we pull out of the church’s parking lot side-by-side. We ride the three streets it takes to get home together, at about 10 miles an hour, and talk about our day. Then when we get home, he takes a shower and I make him a snack. As he’s getting his pajamas on, we can hear him singing and dancing around. Finally he comes downstairs in his men’s XL bathrobe, gobbles the snack I made, and gives me a big bear hug. “G’night, Daddy.”

“Nope,” he says. “You’re always gonna be Daddy.” Then he squeezes me harder, and buries my face into his chest. And with my face smothered in his red flannel bathrobe, I say in a muzzled tone, “Sounds good to me.”

<
Previous:
“The Fine Line Between Letting Go and Being Let Go”
Next:
>
[EXCERPT] Those Three Words
Authors
Billy Cuchens