Q: Does anyone else who has struggled with infertility (in our case, secondary infertility) find baby showers difficult? And, even though they’re painful enough on their own, they often seem to lead to questions about children.

At a recent baby shower, another guest asked how many children I had. When I replied, “One. I have a little boy,” her response was, “Oh, so one was enough, huh?” Actually, no.  One isn’t “enough” for us.  But not everyone can just pop out babies whenever they want, however many times they want, without any problems. That is not how I responded, although that’s what I wanted to say.

How do others respond to questions or comments like this without being rude or disrespectful?

“I can commiserate with you on the shower thing. I once had someone tell me maybe I was doing ‘it’ wrong and that’s why I couldn’t get pregnant. Another time, after I said we were hoping to adopt, the person responded, ‘Maybe your son is happy being an only child’ and said we shouldn’t adopt because there’d be such a big age gap. I was fuming! The best advice I got about responding to insensitive comments came from our home study social worker. If someone makes a rude comment or asks an inappropriate question, she advised that we turn it on them: How did you decide on the size of your family? Why are you asking? Is adoption something you’re thinking about? I have also just declined a few baby shower invitations. No one realizes how painful they are when you are waiting for a new little one through adoption.”

“I also have one biological child and have gotten a lot of ‘Isn’t it time for another one?’ or ‘Doesn’t he need a brother or sister?’ I think people assume that, because you have one, another one is just going to follow along. When I get these questions, I usually say something about trying to adopt—but I do wonder why I feel I owe these people any explanation.”

“I’m not sure there’s anything that helps with these insensitive comments while you’re hurting. I remember coming to work one morning when I had started my period—therefore knowing I was not pregnant, AGAIN—and walking by a coworker who was talking to others about her pregnancy. As I passed, she casually said, ‘So, when are you gonna procreate?’ I flipped out. I told her rather loudly that I can’t and it was a horrible day for her to say that to me. Some time later, however, that same woman cautiously approached me with some information on infertility. I told her, ‘It’s OK, I have my kids now’ (we had a foster adoption placement). Turns out, she actually has the same disease I do that causes infertility and had tried for two years to get pregnant.’

“I am so sorry that you are going through this. The best response to a rude question is ‘Why do you ask?‘ This puts it back on them. I’ve never understood why people feel they should share their opinion so freely.”

“Personally, I have gotten fed up with people asking, ‘Do you have kids? Why not? Don’t you want kids? When are you going to have kids?’ Now I flat out tell them, ‘We can’t have kids, actually.’ It shuts them right up. I know it’s a bit harsh, but I want people to think twice before asking such a personal question. As for the baby shower thing, I had to go to one a few months ago and it was definitely hard, but I pushed through it. I wanted to be happy for my friend because she’s a good person and it wasn’t her fault we were having our troubles. People just don’t understand unless they’ve gone through what we’re going through, no matter how hard they try to. That’s why I come here to vent and talk to other people going through the same thing.”

<
Previous:
"One of the Missing Pieces"
Next:
>
"Race...and Starbucks" 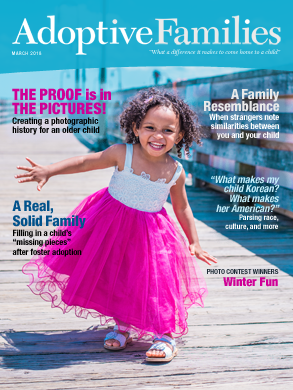 "This photo was taken at our adoption day celebration in June 2017, when I adopted my daughter from foster care. This particular shot captures Kaileigh's amazing smile, sense of humor, and beauty. She is the sunshine in my life and an amazing child." —LORRY