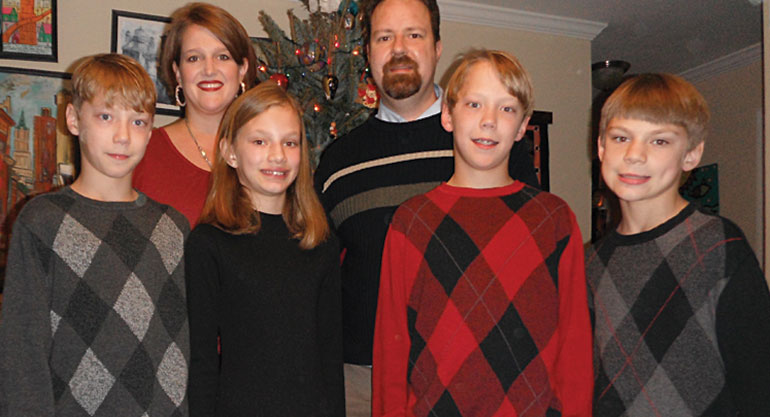 Introductions are often fleeting. We shake hands, exchange names, then search for common ground on which to build a relationship, or at least get through the evening. We rarely give introductions much thought–they are simply one of the oils that help the social machine hum along. But there are some first meetings that are indelible–meeting your childhood hero, the moment you met your spouse. And then there are those planned meetings that you know will touch you at your core. Before I ever saw my four children, I knew that making their acquaintance would leave me forever changed.

The orphanage director led the little boy to the center of her office, where he stood looking down at the linoleum floor, eyes hidden by the bill of his red and blue cap. He looked like he expected to be chastised. I wanted to go to him right then, put an arm around him, and show him everything was alright.

Lala, our facilitator, translated, “This is Artyom.”

My wife, Maris, and I went to where he stood, huddling around him. I touched him on the shoulder, and he seemed to wince as though I had re-opened an old wound. Squatting beside him, not saying anything, we waited for him to be ready. Finally he looked up at me. What marvelous eyes, so bright and blue, like an afternoon sky in April after a long, gray winter.

Maris took him by the hand and led him to our ladder-back chairs. Artyom followed like a well-programmed automaton. She picked him up and he sat on her lap with a stiff back. But when she slipped her arms around him, he leaned back and let out a breath that sounded like melting snow falling from the eaves.

The gravel crunched under our tires as we pulled up to the hospital, a gray concrete box. No one was at the receptionist’s window. The hospital appeared to be deserted. I asked Lala where the staff was. She shrugged.

We made our way down an empty hall, searching for someone who could take us to meet Maksim, when suddenly we heard banging on one of the windows. We turned and saw a blond-haired boy with his face pressed against the glass. “Artyom!” he yelled. “Artyom!”

The commotion must have drawn someone’s attention, because a nurse appeared. She ushered us to a bright room where metal folding chairs had been set up in anticipation of our arrival. We sat, Maris holding Artyom in her lap.

When Maksim entered the room with the nurses he ran to his brother, and Artyom’s face widened in a grin. It was the first time we’d seen him smile. He jumped down from Maris’s lap and stood close to his brother. He put his lips right up to his brother’s ear and whispered something. Maksim laughed.

“Hi,” I said to Maksim. He turned and looked at me, as if making sure that the comment was directed at him. When he saw that it was, he glowered. I reached out and he let me hold his hand, but continued to scowl. I unzipped the backpack we’d brought with us and fished out a box of Teddy Grahams. Both Maksim and Artyom were curious and approached. I gave them each a few little cookies. Maksim studied his for a moment, but when he saw his brother eating his without reservation, he put one into his own mouth, then another and another until they were all gone. He looked up at me and, in a high voice that was barely audible, said, “Yesho.”

The years after bringing Maksim and Artyom home were brimming with the excitement of being a new family. While being a dad was filled with challenges, it was also full of joy and love. Maris and I wanted our joy to increase, and that desire eventually led us back to Russia, where we sat on a bench in an orphanage playground waiting to meet Galina and Ivan. A high stucco wall ran around the perimeter of the yard. The orphanage door opened and a little girl and boy with exactly the same bowl haircuts toddled out to meet us.

Galina stood before us, her face confident and welcoming, while Ivan hid behind her. The director said something to them and the children approached. We picked them up and held them in our laps. Ivan was stiff in Maris’s arms and seemed to look to his sister for guidance, but Galina was busy staring at me with her dark almond eyes, lips quivering as if stifling a laugh. I kissed her cheek and whispered, “Hello.”

Galina was so outgoing, so gregarious, and I wondered how she had managed to keep from being institutionalized. She was already four years old. Did she remember the world beyond the stucco wall? I wondered how long it had been since she had seen anything outside of this place, and hoisted her up so that she could peer over the top. Her already joyful face bloomed as her eyes darted from this building to that tree to the red Lada whirring up the road.

My arms began to tire, and I put her down. Holding hands, we walked back to the bench where Maris sat cradling Ivan. By now he nestled on her shoulder, as though resting after a long journey, and he held her arm in both of his, not daring to let go.

I often think about those first meetings, when I was not yet my children’s father, and about how those moments led all of us to something more beautiful than we could have ever imagined. What once was a group of strangers has become a vibrant, loving family.

In the wake of the ban on American adoption from Russia, I hold my kids a little tighter when I tuck them in at night. I kiss them a little longer before sending them off to school, and I wonder what might have been if the ban had come a few years sooner. Artyom would still be living by rote. Maksim would still be scowling. Galina would still be living behind that wall. Ivan would never know the warmth of a mother’s lap. There are so many Artyoms, Maksims, Galinas, and Ivans who no longer have the opportunity to find a home because powerful men won’t let them. For now, the introductions have ceased, and though I’m not directly affected by the ban, something deep inside me feels the loss and grieves.

<
Previous:
"Our Frantic 24 Hours After Getting the Adoption Call"
Next:
>
Parent-to-Parent: Was It Fate?
Authors
Austin Wimberly