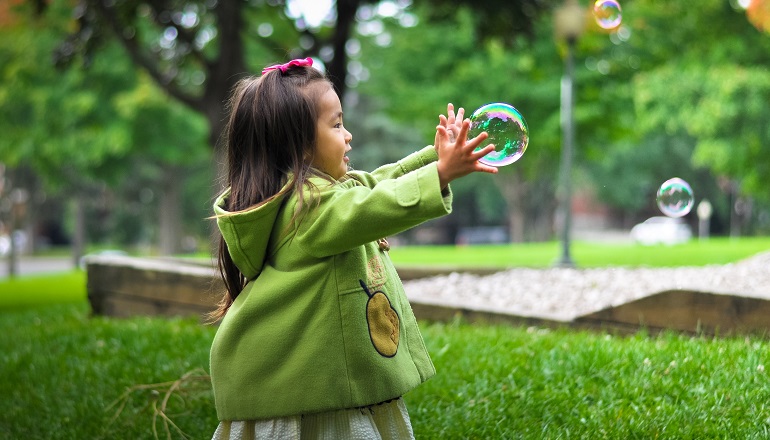 Two years ago, on a breezy afternoon, three teary, blue-eyed people—my husband, my older daughter, and I—opened the door of an adoption administration building halfway around the world, and entered a room that was lined with polished wooden benches and filled with babies. I turned, and there was the face I’d memorized from three well-worn referral photos. I looked at her, then at a caretaker. The woman nodded. The nine-month-old looked up and stared at me with deep, chocolate eyes.

An hour later, we took the girl we would come to call Hanna onto a bus, back to our hotel, and into our lives. Hanna did not make a sound the whole day. Not a coo, whimper, or cry. But as she sat on my lap in the bus, she gripped my thumb with her tiny hand and held tight. I gotcha, Mom, and I’m not letting go.

Calling this “Gotcha Day” trivializes the moment, some in the adoption community would say. For many of us, the term is shorthand for “The Day I Got You.” While I acknowledge that the word carries only a hint of the day’s complicated meaning, to me, “gotcha” says it all.

Those who dislike the term say that “gotcha” puts a silly, insensitive spin on a momentous day. Perhaps they are right. In general, we say “gotcha” when we tickle someone, or when we play a joke and the victim discovers he’s been had: “Gotcha!” But it’s also what we say when we catch someone who is falling, or to someone who needs reassurance. “I gotcha,” we say softly.

The other day my daughter, now almost three, and I played a game in which I pretended to fall off the bed. She grabbed me and said, “I gotcha, Mommy.” Then she pretended to fall, and I grabbed her, saying “Gotcha, Hanna.” I saved her and she saved me, over and over again.

I’ve heard it said that, for an adopted child, “gotcha” implies “lost ya,” as in losing a first family and a culture. But a new union of love and joy becomes possible only after a previous loss. I wish this were not so, but my daughter was left alone beside a wall on a winter night. Gotcha was her only hope.

In the months after we brought Hanna home, as she crashed into our lives with screams and tears, there were times when we all worried that we’d made a mistake. When we tried to reach her, and she shut us out, I thought of the day we got her—when I felt her little hand holding tight, telling me what she could not yet say. And I held on, too.

Eventually, Hanna calmed down and blended into our family. She’s become one of us, so different, yet so the same. And every year, when November 1 rolls around, all I know is that it’s Gotcha Day all over again, and I want to celebrate it with abandon.

I have tried to think of another name for this day. Adoption Day? Officially, that was not the day we adopted our daughter. But it was the day we first held her. It was the day that fantasy flowed into reality. The day hope landed. Reality Day? Hope-Landing Day? Thank-Our-Lucky-Stars Day? It’s the day we got Hanna, connected with her in a moment none of us will ever forget. It’s the day Hanna caught me, falling into motherhood, and held on tight. Gotcha, Mom, and I’m not letting go. Ditto, Hanna. Me neither.

[Instant eBook: How to Talk About Adoption]

For the record, the adoption term I have trouble with is “Forever Family.”

There’s no need to state the obvious.

<
Previous:
Ask AF: When Is Cuddling Appropriate?
Next:
>
The Decision to Adopt Out of Birth Order
Authors
Stacy Clark