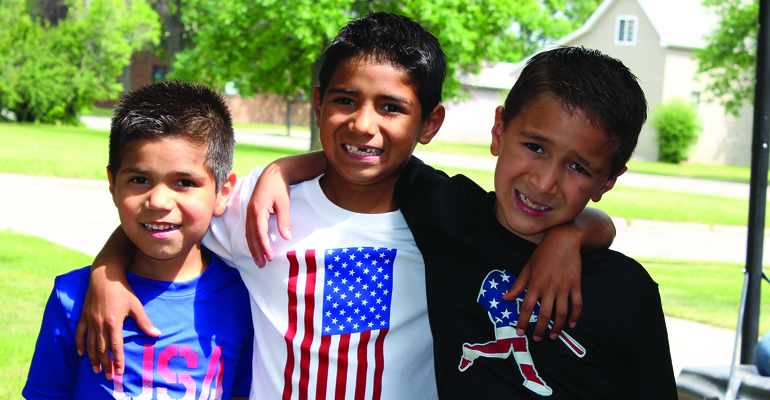 In the United States foster care system, there are more than 100,000 children who are legally eligible for adoption. Each year, about 30,000 children turn 18 and “age out” of care, with no permanent family and nowhere to go.

In 2013, the Dave Thomas Foundation for Adoption released its National Foster Care Adoption Attitudes Survey. It conducted similar surveys in 2002 and 2007, polling more than 1,400 adults each time to gauge public opinion and beliefs about adoption.

“So, what did the findings show, and has there been any positive movement since our last survey, in 2007?” writes Rita L. Soronen in her introduction to the survey results. “Actually, not much. That’s a problem. And an opportunity. It means that our mission — to find forever families for children in foster care — is more important than ever.”

In honor of National Adoption Awareness Month, in November, Adoptive Families is proud to take up the call to action prompted by the survey, to “dispel the myths that surround the children…in the foster care system,” by sharing the facts and real experiences that can change minds.

There were several positive findings in the 2013 Adoption Attitudes Survey. In general, this country is pro-adoption. And, interestingly enough, Americans think more favorably about foster care adoption than they do about international adoption or private infant adoption. A full 84 percent of Americans have a “favorable” to “extremely favorable” opinion of foster care adoption, compared to 65 percent for international adoption and 80 percent for private infant adoption.

Given these findings, why are 101,719 children still waiting to be adopted from foster care? Why is the percentage of individuals with post-graduate educations and married couples who have considered adoption down by 10 percent since 2007? Part of the answer may be the misperceptions that Americans hold about adopting from foster care and about the children in the system.

#1 There aren’t that many children available. The Foundation survey found that Americans underestimate the number of children available for adoption from the foster care system. Only 36 percent knew that there were more than 100,000 children waiting to be adopted. The rest assumed the number to be lower.

“There’s no shortage of children,” says one mom who adopted a sibling group, ages one, two, and three, from foster care. She’s currently fostering an eight-year-old, and continues to “get calls and profiles weekly.” Parents seeking to adopt from foster care should note that the narrower the constraints they place on the type of children they will consider, the longer the wait may be for placement. Prospective parents who will consider only a baby or toddler, say, or won’t consider a sibling group, may wait a long time.

#2 Most children in foster care have serious behavior problems. When asked about the reasons children wind up in foster care, about 50 percent of Americans “strongly agreed” or “somewhat agreed” with the statement that these children were “juvenile delinquents.” In reality, children enter foster care because of parental neglect, abandonment, or abuse — not as a result of their own actions.

As one mom who adopted siblings through the Texas foster care system explained, “Both of my children are straight-A students, and neither has behavioral problems. I think the thing that scares people is the labels they put on these children. My daughter was two and the foster system had her in physical and speech therapy. After a month with us, we were able to show that she was perfectly developed for her age.”

While there is nothing about foster children themselves that has led to their entering care, some have special needs as a result of their early experiences, especially as months and years in the system add up. A mom who has fostered five children, and fostered and adopted half-brothers, says, “Both of the boys have developmental delays and mood disorders, but we expected some of that, given the parents’ history.” And, she noted, “We have many friends who adopted from foster care, and some of their kids have health issues and some do not.”

#3 It’s expensive to adopt from foster care. A full 82 percent of those who have considered adopting a child are concerned about the cost. Specifically looking at foster care, 39 percent believe that foster care adoption is “somewhat” or “very” expensive. In fact, according to the 2007 National Survey of Adoptive Parents, 56 percent of parents who adopted from foster care reported paying no adoption expenses at all; 29 percent paid more than $0 but less than $5,000. The 2011 Adoptive Families Cost and Timing of Adoption Survey found the average cost of U.S. foster adoption to be about $2,200, while the average cost of U.S. newborn and international adoption was $30,000 or higher.”

The total cost of both of my adoptions was $30 — and that was because we wanted duplicate birth certificates. Otherwise, they would have been free,” says a mom who adopted a six-month-old and a 17-month-old from foster care.

In addition to being the least expensive route by far, foster adoption may qualify families for post-adoption financial support. The 2007 National Survey of Adoptive Parents found that 78 percent of children adopted from foster care receive a monthly adoption subsidy; 64 percent receive a subsidy and health coverage, such as Medicaid. Several states waive all or some college tuition fees for foster or former foster youths attending state schools, or offer special scholarship programs.

#4 Birth parents can take back a foster child. Of those who have considered adoption, 79 percent are concerned about “being sure that the birth parents could not take the child back.” AdoptUSKids reassures potential parents: “Adoptions of children from U.S. foster care are legally binding agreements that do not occur until the rights of all parents have been legally terminated by a court of law. It’s very rare that an adoption is challenged in court.”

Historically, it’s been uncommon for a child adopted from foster care to stay in touch with his birth parents after the adoption, because foster children tend to be removed from parental care due to concerns about their safety or well-being. But some families adopting from foster care are taking a lesson from domestic open adoption and agreeing to some degree of contact. This is not always easy; one mother shared the difficulty of maintaining contact with a birth parent with mental health issues. However, contact can also be positive: “Our son has been with us for 13 years, and I have found it helpful for him to be able to see his birth mother. They each get to see how they have both matured over the years; neither is a ghost to the other.”

#5 Adopting from foster care is hard, and social workers will pry into our lives. When people think about foster adoption, they are concerned about the difficulty, and the intrusiveness, of the process. Eighty-three percent of respondents who have considered adopting a foster child cited concerns about “coping with the paperwork and bureaucracy involved.” Responding to a question about perceptions of the process, 43 percent believe that it is “extremely difficult” or “very difficult” to adopt from foster care. Seventy-four percent were concerned about “dealing with the public social service agency or other adoption agencies.”

Some parents who have adopted from foster care dispute these myths. “It was so easy to foster and adopt!” said one mom, who adopted in California. “It requires paperwork, some classes, a visit to your home, and interviews. And once you are approved, placements are easy to come by.”

Many others acknowledge that both myths are true to a certain extent, but place them in the context of the greater good. As one mom rationalized, the process can feel intrusive, but the social services workers “are trying to make sure they find the best home for the child.” A mother who adopted four children from foster care summed it up nicely: “Since our adoptions were finalized, we haven’t had social workers in our lives unless we needed something. We have been left to be a family.”

In the survey’s conclusions and recommendations, the Dave Thomas Foundation pledges to renew its efforts to “expand awareness about the realities of foster care adoption,” to “inform potential adoptive parents about the need, the affordability, and the finality of foster care adoption,” and to “reinforce that every child is adoptable and every child deserves a loving family.” What will you do?