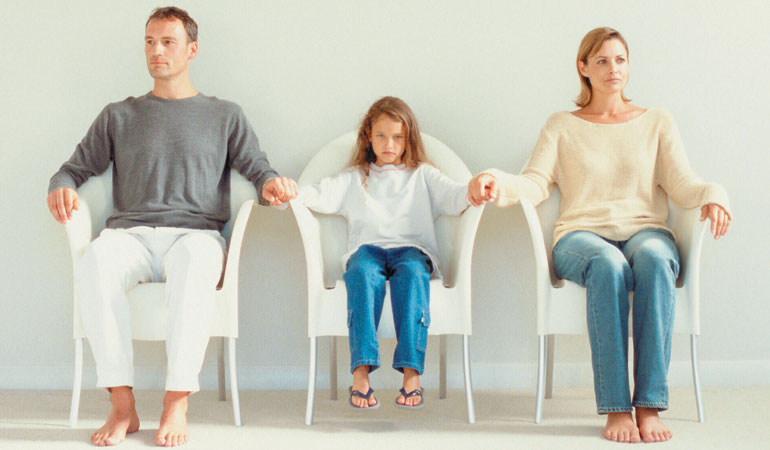 When Mike Hanson set out to start a family, he didn’t expect his marriage to end in divorce shortly after. “Adopting a child changes the chemistry of a marriage, just as a biological child does,” says Hanson, who split with his wife when his son, Sam, was 2. “But somehow, divorce is not expected in adoptive families, when your family has been approved by the government.”

We’ve all heard that divorce is on the rise in the United States, but it may surprise you to learn that fewer adopted children have divorced parents than do biological ones. (One study shows 11% of adopted kids, compared with 28% of nonadopted kids, are affected.) However, divorce happens in adopted families, often soon after the appearance of a child.

You might think that our kids, many of whom have already faced dramatic struggles, would be particularly at risk from the effects of divorce after adoption. In fact, research by David M. Brodzinsky, Ph.D., author of the classic, Being Adopted, found that adopted and nonadopted children were equally impacted by divorce. Still, there are some problems we need to be aware of.

Adoptive parents contemplating divorce may worry that their child will feel abandoned again. Minneapolis child and family therapist Susan Schultz urges parents to remember that not all adopted children feel abandoned, and that a divorce will not necessarily set off or heighten such feelings.

However, for kids adopted as toddlers or older, divorce might stir up fears about loss and change that they may not be able to talk about. Parents should be alert to signs of anger and sadness, and be ready to help their child make sense of those feelings. Schultz says, “Think about how things feel to a child, and consider what memories of past experiences might create anxiety” during these changes.

Dealing with divorce may cause your child to put off facing adoption-related feelings. Cheri Register, author of Is That Child Yours? American Families with Children Adopted from Other Countries, says that’s what happened to her daughters, Korean-born Grace and Maria. Her older daughter’s therapy when she was a teen centered around her absent father. Only later did she address the cross-cultural and adoption areas of her life. “For them, the divorce was the immediate issue,” Register says.

All children undergoing the stress of divorce need the same things: a loving, stable environment; minimal exposure to conflict; and reassurance that they’re not to blame.

Chris Tomasino and her ex-husband owned two homes — an apartment in Manhattan and a country house in Pennsylvania. Their China-born daughter, Nora, who was 4, didn’t have to adjust to a new house. Tomasino’s ex-husband stayed in their country home, she in their city one, and Nora moved between the two, as she always had. “I felt that it was important that she have the same house, neighborhood, and school,” Chris says. “I wanted as little disruption as possible. And I wanted her to know that, when we said we’d be her forever family, we meant it.”

Although such geographic stability is impossible for many families, Schultz says that being clear about living arrangements helps reassure children, especially young ones. “Little kids are less concerned about what happened in the marriage and more concerned about what is going to happen to them. They want to know: Where am I going to live and sleep? When will I see Dad and Mom?”

Stability is important to your child’s relationships with others, too. Mike Hanson maintains friendships with his ex-wife’s friends — even those she herself hasn’t kept up with — so that Sam, now 5, can keep seeing people who have been important to him.

Putting new relationships into the mix requires greater delicacy. Some newly-single parents find that new romantic relationships compete with their commitment to their children.

Parents can’t tell their children too often that the divorce is not their fault. “Kids are egocentric in their thinking,” Schultz says. “They conclude that something about them caused the divorce. This may be especially true for adopted kids, who might already suspect they have a defect, since their birth parents couldn’t care for them.”

Chris Tomasino and her ex-husband repeatedly told their daughter the divorce had nothing to do with her. Nevertheless, Chris says, Nora has struggled with “an enormous sense that she was at fault, that, maybe if she had been different…”

Many divorced people believe they shouldn’t criticize the other parent, wanting to keep their children out of their conflicts. But should this rule be maintained at all costs? Cheri Register says no.

Register’s ex-husband moved away nine months after their divorce, when their daughters were 4 years and 18 months old. She says she stuck to the no-criticism rule for a few years, until she finally had to acknowledge that her children were suffering as a result of his absence. “I had to be an advocate for them,” she says.

Overemphasizing parental equality also can hurt children if it leads to inconsistent living arrangements. Susan Schultz doesn’t go so far as to advocate single parenthood, but she believes that the popular 50-50 custody split needs to be rethought. “The courts are starting to learn that joint custody doesn’t always work for kids, particularly as they get older,” she says. “Week-on and week-off won’t work either, especially for a child 5 or younger.” A better arrangement has children living most of the time in one home and visiting the other.

Parents may not be able to eliminate the stress that divorce places on their children, but being flexible can help make the process less painful.