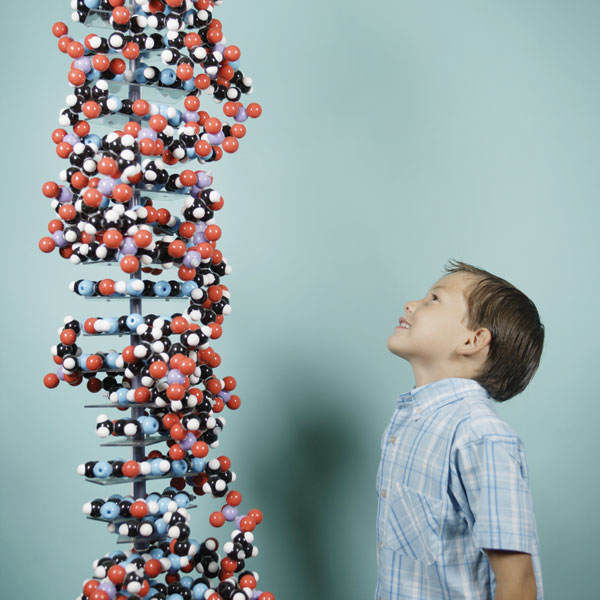 Jenae Neiderhiser bears a strong resemblance to her adoptive parents — she, like them, is of Irish and German heritage — but it was their differences that led to her interest in studying genetics. “Physically, we look alike, yet we’re different in so many ways,” she says. She was raised in a home where no one in her immediate family had finished college, but Neiderhiser not only attended and graduated from college, she went on to get a Ph.D., and become a college professor. Was there something in her biological makeup that led to her academic success?

When Neiderhiser met several members of her birth family as an adult, she was interested to learn that some of them were academics. For example, one of her birth mother’s brothers is a college professor.

Now, as a professor of psychology at Pennsylvania State University, in University Park, Pennsylvania, Neiderhiser has been researching the genetics of adoptive families. She’s one of the principal researchers on the Early Growth and Development Study, funded by the National Institutes of Health, which explores families and open adoption. We reported some of the early findings in “The Birth Parent Perspective,” and now Neiderhiser and her colleagues are delving deeper into the data to learn about children’s behavior, and the biological and environmental influences that shape it. “I guess it’s true what they say, that a lot of research is really ‘me-search,'” says Neiderhiser.

The findings add to the growing body of knowledge about the role of genetics in personality. Read on for a brief history of what we’ve learned so far, and the exciting ways Neiderhiser’s research may change what we know about genetic traits–and the way we parent our children.

Scientific research on twins and adoptees has given us some insight into the role of genetics in personality. Researchers have found several surprising traits that may be coded into our genes. While they may give you an “aha!” moment about your child, Neiderhiser cautions against thinking that a genetically-influenced trait is immutable. “It is rare for more than half of the variance in any trait to be explained by genetic influences,” she says. “That means the other half is due to environmental influences. So if something is heritable, it is also definitely influenced by the environment.”

Extroversion and Risk-taking: Scientists have known for a few decades now that genes play a role in personality development. Some of the first proof of this came from a University of Minnesota study on twins, reported in 1986 in the Journal of Personality and Social Psychology, which revealed that the tendency to seek new experiences and take risks is more than 50 percent heritable. What’s interesting is that, while family and other environmental factors do have a significant influence on these traits, they don’t completely overrule them — so a family can encourage a shy child to be less timid, but he’ll never be completely extroverted.

Happiness: Your happy-go-lucky kid may have his birth parents to credit for his sunny disposition. New research on twins from the University of Edinburgh and the Queensland Institute for Medical Research, in Australia, published in the March 2008 issue of Psychology Science, shows that happiness is partly due to inherited personality traits. While happiness itself isn’t inherited, certain traits that predispose people to happiness, like sociability and not excessively worrying, are genetically-based. But the researchers say that these traits control only 50 percent of a person’s likelihood for happiness — so even a glass-half-empty child will perk up when surrounded by friends and a pleasant environment.

IQ: Those nightly bedtime stories do pay off: When children are young, external factors, like nutrition and exposure to books and toys, play a huge role in their IQ level. At age five, verbal IQ is 52 percent environmentally-based, according to a twins study from Vrije University, in the Netherlands, published in Learning and Individual Differences in 2007. Interestingly, as a child grows up, environment seems to matter less — by age 18, verbal IQ is 84 percent based in heredity. “There may be a wide range that one inherits — the range is influenced by genes, but where one falls within that range is influenced by environment,” says Neiderhiser.

Conservatism: Ever wonder why you’re raising a McCain fan in your pro-Obama household? Conservative beliefs have some genetic components, according to research from the Colorado Adoption Project, published in the Journal of Personality and Social Psychology in 2002. The researchers found a significant genetic influence in conservatism as early as age 12. Family values and other environmental influences do have a large effect on a child’s attitudes and opinions, but, much like IQ, as the child enters adulthood, biologically-based conservatism plays an increasing role.

Religiousness: While a child’s religion itself is entirely environmentally-based, his religiousness, or likelihood of believing in and practicing religion as an adult, is actually inherited. In a twins study at the University of Minnesota, published in the Journal of Personality in 2002, researchers found that religiousness (judged by factors like frequency of attending services and the importance of faith in daily life) became less environmentally-based as the child entered adulthood. (Makes sense — without Mom and Dad to drive him to Sunday school, Johnny may start sleeping in and skipping church.) But the researchers also discovered that when a child grows up, and environmental influences fade, religiousness is somewhat encoded into his genes — “internal” religiousness, such as seeking help through prayer, is based on a biological inheritance.

The landmark research from the Sibling Interaction and Behavior Study (SIBS), launched in 1999 by the University of Minnesota’s Center for Twin and Family Research, gives us several clues about traits that are minimally influenced by genetics. The study included both adoptive and biological families, and has disproved several myths about adoptees.

Antisocialness and Aggression: In measures of problem behaviors, the differences between adopted children and children being raised by their biological families were so small as to be insignificant. These positive findings contradict earlier research that found adopted adolescents to be at greater risk for psychological problems than their non-adopted peers. (Researchers think that the results of these earlier studies may have been skewed, because they looked at adoptees who had had some trauma in early childhood. The children involved in SIBS were adopted as infants.) However, the average age of the adolescents in the study is only 15, so it is possible that differences between adopted and non-adopted individuals may emerge later.

Academic Achievement: Despite the influence of heredity on IQ, academic performance isn’t determined by genetics. SIBS researchers found that the adopted children in their study performed as well academically as did their non-adopted peers and siblings, thanks to consistent environmental factors, like quality of the school system and parents who encourage school achievement.

Ability to Bond: Relationships were equally close and loving among all kinds of sibling pairs. Although biological siblings thought of themselves as being more alike, a lack of similarity did not affect the quality of relationships between adoptive and biological siblings. Birth order was much more significant in sibling relationships than was adoptive status. The older sibling was almost always more powerful in the relationship, regardless of whether he or she had been adopted. In addition, parents and children felt as attached to each other in adoptive families as in biological families.

How Important Is Genetics?

The short answer is, not as important as you might think. When it comes to personality, genetics do play a part — but not necessarily the starring role. “There are no traits that are solely genetic or environmental — all personality characteristics and leanings are an interaction between both,” says Harold Grotevant, Ph.D., director of the Rudd Adoption Research Program at the University of Massachusetts Amherst.

Environmental influences, especially parenting, have the power to encourage or stifle an inherited trait. A naturally sociable child in a life-of-the-party family is likely to become even more extroverted, but that same inherently sociable child in a quiet family probably won’t be so outgoing. Neiderhiser’s study demonstrates how much environment can influence genetics (see “The Power of Parenting”).

Much is still unknown about genetic traits. “Traits relating to personality, abilities, and mental health are not inherited in a simple dominant-recessive pattern, like eye color,” says Grotevant. “Many genes contribute, and we do not yet know what they all are.”

So what’s an adoptive parent supposed to make of this information?

It can be useful for parents to know about their children’s biological heritage, to be on the lookout for genetic conditions, like depression, learning disabilities, and heart disease. But, of course, that’s not always possible. Parents may have unreliable information, or no information at all, about their children’s first parents. The best thing parents can do is to be careful observers, and to be alert to early warning signs of such conditions.

When it comes to personality traits, “biology gives us starting points and tendencies, but those are modified from the very beginning by the environment,” says Grotevant. We may parent our children differently based on their personalities — but those personalities are shaped both by genetics and environment.

We await further research to provide answers to the many lingering questions about the role of genetics in personality. In the meantime, though, what we know does help us to put parenting in perspective. “The way you parent has an impact on your child, but part of the way you parent is determined by your child,” says Neiderhiser. “It’s not your fault if things go wrong, nor do you get all the credit if things go right.”