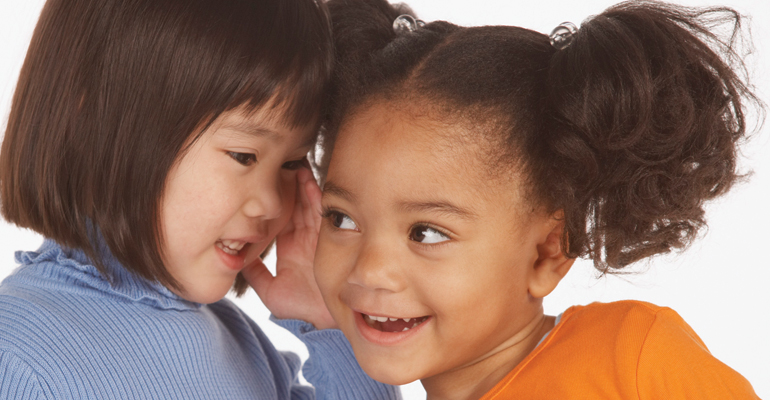 Preschoolers see the world through a lens uniquely colored with reality and make-believe. Some of their fantasies are fun and exciting, while others represent real fears. When my son, Nick, was four, he told my neighbor that his birth mother had been shot, and that was why he was adopted. I asked Nick about the story and let him know that his birth mother had not been shot. He asked, “How did she die, then?” I said she was still alive. He said, “OK,” and ran off to play. Nick had heard his adoption story hundreds of times before, and he had visited his foster family several times. Yet he told a story that was far from reality.

Between the ages of three and five, our kids minds develop at a rapid pace, which can lead to a new kind of thinking. For example, preschoolers:

1. Want to feel in control. They need to know everything that is going on, even knowing something they really don’t. Can’t make sense of a story? No problem — just fill in the holes with make-believe. A child who knows he was adopted but lacks the details might make up his own story. That’s why its important to tell your child what you know about his adoption story, again and again, from an early age. Be brief, but include concrete details. Giving him time to ask questions will help him feel like he’s still in control.

2. Have their own lines of logic that grownups often can’t understand. Instead of arguing against a whopper, say, “That is one way of looking at it,” or “That would be nice if…” Let your child feel validated while keeping the door open for learning.

3. Are in the throes of learning social norms and guidelines. They like the predictability that rules give them. If their real stories don’t match those of their peers, they may invent stories that make them fit. A preschooler watching a friend’s mother progress through a pregnancy may tell everyone that his adopted sister came out of his mommy’s tummy. You might clarify that there are many different ways to form a family, and say, “That’s true for some families, but for our family, this happened…”

4. Love to show off. While they want to fit in, they also want to be special. They want their stories to be fabulous, and they want to be the hero. To do this, they will sprinkle make-believe over even the most well-known story. Preschoolers will often move themselves to the forefront of a story, declaring, “I chose my mom and dad” or “I told my birth mom I didn’t want to live with her anymore, so I got a new mom and dad.”

Preschoolers stories may change over time. They may be fabulous one day, concrete and factual the next. Their thoughts, fears, and concerns will be expressed — through play, stories, and behaviors.

<
Previous:
Ask AF: A More Multicultural Neighborhood
Next:
>
"What We Wish We Had Known"
Authors
JoAnne Solchany, Ph.D.