Brazil: The Autoridade Central Administrativa Federal of the Secretaria de Direitos Humanos (ACAF) has authorized the following adoption service providers (ASPs) to provide services in Brazil: Lutheran Social Service of Minnesota, Lifeline Children’s Services, Hand in Hand International Adoptions, and Across the World Adoptions. Prospective adoptive parents (PAPs) matched as of April 30, 2015 can proceed without working with one of these agencies.

Colombia: Authorization for three ASPs have expired: Adoption Avenues, Grace International Adoption Agency, and La Vida International. PAPs who are in the process of adopting with these agencies should contact the Instituto Colombiano de Bienestar Familiar (ICBF) in writing to continue the adoption with another accredited provider.

Democratic Republic of the Congo (DRC): The U.S. Department of State recommends against new adoption referrals in the DRC because upcoming changes to legislation may suspend or invalidate future adoption decrees. The U.S. government continues to work with the DRC to gain exit permits for children with finalized adoptions.

Ethiopia: The Tigray region and Southern Nations, Nationalities, and People’s Regions (SNNPR) will no longer approve placement of children for intercounty adoption. Several other regions, including Addis Ababa, Amhara, Dire Dawa, Harar, and Oromia, have banned relinquishment of children for adoption.

Haiti: The Haitian central adoption authority has announced that there are significant delays in processing time for adoptions as the country works to implement Hague Adoption Convention standards. Haiti will process transition cases until April 1, 2016.

India: The Central Adoption Resource Authority (CARA) of India issued a reminder for all PAPs still interested in pursuing adoption to upload specific documents through CARA’s online database. The goal is to rank waiting parents by seniority for referrals.

Kenya: Kenya has placed a moratorium on all intercountry adoptions. Cases that were discussed by the National Adoption Committee before November 28, 2014 will continue to be processed. However, there is currently no Hague-compliant Central Adoption Authority in the country. The U.S. Department of State is investigating the impact this has for “pipeline” adoptions.

South Africa: Beginning June 1, 2015, all adopted children must obtain amended and unabridged birth certificates that indicate the adoptive parent before leaving South Africa. This process can take over a year.

Vietnam: The Ministry of Justice, Vietnam’s central adoption authority, has authorized a third service provider, Alliance for Children, to facilitate adoptions of children with special needs, aged five and older, and in biological sibling groups under the Hague Convention Special Adoption Program.

Given email address is already subscribed, thank you!
Oops. Something went wrong. Please try again later.
Please provide a valid email address.
Thank you for subscribing to the Adoptive Families newsletter. You will receive your first email within the next week.
Please complete the CAPTCHA.
Please fill in the required fields.
<
Previous:
Keeping an Adoption Open Despite Challenges
Next:
>
“Dear Mom of an Adopted Child”
Sharing
Authors
Editorial Team 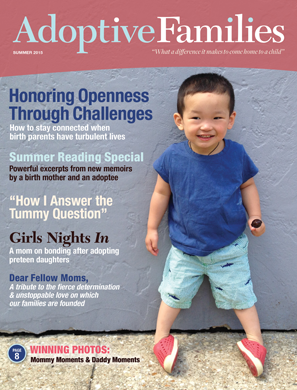 MORE FROM THE SUMMER 2015 ISSUE

Thanks To Our Sponsors

How to Be an Anti-Racist Adoptive Parent

Mothering Children of Color Who Are Becoming Adults