Tony Hynes, an African-American teenager, was walking home from a troubling encounter with county police officers, trying to decide whether to tell his white, adoptive mother what had happened. He didn’t want her to worry, but decided to tell her anyway.

The teen had been shooting baskets alone when a white officer approached.

“How long have you been here?”

“Don’t you think that’s a little bit of a coincidence?” the officer asked.

“No,” Hynes replied. “A lot of people have Michael Vick jerseys.”

Thinking the teen was “getting smart” with him, the officer asked Hynes where he lived.

“I live just down the street.”

The officer slapped the ball out of Hynes’s hands, punted it across a field, and drew his weapon.

In a flash, Hynes was face-down on the ground, a gun aimed at his back. He lay there, frozen, as the officer called his new suspect into the station.

“I was scared,” he said years later. “I didn’t know if I twitched or moved whether I would be shot. I ... tried to stay as still as humanly possible.”

Fifteen minutes later, the officer realized he had the wrong kid. He holstered his weapon and retrieved the basketball for Hynes.

When Hynes told his mother, Janet Simons, what had happened, she was angry and scared.

“It really bothered me that in the community that we live in, which is very diverse, that this would happen,” she said.

She decided immediately to drive to the county police station to speak with the officers.

Like Simons, white parents who adopt transracially will confront discrimination or racism faced by their children.

Hynes, now 27, works with the Maryland agency Adoptions Together, where he helps run a support group for parents with adopted children of a different race or culture. When incidents of discrimination or injustice arise, he counsels parents to respond in the same way that his mother did—by speaking up.

“Use your privilege to make a change,” he says.

Adopting a Child of Another Race

Choosing to adopt a child of a different race should be a very conscious decision, said Janice Goldwater, founder and executive director of Adoptions Together. Parents will need to be intentional about embracing opportunities and challenges that are associated with raising a child of another race.

“The first thing adults need to think about is what it will mean to be a conspicuous family,” Goldwater said. “Am I somebody who wants to walk through the world not being noticed? Because when you are an adoptive family, particularly a transracially adopted family, it’s all eyes on you all the time.”

The process is self-reflective, she said. Parents will need to look at the community, the school, or the church that they are bringing a child into and decide whether it’s a healthy environment that will enable him to grow and to develop a strong sense of racial identity.

Creating a diverse environment that allows children to interact with potential role models who look like them is critical for children as they develop a sense of self-esteem and self-worth, said Thema Bryant-Davis, Ph.D., a professor with [email protected], Pepperdine University’s online Master of Arts in Clinical Psychology with an Emphasis in Marriage and Family Therapy (MFT) program.

“If they are living in an environment where everyone who is in leadership and has power and authority doesn’t look like them, where the school curriculum is presenting great minds, great scientists, great inventors and it never represents someone from their background, that’s giving them a message … that [their] community and [their] people have done nothing of worth,” Bryant-Davis said.

Bryant-Davis said she believes children need to develop their own positive relationships with people of their race, see their parents interacting with people of their race as peers, and learn about the legacy of people who look like them and who have contributed to the country in great ways. She also warned against trying to raise your child to be colorblind.

“In order to truly love and affirm a child, you want to let them know that you see and celebrate every aspect of them,” she said. “You don’t want their introduction to their identity to be something negative outside of the house when you should have prepared them with a foundation of a positive understanding of who they are.”

While Hynes is hesitant to label what happened to him as traumatic, it has permanently changed his life.

“I will remember all of the details of that story because it is so important to me,” he said. “It’s a reminder to me that I always have to be vigilant and aware of my surroundings. I always have to be aware of what I’m wearing and what I’m doing, even though I was engaging in a recreational activity.”

For other children of color, an incident like Hynes experienced can result in racial trauma—a feeling of fear, hopelessness, or powerlessness that results from an act targeted at a person or group of people based on their race. Traumas can be the result of explicit discrimination or the cumulative effects of smaller slights called microaggressions.

People of color, and especially young people, can become overwhelmed by traumatic events, interactions, and experiences such as seeing videos of black men being killed by police. Young people may be more likely to internalize these incidents, resulting in self-blame or shame, Bryant-Davis said.

Addressing race and incidents of racism or discrimination can be challenging for adoptive parents.

“If you are a white person and you haven’t experienced what your child has experienced, saying ‘I know how you feel’ is wrong,” Goldwater said.

Bryant-Davis agreed, noting that while a white parent may be able to feel grief or feel brokenhearted about incidents that cause racial trauma, the difference is that they do not feel vulnerable or targeted. Being able to honestly acknowledge that you, as a parent, cannot understand the incident in the same way, while also showing compassion, will encourage children and teens to openly discuss these incidents when they do occur, she said.

“Your anxious engagement is more valuable than your silent comfort,” Bryant-Davis said. “If these issues are happening—and they are—and you don’t speak about them, your silence communicates to your child that you don’t think they’re important or you don’t care.”

Simons, for example, knew she had to act on behalf of her son. After waiting until someone agreed to meet with her at the police station, she was escorted into a conference room where she met with a number of police officers. The officers continued to be dismissive of the incident, but she persevered.

What Can Parents Do?

In order to lay the foundation for productive discussions about incidents of racial trauma, Bryant-Davis encourages parents to educate themselves about race. She advises parents to read books, articles, and blogs from authors who represent various communities of color and cultures, consume news sources that have diverse staffs who can provide varied perspectives on current events, and seek out diverse friendships with people who will be able to share their experiences with issues of race and who can potentially share their perspectives with a child.

Hynes said it’s important for parents to remember that they can still be valuable resources when it comes to educating their children about race and supporting them through incidents of racial trauma, even if they are not the same race as their child.

“In life, when I feel discriminated against, that’s when I want to feel that I have a parent to support me,” he said.

5 Ways to Support Your Child Through Racial Trauma

From the December 2017 Issue 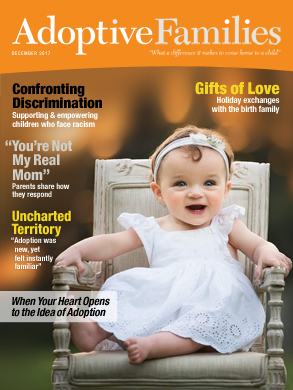 "This photo captures our daughter's happy, smiley personality, her two new teeth, and her cute two-tooth grin! It also captures her baby feet, which I kiss all day long. She is the sweetest baby girl!" —CARRIE