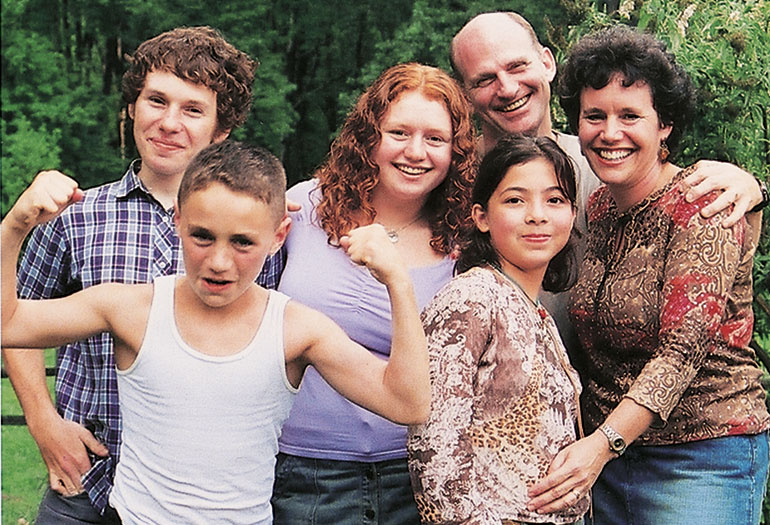 Even so, we found little encouragement at first from friends and family, who generally thought we were nuts to adopt another child — adopt an older child, at that. They reminded us that we had three great children, busy careers, and a loving marriage.

With our oldest heading off to college and our youngest in middle school, we finally had some breathing space again. But our desire to reach out and love another child prevailed over their warnings.

Even though we were well-prepared, there were challenges — and even steeper challenges for Elyana. There was palpable tension between our vision of a loving relationship with our daughter and the persistent shadow of her unhappy life before she came to us. We discovered we were parenting a child who was terrified of love.

During those first trying and rewarding months of being Elyana’s parents, we came to know ourselves in a new way. I discovered the depth of my patience, that I could learn to parent in a completely different style, and that I could give love without immediately receiving it in return.

I also learned to let go of the indignation I’d felt when friends warned us against adopting — and to accept support from these friends as we struggled to settle Elyana into our family.

Elyana’s behavior echoed the ill treatment of her early childhood. During her violent outbursts, it was hard to see anything but an angry child who might never love us. We feared that those moments would jeopardize the bond we had with our other children as well as the possibility of bonding with our new daughter.

Dealing with these trials together has truly made us a new family. Our adoption story is punctuated with lessons Elyana helped us learn. Among them are:

When the going gets tough, get help quickly. Don’t deny that there is a problem or trust that things will get better on their own. We began therapy in the second week Elyana was home and took advantage of as many support services as we could schedule. We knew that, for treatment to be successful, both my husband and I had to be involved.

Get the right kind of help. Traditional psychotherapy may not be effective with children who have experienced trauma and loss, who need to learn how to trust and to relate in new ways. Working with a therapist who understands the attachment cycle has taught us how to meet Elyana’s needs.

We learned that a child who is shut down emotionally has nothing to “work for” in therapy. To give her incentive, we rewarded her with a trip to the store to purchase a toy after each therapy session. Before this, I would have thought it inappropriate to “buy” a child’s interest in healing, but it has worked in our situation. And now that Elyana is coming to know what it is like to feel love, the things we buy are less significant.

Don’t lose sight of the ways in which this is affecting your other children. One day Elyana asked me why I wanted to adopt her, and in no uncertain terms I told her that I wanted a daughter. Later that night, my 17-year-old daughter came to me in tears and told me that she was deeply hurt. She had heard that conversation and wondered if she was not “enough” of a daughter. I explained that it was my love for her that gave me the confidence I needed to be Elyana’s mother.

Find support networks. I joined a support group online and spent many evenings exchanging ideas with other parents who shared my concerns. On difficult days, it was that group that kept me feeling “normal.” I also read a wonderful book about a family who adopted a child similar to mine. Knowing about their journey gave me hope that things would get better.

Give yourself time out. Many of us feel guilty about looking after ourselves during the times when our children need so much from us. My husband and I have learned how important it is — to the whole family — for us to take care of us. At a particularly trying time, I received and initially declined an invitation to a weekend professional conference. A colleague graciously offered to care for my children and encouraged us to go. My husband joined me for a weekend away, and that gave us the distance we needed to gain a fresh perspective on our situation.

Hold on to your sense of humor. For the first seven months, Elyana often focused her anger on certain of our physical characteristics. She referred to her father as “Bald Head.” When she was mad at me, she would call me “Big Breast.” We had to laugh, and even took to referring to each other fondly as Big Breast and Bald Head on occasion.

With help, we learned that Elyana’s fears — and our own — had to be confronted. We learned that we were not alone, that other children and other parents had similar challenges. Most importantly, we saw that with time, therapy, support from friends and professionals, and lots of love, she could heal.

A few months ago, I was looking for a poem to use on the card that would announce the finalization of Elyana’s adoption. The poem emerged not from my bookshelf, but from Elyana herself. So, with great joy and full hearts, we allowed Elyana to proclaim her official status as part of our family. She wrote:

When I was little, Little as you, I had a dream I thought would never come true.

I dreamed of a family that would fill up my heart with love. Then my dream came true.

Now, what should I do? Should I love them back?

Of course I will.

First my heart said never, But now we are a family forever.

<
Previous:
When Your Child Has Birth Siblings
Next:
>
"Writing Through the Wait"
Authors
Janice Goldwater