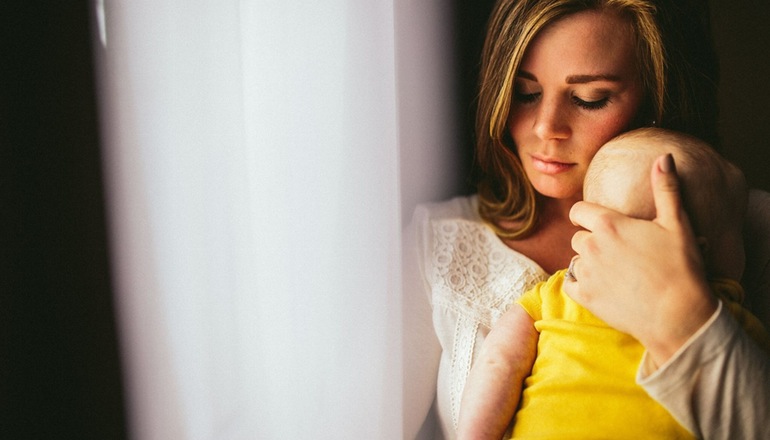 Leo was born in an ambulance. He weighed four pounds and was addicted to crack. His biological mother left him at the hospital. Leo spent much of his infancy shaking from withdrawal.

About the same time, in early 1998, Gina Horton, now 48, who raised one son and had herself been in foster care as a child, read a newspaper article about a baby who had been beaten to death by a foster mother. She was horrified. She had been thinking of adopting a baby.

The story compelled her to make a decision.

Ms. Horton, a self-employed party planner, combed through the yellow pages, calling social service and adoption agencies until she reached the Jewish Child Care Association, a beneficiary of the UJA-Federation of New York. Sarah Wolfe, a caseworker at Jewish Child Care, told her about Leo, explaining that he would need special attention and encouragement.

It was a happy day for Ms. Horton, but it was also the beginning of many problems. “Leo stopped taking a bottle at eight months,” she said. He had trouble sucking and could not drink milk. Leo showed signs of being seriously developmentally delayed, which often happens with children born to crack users, Ms. Wolfe said.

But after he turned two, Leo’s problems became more severe. He could not make eye contact, or respond when called.

Around that time, Ms. Horton started training Leo to use the toilet. It took him a year to learn. Ms. Horton, who had not officially adopted Leo yet, knew that something was not right, and she took him to see a neurologist. “He said, ‘You know, your son has autistic tendencies,’ and I was floored,” Ms. Horton recalled. “He said it very casually, like I just knew it.”

Ms. Horton researched autism on the Internet, in magazines and books. “I had to do something but I didn’t know what to do,” she said. “I went to the agency and I said, ‘Listen, if you don’t help me, I won’t adopt this child. I don’t know how to raise this child. You need to teach me.'”

Sharon Goldstein, the administrative supervisor for Jewish Child Cares foster home services, and Ms. Wolfe listened to her concerns. This presented a whole new reality for her, Ms. Wolfe said. She referred Ms. Horton to Jay Goldwein, a behavior therapist. In her research, Ms. Horton had read about applied behavior analysis and she immediately agreed. Ms. Wolfe and Mrs. Goldstein secured $1,000 from The New York Times‘s Neediest Cases Fund for 10 therapy sessions for Leo, who was three.

Mr. Goldwein helped Ms. Horton learn behavioral techniques to manage the daily problems she faced with Leo. Leo would echo words, but could not ask for a glass of juice. He would throw tantrums, but could not communicate with anyone. Mr. Goldwein used positive reinforcement to reward Leo when he took a step closer. He used Leo’s echolalia, a parroting of words, as a tool to teach Leo how to phrase his words.

“You would enter the room and Leo might or might not have taken notice,” Mr. Goldwein said. “He might not even look at you.” After an initial 10 hours of therapy, Ms. Horton paid on her own for five hours a week with Mr. Goldwein until her local school district on the Upper West Side agreed to pay for that counseling, back at 10 hours a week. “A lot of people didn’t believe,” Ms. Horton said. “But I believe in my child. And Jay believed.”

Ms. Horton officially adopted Leo on March 29. Leo, now four, is in a regular preschool that he could not have attended before because of his learning delay. “He’s a different child,” Ms. Horton said. “He’ll bring his clothes in to me in the morning and say ‘Get dressed, Momma, school.’ He knows about Santa this year, and you know how many times I put cookies out there and he wouldn’t know. Every holiday went by and he had no clue. It was heartbreaking.”

“I couldn’t have done this without Jay,” Ms. Horton said. “I want other mothers to know that there’s hope for these children.” In the living room of their home last week, Leo played with an electronic keyboard. He chose different songs and then danced to them. “Leo, where did you go yesterday with Momma?” Ms. Horton said.

“And what did you see at the circus?”

“I love you,” Leo whispered.