Lion, currently in theaters, is one of the most relevant, and most responsible, films about adoption that I’ve screened. Please read on for a review following the format of the reviews I post on my site, adoptionatthemovies.com, with a plot summary and adoption connection, strong points, challenges, recommendations, and questions to spark discussion after viewing.

Please note, there are SPOILERS throughout this review. If you want to avoid spoilers, here’s what you need to know: If you’re an adoptive parent, you should see this movie. It’s based on the real-life Saroo Brierley’s memoir, A Long Way Home, and offers a powerful and healthy portrayal of search and reunion. It will not be a good choice for young kids to see, but it might be helpful for teens to know that a quest like the main character’s is fine with you. In short, Lion is one of the best adoption-related films I’ve seen.

Young Saroo [Sunny Pawar] lives in a small village in India. He tags along with his brother, Guddu [Abhishek Bharate], one day after the older boy was offered work. Guddu tells Saroo to stay put, that he will come back for him, and leaves him sleeping on a train station bench.

Saroo awakes, and Guddu is nowhere to be found. The five-year-old boards a train, hoping to return home, but instead is taken over a thousand miles away to the city of Calcutta. He screams out for help as the train carries him far from his home, but onlookers simply look away.

When he disembarks in the busy train station, Saroo can’t even begin to ask for help because he speaks Hindi, while those in Calcutta speak Bengali. After spending several months on the dangerous streets of the big city, someone eventually helps Saroo identify himself as a missing person. But, because he doesn’t know his mother’s name (he’s only ever called her “Mum”) or the name or location of his hometown, the well-meaning authorities are unable to reunite the young boy with his family and he is taken to an orphanage.

At the orphanage, a social worker tells Saroo that, despite their efforts, they were not able to locate his family. She speaks to him about adoption and tells him that a family in Tasmania, Australia wants to adopt him.

Saroo travels to Tasmania and meets his new parents, the Brierleys [David Wenham and Nicole Kidman, who is an adoptive mother of two young adults]. They’re happy to see him, they understand that he has come a long way and that the road has been difficult. Mrs. Brierley expresses that she wants to know all about Saroo’s past, and promises that she’ll always listen. A year later, the Brierleys adopt a second child, Mantosh [Keshav Jadhav]. Mantosh has some destructive behaviors, but the Brierleys embrace him and he becomes part of their family. The Brierleys did not have infertility issues and have always hated when people assumed that they adopted because they were not able to conceive. They explain, “having a child might not make the world better, but taking a child who is suffering and giving them a chance” is better. 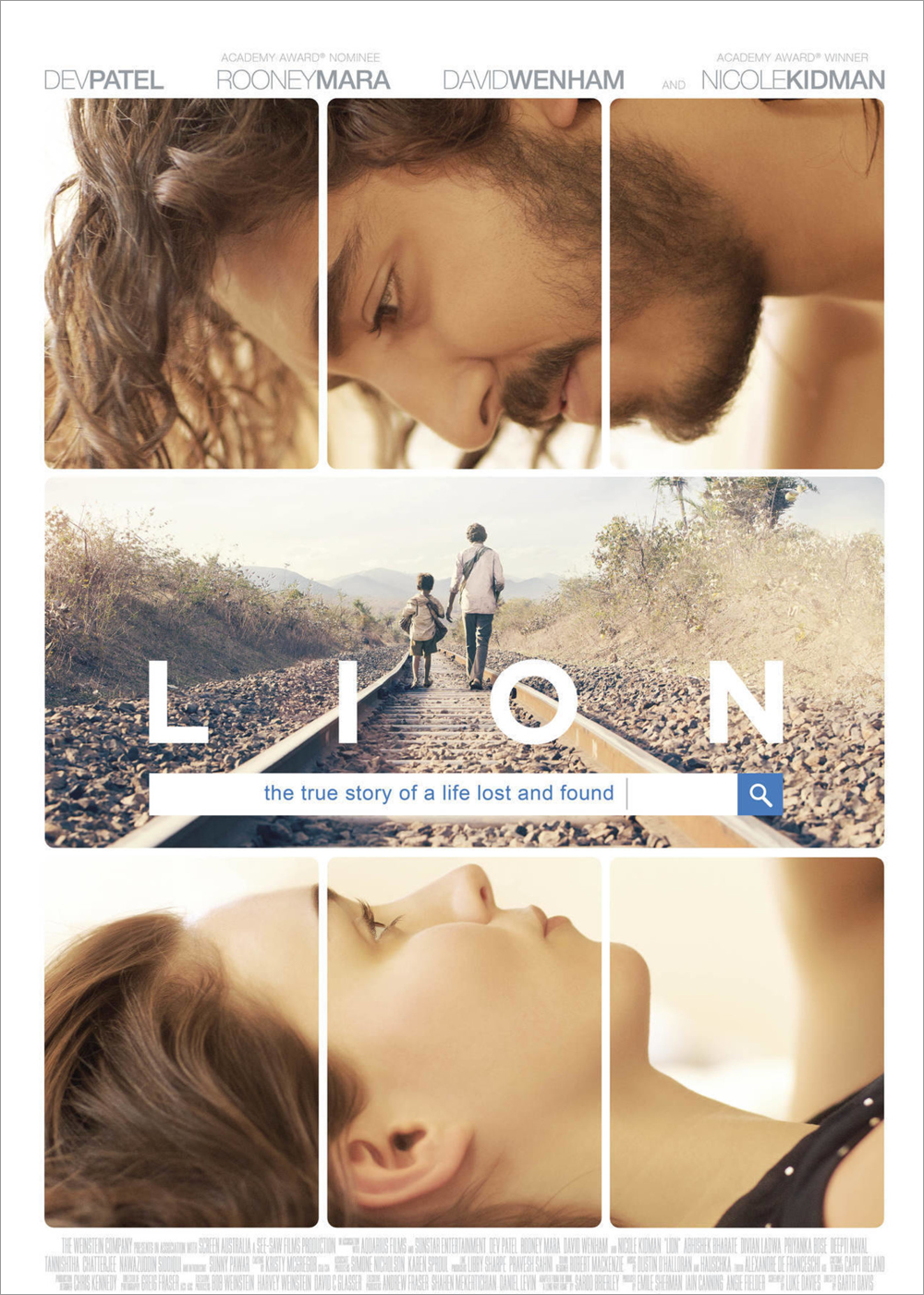 Twenty years later, Saroo [Dev Patel] is pursuing a career in hotel management. When his classmates learn that he was born in India, they ask him where he is from. This makes Saroo pause; he says, “I’m adopted, I’m not really Indian.” Later, the sight of a familiar treat from his childhood draws him back into his past. He confides to a friend, “I’m not from Calcutta. I’m lost.” Saroo begins to share his story with his friends, who understand it to different degrees. He begins to realize that his mother would not have been able to search for him easily because she cannot read. He believes that his mother and brother have likely always been looking for him, and becomes driven to find them as he imagines the emotional anguish they must have felt since he was lost. His search puts strain on his friendships and, to some extent, on his relationship with Mantosh [Divian Ladwa]. Saroo’s adoptive parents never express reservations about his desire to find his birth family; they are consistently loving and supportive.

Saroo taps into his memory and uses Google Earth to help him pinpoint the town he was from as a child. It amazed me that this information was both in his mind and photographed on Google Earth, and he was able to connect his knowledge to the technology. After locating his hometown, Saroo goes there. The streets are familiar to him. He finds his mother and sister, and they embrace him gladly.

Saroo’s birth mother, Kamla [Priyanka Bose], understands that his adoptive parents are his family, but she is overjoyed to see him again. She has never stopped hoping for his return. Saroo’s adoptive parents embrace his birth mother as part of Saroo’s life, and Saroo expresses that finding her has answered his questions.

As the film ends, Saroo calls his adoptive parents. His words are perfect, “Hi Mom. I’m safe, and the questions have been answered. There are no more dead ends. I found my mother. She thanks you for raising me, and knows you’re my family. I found her, but it doesn’t change who you are. I love you, Mom and Dad, so much, and Mantosh.”

I love that Lion genuinely shows Saroo’s backstory. Saroo tells his adoptive parents, “You adopted our past, too.” It’s a sad truth that the backstories of many children adopted internationally are lost or unknown. Lion is a strong statement that, even if a story has been forgotten, it is still there to be uncovered, and people may be waiting to be discovered.

Lion portrays search and reunion in adoption in a healthy, responsible way. Saroo’s family consistently supports his acceptance of his history. They support his desire to find his birth family, and rejoice when he finds them. Saroo’s birth mother has always waited for Saroo to return, yet she also fully accepts that Saroo’s adoptive parents are his family. For Saroo, finding his birth family fills gaps in his life story but does not replace his adoptive family’s role.

Saroo does not give up when well-meaning friends tell him that he needs to accept that his birth family is lost forever. He keeps looking. His character is given room and grace to experience the range of emotions and thoughts that accompany his journey. At one point, he implies that his adoptive family is not his “real” family, but he ultimately realizes that his birth family and his adoptive family are both his real family.

Saroo’s desire to search was primarily spurred by his empathy for the grief he imagined they felt at losing him. He expresses his need “to find them and let them know I’m OK.” Saroo hides his search from his adoptive parents for some time, explaining, “I didn’t want you to feel I was ungrateful.” His adoptive mother tells Saroo that she truly hopes he finds his birth mother, because “she needs to see how beautiful you are.”

Saroo is always trying to do well by those in his life.

The film captures how Saroo’s long-ignored past is still present in his dreams and memories.

A child is unexpectedly hit by a vehicle. At the orphanage, we see children punished harshly. There are some sad elements to the story, which is not geared towards younger kids. That said, it’s absolutely worth seeing for adults interested in or touched by adoption.

Lion is beautiful, powerful, engaging, honest, and responsible in its portrayal of the process and emotions involved in adoption search and reunion for adopted people and those who love them. This film is geared towards adults and perhaps some teens, and should be in adoptive families’ libraries. This gets Adoption at the Movies’ highest recommendation.

Addison Cooper, LCSW, is a licensed clinical social worker and a therapist with a focus on foster care and adoption. He reviews movies and books with adoption themes at AdoptionAtTheMovies.com. His new book, Adoption at the Movies, comes out January 19, 2017 from Jessica Kingsley Publishers.

<
Previous:
How Did You Prepare Your First Child for a Sibling?
Authors
Addison Cooper, LCSW