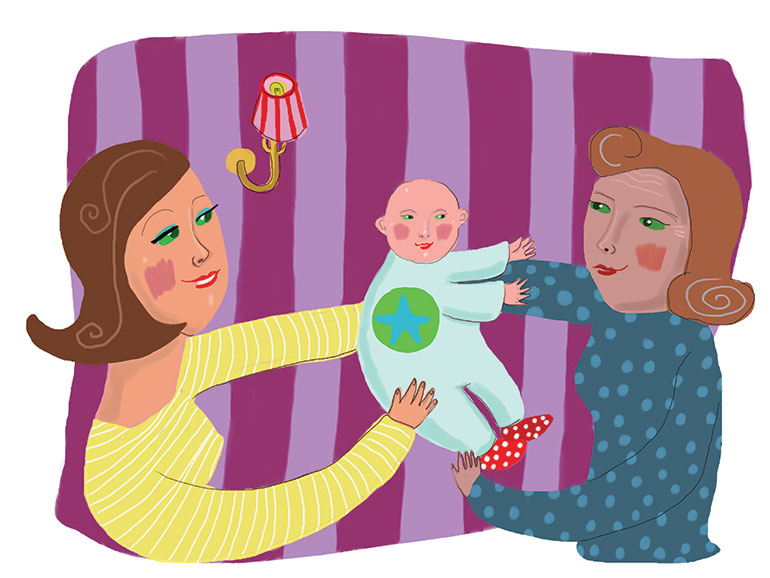 Best friends Diane Bueller and Debbi Stone have a unique relationship. Not because the two women are nine years apart in age, but because Stone is the birth mother of Bueller’s son, Danny.

When that fact elicits surprise or even skepticism, here’s what Danny has to say: “It’s always seemed perfectly normal to me.” He adds, “I have more people in my life who love me than most people do. I don’t see how that can be a bad thing.”

This is exactly the kind of sentiment that drove the shift toward openness decades ago, when sealed adoptions were still the norm. Bueller and Stone’s close friendship, of course, is an exception to the rule. Experts say that less than 10 percent of families in open adoption become friends, or even meet in person frequently. But they don’t need to, to forge a connection that will bring lasting benefits to the child.

And as the number of families with varying levels of open-adoption contact continues to grow — and evidence in support of removing the secrecy and shame of adoption continues to mount — there’s also a greater understanding about how to make the relationships work.

Starting off on the right foot

When future adoptive or birth parents visit family therapist Brenda Romanchik at Insight: Open Adoption Resources and Support, in Royal Oak, Michigan, she gives them a questionnaire she developed, called “Exploring Your Family Culture.” Do you value homemade gifts? Do you laugh out loud at movies? Do you talk with your own parents once a day, once a week — or is once a month too much?

It’s not that the individual traits and idiosyncrasies of prospective families must match, item for item. Romanchik just wants to get people thinking about what makes relationships work, in general, and what they are looking for from this relationship, in particular.

Joyce Maguire Pavao, founder of the Center for Family Connections in Cambridge, Massachusetts, and author of The Family of Adoption (Beacon), has developed what she calls, “Brief Long-term Therapy.” Once a year, birth parents and adoptive families come in together to talk, no matter what. “Like a 50,000-mile check-up,” she says.

After all, “it’s unrealistic to think there won’t be bumps in the road,” says Pavao. “Think in-laws. You marry your partner, you get stuck with the in-laws. Some you love, some you put up with, but you do it because you love your partner. When you’re an adoptive parent, you do it because your child’s self-esteem and identity are built on knowing both of his families.”

Michelle and Brett B., of upstate New York, get that. Their daughter is only seven months old, but they know that “she will grow up and have questions and needs.” That’s why they remain committed to the open relationship, which Michelle doesn’t always find easy. “I second-guess myself constantly,” she says. “Do I call the birth mother and tell her my daughter cut her first tooth? That she’s sleeping through the night? What if she sees what an easy baby she is and wants her back? We know that can’t happen, but we still worry.”

Their relationship is still in its early stages, Michelle admits. “When she visited last Christmas, it was as if my girlfriend were here, sitting on the couch, chatting, playing with my baby. It made me see that it could grow.”

When Bueller brought home her baby, in the early 1980s, it was a closed adoption, typical of the times. But when Danny was five, Bueller had an unexpected call from the agency. His birth mother was seeking information.

Stone picks up the story: “I was married and raising my first daughter, and I realized how fragile life can be. I needed to know the child I placed for adoption was alive and loved.” To her surprise, Bueller responded with a packet of photos and a letter. “Her opening line — I never wanted this to be a closed adoption — left me speechless,” says Stone.

In another amazing turn of events, Stone had just moved to Hutchinson, Kansas, where Bueller lived. At Bueller’s suggestion, the two women met alone a few times before Danny was introduced to his birth mother. Those private lunches set the foundation for a friendship that continued to grow, separate from their relationships with Danny. “Its because of Danny that we met, but we could have been friends under any circumstances,” says Bueller.

Kelly and Eric Cockshaw, of eastern Pennsylvania, are only three years into their open adoption, but they’ve already seen how terms can change. When they adopted their son, they wanted to communicate solely through the agency. Not long ago, they changed their minds.

“It became too cumbersome,” says Kelly. “We called the agency and said, We want to take you out of this. That’s not something I could have imagined doing two years ago.” Now the families call and e-mail each other directly, and Kelly’s been rethinking her original request for contact but no involvement: “If my sons birth mother wanted to see him, I’m almost sure we would be OK with it.”

Adoption attorney Gregory Franklin, of Rochester, New York, guides his clients to anticipate such possibilities. He works with both families involved in an open adoption to establish terms for correspondence, calls, and visits. When writing up the actual contract, he typically advises families to include a statement such as: “The parties understand that their needs and expectations may evolve, and that they will work together to arrive at the best arrangements over time.”

In some open adoptions, extended family, rather than birth parents, are the primary point of contact. Teri and Howard Henick, of Hamlin, New York, have met their four-year-old daughters birth mother only once.

Since that brief meeting, Gabi’s birth mother has failed to show up for several other get-togethers they’ve planned. Each time, Teri feels crushed, and worries that one day she will have to tell her daughter that her birth mother chose not to know her. What Teri hadn’t anticipated, and feels blessed by, is the fully open relationship her family enjoys with Gabi’s birth grandmother, Kathy.

“Kathy always tells us how lucky she is that we keep in touch, but it’s so the opposite,” says Teri. “When we decided to adopt again, she was one of the first people I called. She’s that important to us. She’s family.”

Welcoming this extended family, however, has led to some complications within her own. Teri’s own parents and in-laws have been a source of disappointment. “They’re old-school, and want nothing to do with the birth family,” she says. And though Gabi has met several of her birth siblings, “she gets confused and calls them her cousins.” When she’s older, Teri says, they’ll explain the difference.

Danny Bueller, as well, has benefited from many familial relationships. Danny and his birth sisters attended the same elementary school, sometimes had friends in common, and went to each other’s birthday parties. “I absolutely love Rick,” he says of Stones husband.

Despite the families closeness, Diane has never felt threatened or resentful. “Debbi didn’t try to be Danny’s parent, she didn’t second-guess me. She was more like an aunt.”

Problems are most likely to arise when people don’t communicate, says Franklin, so his contracts stipulate a mediator each party can call. He typically handles 60 adoptions a year, and says the need for mediation rarely arises. Raising the possibility, however, hammers home a make-or-break point: No issue should fester, not even a small one.

Gift-giving, for example, can lead to sticky situations. This often happens because the topic tends to get left out of contact agreements. So birth parents may exceed boundaries, reaching beyond their means to send expensive gifts. “Extravagance is a way for them to show love,” says Romanchik. That’s why, no matter how awkward it might feel, you “have to talk about this stuff,” she says. “Be really specific. And then, if there are problems later on, you can gently remind them, We talked about this before.”

If an undesired gift is received — a toy gun, for example — Schooler’s advice is to say, “In our family, we don’t give violent toys, so we’re not accepting that toy gun. Can you send a different gift?” Once a gift has been deemed inappropriate, let the sender know that you will pre-open packages in the future.

Since opening direct communication with their sons birth mother, the Cockshaws have developed a wonderful relationship with her. Still, says Kelly, “I found myself feeling nervous the day I called to tell her that we were, shockingly and unexpectedly, pregnant. I worried that she’d be angry, that she’d chosen us to be her son’s parents, thinking we were unable to have a biological child.” Many parents have similar fears when breaking news about a divorce, a move, or the loss of a parent’s job to the birth parents. And many, like Kelly, find that their revelation is met with empathy and understanding. As Kelly says, “I shouldn’t have doubted her. She was thrilled for us, and she often checks in to see how both our boys are doing.”

Looking back, Bueller and Stone recall only one difficult time, when Bueller announced she was divorcing. Stone says, “One of the reasons I placed Danny was because I knew that my relationship with his birth father wasn’t going to work out. So when Diane told me she was divorcing, the thought flashed through my mind, I could have raised him! But as quickly as it came in, it went out.” Bueller remembers being embarrassed to tell Stone about the divorce. “I was sorry she would be hurt. We didn’t argue over it, and we got through it, but it was a bad time.”

Now an adoption social worker, Stone uses her personal experience to inform her work. “I caution families going into open adoption: Let this relationship grow. Don’t jump in with both feet. You can’t force it by saying, C’mon over for pizza every Friday night.”

<
Previous:
"Missing My Mom as I Became a Mother"
Next:
>
The Second Time Around
Authors
Barbara Meltz