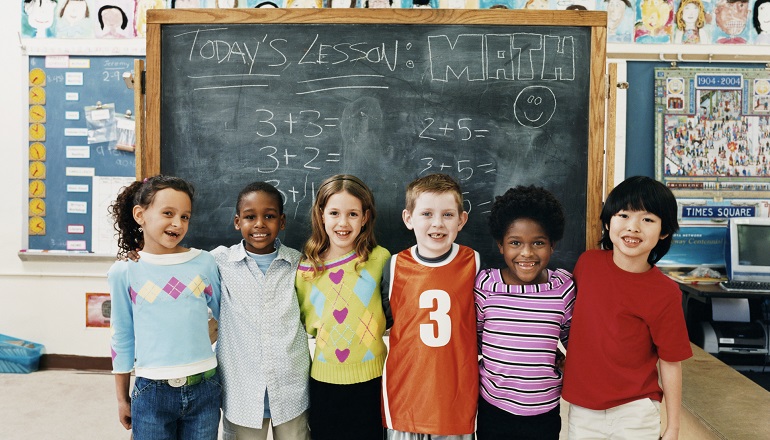 You couldn’t have avoided the back-to-school mania of the past few weeks: commercials plugging sales on new clothes, rows of notebooks at the store, and letters from your child’s school, telling her what to bring and where to catch the school bus. And for our families, there’s an extra issue to be dealt with before that bus pulls up for the first time: Should you talk to your child’s school about adoption?

For some families, the answer is obvious. Others weigh the pros and cons of getting the subject out in the open, versus letting your child bring it up in his own time. If you choose to share, will the teacher be supportive? If you don’t, how will your child handle the inevitable questions that will come his way?

If you’re unsure as to whether—or how—to broach the subject with your child’s teacher, here’s how some AF readers handled the situation when their children started school. And you’ll find sample responses to prepare your child for questions from his classmates.

As our kids grow, adoption takes a back seat to more pressing matters—sibling squabbles, soccer games, and homework, to name a few. Our families are like all others. So some parents say, why make adoption an issue now?

“We leave it up to the kids to mention adoption or not, and it has worked for us,” says Pamela, whose daughter and son are seven and eight. “Just as I don’t go to the school and point out that my children are biracial or fantastic athletes, or that their dad is a doctor, or that they are lactose intolerant, our children share information about their adoption—and other info—when it seems right to do so.”

Pamela’s biracial children do get questions from their classmates about why they don’t look like her, and her kids handle them in stride. “For us, walking into a classroom and trumpeting’ that our children were adopted would just bring undue attention to a fact of life,” she says. “Adoption is one of many wonderful things about our children’s lives, and it hasn’t gotten more or less attention than any other thing.”

As new parents, we practice saying to curious questioners, “We’re keeping details of our child’s story private for now, until she is old enough to decide whether to share.” For many parents, the decision not to talk about adoption at school comes from the wish to protect privacy.

“I followed my daughter’s lead, and chose not to make adoption an issue with school employees,” says Leona, mom of Madison. When Madison was in kindergarten, she shared her family story with her teachers, by mentioning the fact that she had a birth mom. When school projects about family history come up, Madison includes her birth and adoptive families, and Leona helps her complete the projects in a way that reflects Madison’s story.

Parents who don’t “match” their children may feel compelled to talk with the school about adoption, but Debbie Skarsten, mom of a multiracial family, lets her children decide when to share their stories. “I did not talk with the principal or teacher unless it was necessary,” she says. “I intervened only if the children asked me to. My kids have always known about their arrival in the family, and they are comfortable answering questions themselves.”

The world isn’t as accepting of adopted children as we would hope, so some parents keep their children’s adoptive status private. For Yvonne Stith, mom of Mark (five, U.S. foster care), the reason for not talking with the school was to let him choose when to share his story—but she also wonders about the response. “We don’t want him to be labeled’ or to feel he is different because he was adopted,” she says.

At the other end of the spectrum, parents are wary of a teacher who says, “It’s not a big deal.” Jenna Kern-Rugile spoke with her daughter Maya’s kindergarten teacher and was surprised by the response. “I wanted the teacher to be aware that Maya was sensitive to being different’ because she is from Guatemala. Her teacher said, Don’t worry, kids won’t say anything, they’re good kids.’ I told her that five-year-olds aren’t mean, they’re curious.”

Fear of the teacher’s reaction shouldn’t be a reason not to share, if you’re inclined to do so. While negative responses do occur, most teachers and principals are understanding. As Kern-Rugile found, speaking with the school principal solved the problem. “The principal took my concerns so seriously that she allowed a social worker who’s an expert in adoption to come to the school and do a teacher training,” she reports.

Rather than dreading the family tree project or a comment from a classmate, many parents decide to talk with the school before classes start. “We opted for a proactive approach, so that we could be prepared for possible issues,” says Cristal Lake-Sanders, mom of Joselyn (six, Guatemala). Before Joselyn started kindergarten, Lake-Sanders sent a letter to the teacher, saying that her family was built through adoption. The letter was well received, and Joselyn had no problems when she was “Star of the Week.”

In addition to preparing a child for the questions that will come his way, some parents think it’s important to educate the teacher. “I wrote a letter to our child’s teacher and enclosed a handout on positive adoption language,” says E.S., mom of two children adopted from Guatemala. “We’ve always discussed adoption like any other aspect of our family life, so I know our son has the tools to respond to inquiries from his classmates, but I want his teacher to have the proper tools as well,” she says. Download the printable handout on “Helping Classmates Understand Adoption.”

Some parents are proactive with other parents in the school, as well. Megan Quinn, mom of Isabella (six, Colombia), had been open with Isabella’s teacher about adoption, and the teacher was happy to learn about the family. But soon it became clear that more education was needed. “We heard some chit-chat among the children about Isa’s adoption story, so we took the opportunity, after a class parent meeting, to do some proactive adoption-talk,” she says. “We distributed handouts, spoke about our hopes and concerns, and welcomed questions. Overwhelmingly, people were thankful for the openness of the forum.”

Occasionally, a health condition or learning delay must be brought to the school’s attention. Stephanie, mom of Nadia (eight, Russia), e-mailed the teacher before Nadia began school. “Nadia did not learn to speak English until she was four, when we adopted her, and she has some learning difficulties because of this,” says Stephanie. By contacting the teacher early on, Stephanie felt that they had avoided tricky situations to come.

Danielle Rode spoke with the school about her son Sam’s (four, U.S.) behavioral problems. “Our son had multiple caregivers before age one, and has some attachment issues and anxiety as a result,” she says. “Without understanding how his early experiences affected his development, his behaviors appear defiant and stubborn. We have helped the school staff not to take his acting out personally.”

Parents of children with learning delays, attention deficit disorder, or other special needs should consider disclosing their child’s story to the teacher and school officials. Your child may be eligible for special services, through an IEP or 504 Plan.

Taking Pride in Their Culture

For some families, talking about adoption at school shows their affinity for the child’s birth culture. Although AF reader Sara and her daughters look alike, she wanted the school to know about Cecelia’s birth country, Azerbaijan, and about Solana’s Hispanic heritage. She wrote to their teachers in advance of the school year, and “the teachers went out of their way to read books about adoption and different ways to create families,” she reports. “In turn, I discussed the girls’ ethnic traditions with their classmates. It has been a positive experience all around.”

Sara Kleiner, mom of Lauren (four, China), also planned a classroom presentation. Lauren joined the family as a toddler and started preschool a month later, speaking only Chinese. Kleiner spoke to the director of the preschool, and arranged to come to the class to talk about Lauren’s birth country. “I told her classmates where she was born, and I showed them on a globe how far China is from the U.S. I brought in items that we bought in China, and read books about China and adoption. The students asked good questions!”

No matter what you decide, it’s a good idea to check with your child first, as one AF reader found: “When my daughter was in preschool, she asked if she could bring in cupcakes on Adoption Day. That day, I explained to the class that I had gone to China to adopt my daughter. There were other kids in her class who had been adopted, and they shared their stories, too. The next year, as Adoption Day was coming, I asked my daughter if she wanted another batch of cupcakes, and she said, ‘No way!’ as if the idea were outrageous. So listen to your child. The ‘right answer’ can change!”