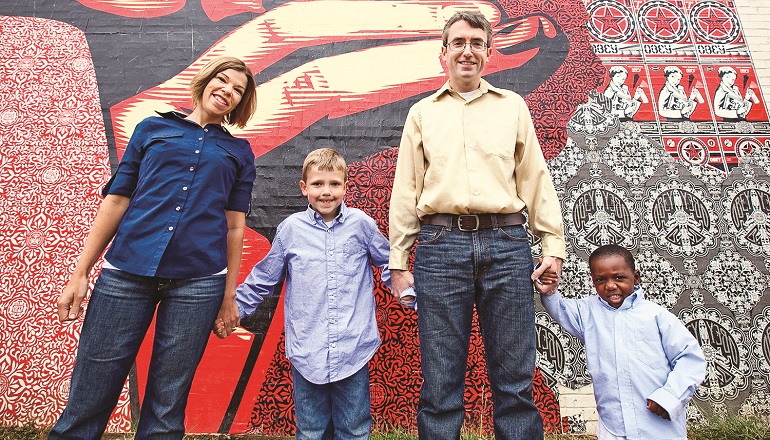 For once, the barista at Starbucks didn’t recognize me. He shouldn’t. I’m there only about once a month. The thing is, he remembers me. Well, not me so much as us. This is one of those things that come with being the white mother of a black child. Comments, questions, stares—those I expected. The strange experience of just being visible—not so much. I didn’t realize how invisible I was until I wasn’t anymore.

For our first outing as a family of four, we attended a local Harvest Festival. The park pathways were crowded with people, so Matthew and I took the lead, with my husband, David, and three-year-old Cameron trailing a few feet behind. I was filled with pride in my newborn, strapped snugly to my chest in a carrier, and noticed only the few nods and impersonal smiles I would get anywhere. When we got home, I remarked, “Wow, I think I was expecting more of a reaction. No one seemed fazed by us.” David laughed. “Sharon,” he said, “if only you could have seen it from where I was! People were tripping left and right from turning to get a look after you passed!” We had definitely been noticed.

I quickly realized that we were not just noticed, we were remembered. By my second trip to Kroger with Matthew, the cashier was greeting us like old friends. This cashier had, for years, rung up my purchases, while fair-skinned, blue-eyed Cameron sat in the cart, never once showing a glimmer of recognition. But after showing up twice with Matthew, suddenly, we were unforgettable.

Someone who recognizes us stops me nearly every day. Parents from Cameron’s school, kids from soccer class, neighbors, baggers, baristas, librarians. They all greet us with a familiar “hi!” that tells me I’m supposed to know them. (I usually don’t.) When I asked a Caucasian friend if she had ever experienced this while out with her African-American daughter, she looked startled. Ella is her only child. “I thought that’s just how people act when you have a baby!” she said. Sure, babies get attention, but brown-skinned babies with peachy-skinned mamas make heads turn. It’s a different kind of attention.

I don’t know how I feel about being so visible. It’s not good, it’s not bad. It’s not that people are staring, snickering, or whispering. It is simply a constant sense of being that I’ve never had before.

Looking at Race, Looking Within

When I tell others about our daily experience as a multiracial family, many express surprise, disbelief, or even defensiveness. “I don’t even notice color,” they say. The idea that my family is conspicuous because of our racial differences makes them uncomfortable. They mistakenly believe that to not be racist means to not see race. But ignoring Matthew’s race doesn’t impress me.

The idea of “color blindness” is unrealistic, but, worse than that, it is dismissive. It implies that his race is unmentionable, and his non-whiteness is a flaw to be overcome. Far from being admirable, color blindness suggests that racism can be solved by pretending it doesn’t exist, instead of working to overcome our own prejudices and those entrenched in our society and institutions. And why should race alone, and not other parts of our identity, be ignored? Imagine that someone expressed surprise that you were a female. “Oh!” they’d exclaim. “I’m not sexist. I don’t even notice gender!” Women shouldn’t have to lack gender to gain respect. I don’t want my gender to be ignored; I want it to be seen as one of the things that make me who I am.

No, it isn’t seeing race that makes someone racist. What makes someone racist is drawing conclusions about a person based on his race. That’s why I was offended when a shoe salesman pointed to Matthew and said, “Oh, I can just tell, he’s gonna be a linebacker!” Maybe the comment wouldn’t have bothered me if Matthew were a hefty toddler, tossing sneakers across the shoe store and tackling his brother. Aside from skin color, what made the salesman think “football” when he saw my tiny, tenth-percentile infant in his stroller, quietly paging through The Very Hungry Caterpillar?

Visible as a Starting Point

Recently, a mother at the park admired Matthew. “His skin color is so beautiful!” she said. Tears sprang to my eyes as I realized that, although I have been told how cute Matthew’s dimples are and how darling his smile is, no one has ever complimented his skin. His gorgeous, rich, deep-brown skin. I felt oddly grateful to this mother for seeing Matthew’s skin and realizing that it is beautiful and OK—no, more than OK—to say so.

So even though being so noticeable, so unrelentingly remembered, feels strange, it’s normal. Of course, people see that we don’t match. How could they not? We notice differences and, hopefully, we learn to look deeper. I want Matthew’s first-grade teacher, his best friend’s dad, and his classmates to know him as more than the black kid with the white family. There is more to me, more to Matthew, and so much more to our family than what’s visible.

<
Previous:
When Parents Adopt Out of Birth Order
Next:
>
"Finding Her Voice After Eight Years Without a First Language"
Authors
Sharon Trumpy