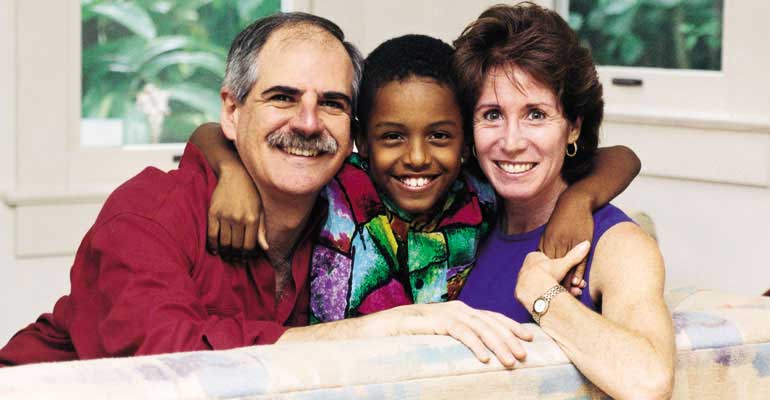 No guidelines or checklists exist for learning how to instill racial pride in a child who has been adopted transracially.

When my husband and I were first looking into adoption, we were much more focused on how to get a baby than on how to parent one. We read everything we could find about successfully adopting, and spoke to anyone we could on the subject.

When we finally became the proud adoptive parents of our son, Ari, we plunged into study once again to learn all that we could from our new gurus: Dr. Spock, T. Berry Brazelton, Penelope Leach, and many others.

Now that Ari is eight, our focus has shifted yet again, this time to a subject that’s harder to master through books. As white parents of a biracial son who is African American and Latino, we find ourselves rushing to stay ahead of our son’s blossoming sense of identity, his sense of himself as a unique individual with a particular heritage. We look for answers to questions he might ask, while trying to give him a solid sense of who he is even before he asks.

When we first adopted, the wonderful resources available today did not exist. Sometimes I wonder if so much knowledge at the very beginning of the process would have terrified us too much to proceed with a transracial adoption. Still, I am very grateful for the education now; at least we have a pretty clear idea of what we have to do.

Transracially adopted children do not have the advantage of learning about their birth culture through everyday cues and bits of knowledge, assimilated almost unconsciously over years, as in single-race families. So the responsibility that parents have to their different-race children can seem overwhelming.

To fulfill that responsibility experts recommend:

No blueprint or formula, however, can assure that a child will grow up feeling proud of his or her ethnic heritage, unfortunately for us. We are the kind of people who like making lists and checking things off. We have sent our child to culture camp, joined diversity groups, read books and gone to workshops, attended cultural festivals as a family. In fact, most parents involved in transracial adoptions make similar efforts. We are deliberate parents; we want to do right by our kids.

Ultimately, we have had to come to terms with an inescapable reality: we cannot master transracial parenting. No matter how many things on the list we do, no matter how exemplary we ourselves might be as role models, no matter how much we love our sons and daughters, we cannot be our child’s color and part of his or her cultural heritage.

Once we accepted that we could never parent our child perfectly, this apparently discouraging news actually liberated us. Once we acknowledged the challenges facing us, we could reduce the tasks into manageable pieces. Then we did what all parents do: try hard, stay in the game, and hope for the best.

Acknowledging that transracial parenting is an inexact science, we’ve learned some important lessons along the way. Diversity is not enough. Diversity is good, just not enough, if it does not include someone a child can identify with directly.

We live in a very diverse community, with neighbors from China, Samoa, Japan, Vietnam, Hawaii, the Philippines and Korea, but our biracial son does not find himself reflected in any one of them. Being with non-whites is not enough; transracially adopted kids need people like themselves in their lives. Choosing a certain barber, babysitter, or Cub Scout troop can influence a child’s sense of himself.

Surprises Along the Way

In blind zeal to meet people of Ari’s race, we acted as though economic circumstances did not matter, inadvertently accentuating differences more than similarities. Our family traded houses for part of a summer with a family from another state. The African American and Latino neighborhood we chose was culturally rich, but economically disadvantaged, a far cry from our middle class neighborhood at home.

We had a wonderful experience, but learned something that sounds terribly snobbish to admit in our egalitarian society: economic circumstances, perhaps as much as race, create different experiences and therefore different perspectives, even values. We have learned to seek out more than just race as a common ground with strangers whom we hope to have as friends.

At times, we’ve found ourselves forcing our experiences and relationships. I remember sitting through a Sunday morning service in an all-black Baptist church. Sure, Ari got to see lots of lovely and friendly black families, but since we are Jewish we could never truly belong to a different religious community.

We have since learned to customize our family traditions so they fit our particular combination of cultures. One December, when Kwanzaa and Hanukkah overlapped, we hosted a Kwanzukah party, which has since become a tradition bringing together our African American and Jewish friends. We did not have to give up our heritage to connect with our child’s.

Transracial parenting has been both harder than we imagined, and not so hard at all. While these additional efforts might seem to make parenting harder, none is really a hardship. It’s a pleasure to celebrate Kwanzaa and Cinco de Mayo with friends, march in the Rainbow Coalition parade, and cook wonderful ethnic foods.

Trans-racial parenting requires more deliberate efforts than same race parenting, but I cannot think of one that has not been altogether worthwhile. Interestingly enough, what’s hard about transracial parenting is building a feeling of ordinariness into extraordinary days, making experiences into more than just a series of field trips, creating for our son a securely unified life.

The range of transracial parenting experiences has forced us out of our comfort zone, and developed an extra measure of courage in us all. Being part of a mixed race family has not only challenged and enlightened us, but also altered our individual personalities. We’ve had to become more boldly public as a transracial family.

We look to proud and successful men of color for clues on how to raise our son. Asking strangers to help in this way can be scary, but we’ve been amazed at their generosity, and at the value of these discussions. The more we have reached out to people unlike ourselves, the easier building a rapid rapport with strangers has become. Soon we realized that people aren’t so different after all. Beyond all its other benefits, transracial parenting inevitably boosts a family’s social life.

We also realized that our son might not care as much as we do about all this. Parents are sometimes more gung-ho to learn about their children’s culture than their children are. After we went to great lengths to find and attend a culture camp with Ari one summer, all he seems to remember is the indoor pool at the motel where we stayed and the candy that was sold in the canteen after lunch.

Those were his favorite parts, though, of course, we hope that some of the experiences he doesn’t remember also made a lasting impression. Trans-racial kids aren’t necessarily motivated to learn all they can about their birth cultures, any more than same race children are, but that doesn’t negate the importance of the family becoming educated.

This continuous effort at making ourselves more racially sensitive and aware, however, edged us toward extremes at times. Once the radar screen goes on, racism seems to be everywhere. In our gusto to do right by Ari, we moved imperceptibly into the zealot zone, overdoing our quest for racial enlightenment.

We paid no heed to the effect our new-found passion was having upon our friends, not to mention Ari, neither of which was always good. In our enthusiasm to educate ourselves about Ari’s ethnicities, we lost sight of the main goal of enhancing his pride, not ours, in his heritage.

Sometimes when I think about the challenges ahead of us, navigating Ari from a little boy to a teenager and then to a man, I get tired enough to nap. Happily, parenting brings rewards aplenty to make the journey most worthwhile, and parenting Ari does seem an extra measure special.

Our hope is that Ari one day will make this quest to know his heritage. Parents can nourish young kids with healthy foods, but young adults pick their own menus. We hope that when that time of searching for himself comes, Ari’s early experiences will resonate with a deep meaning. We also want Ari to know how much we care about who he is, as a unique individual. The bad news is that we will no longer be choosing which elements of his culture get emphasized.

We have fun; serious issues don’t have to be somber. We even get a kick out of the surprise reactions our mixed family elicits in some people. We cannot help but laugh at some of the ignorance we encounter; and we are a closer family for being on this journey together.

Interracial families feel that they see the world more clearly than others, because we’ve experienced it from a different angle. We start to believe that we are better than our plain old vanilla counterparts, but then again we’re quick to recognize bias, even when it’s our own.

When all is said and done, I suspect that it’s harder to be a transracial family; harder on the parents and harder on the children. Like most things in life, though, the greater the challenge, the greater the reward. For us, the challenge of raising a child with a strong and uplifting sense of himself has already been frustrating and demanding, as well as illuminating and enriching. And the journey has barely begun.

<
Previous:
The Longest Mile
Next:
>
"I Am Mom, Hear Me (Meekly) Roar!"
Authors
Jana Wolff