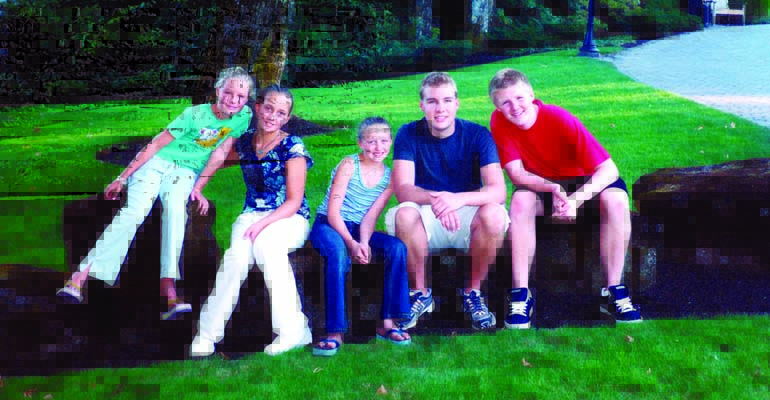 We came into our new daughters’ lives on a rainy spring morning, under the promise and blessing of a rainbow. Two hours later, we were as close as we would ever get to abandoning the whole project.

Alexandra and Angie were sweet children, who were obviously trying to be as relaxed as possible, considering they were meeting the people who might turn out to be their parents for the rest of their lives. But as they towed us into their bedroom at their foster home, the meeting veered quickly into the unexpected. They showed us family photos on the dresser, regaling us with names, birthdates, and the personality quirks of four beloved siblings, in other foster homes, whom they still saw every few weeks.

On the drive home, Kathryn was silent. Finally she said, “They’re not ready to come to us. All they talked about was their family!” It was an unsettling moment. We understood for the first time how different Fost/Adopt was from infant adoption or international adoption. These girls were neither institutionalized waifs nor newborn infants. They had a large, extended birth family and school friends. They were 10 and 12; they had histories. They had lives.

Tom’s response, “What else do they have to talk about? This is who they are — so far,” while not wholly satisfactory, did tide us over into more meetings. The girls came to our house for weekends, brought by social workers, their foster parents, and their CASA workers, all of whom had known them a long time and wanted to assess whether we were a good match. Some weekends, we drove to the girls’ foster home, bringing our three children. We sat on the beach and talked about the kind of family we were; we built sand castles and showed them the kind of family we were.

And we talked about how adoption meant they would eventually transfer allegiance to us as their primary family. Kathryn used the analogy of people getting married, forming a new union while loosening the bonds of their first family. Of course, 10- and 12-year-olds are rarely called on to make such transfers of affection. Angie’s heartbreaking words, “But if you knew my siblings, you would like them,” turned out to be true, and, in our way, we honor their ties to their birth siblings. But we knew the details of the neglect that had led to their placement in foster care. Maintaining strong links to their birth family, we believed, would not benefit them. Our nuclear family was close-knit; Alexandra and Angie needed to be knit into the fabric of our lives. Anything less, and it would seem to us that they were just visitors, passing through.

The first weeks of an older-child Fost/Adoption, when the new child has finally moved in, are strange for everyone. The child is neither guest nor wholly family. We told Alexandra and Angie to make themselves at home — but it wasn’t as easy as that. Alexandra tells us now that those first weeks felt exhilarating, but also unreal, as if she’d landed in a very cool summer camp. It was a whirlwind of activity and new experiences. But it didn’t feel like real life. Her frame of reference was still her old city, old friends, and first family. Pragmatic Angie was eager to sign finalization papers, but we worried that, in her delight at her new big house, new freedoms, and little luxuries, she overlooked the fact that she didn’t love or even truly know us yet. We also worried about the forthcoming visits (every three months, court-ordered) with their birth siblings. “Let’s wait,” we told her. “Let’s take things slowly.” After all, the gradual road to family commitment was what had attracted us to Fost/Adopt in the first place.

Other issues arose. From the beginning we tried our best to treat each child in our expanded family as an individual, in order to avoid an “us and them” situation. But Alexandra and Angie brought with them a dynamic that simply didn’t work with our birth children. We had always taught our kids to build each other up, not tear each other down, but our new girls teased in a way that seemed hurtful. After two days, we sat down with them to talk about family manners. To our surprise, they changed their ways immediately. We wondered whether, after several different foster care arrangements, they had become little chameleons, ready to adapt to anything. The unanswered question was: Who were they, really?

Meanwhile, we lived with visits every two weeks from our local agency’s social workers, as well as occasional check-ins from county social workers — all of which continued until the adoption was finalized. They talked to us and then to each child separately, gauging how things were going. In general, these visits were respectful and low-key.

Except once. Out of the blue, a social worker informed us that one of the girls’ biological siblings was having a hard time accepting their imminent adoption. Therefore, he suggested, we would need therapy to understand this sibling’s feelings of loss. We refused, point-blank. This, we insisted, was an issue to be handled by others, not by us. Some social workers mistakenly seemed to approach our situation as extended foster care, with the end goal of reunification. We were adamant that the goal of adoption be kept firmly in view in our case. And that meant that every effort should be focused on helping these children bond to us — and us to them. The social workers backed down. It was, they said, a misunderstanding.

Then came the day of Alexandra and Angie’s four birth siblings’ visit. We were filled with trepidation. Their two older sisters, we knew, had provided love and continuity when, by all accounts, chaos ruled their lives. But at least one of the siblings had spoken actively against the adoption. How far had Alexandra and Angie come, in their first months with us, toward making us their primary family?

The siblings arrived with piles of presents and fell on each other with glad cries. We watched them walking down the road arm in arm, looking so much alike. We heard the teasing, listened to the laughter. We stood with the social workers supervising the visit, watching — and worrying. What would be the fallout, we wondered? Would our girls grieve after their siblings left? Would the old dynamic reassert itself?

At the end of the visit, we took photos. Then Angie and Alexandra came to stand with us as we all waved goodbye. We held our breath. But Angie and Alexandra just smiled. “That was fun,” they said, running back to play with Isabel, Daniel, and Nicholas. We entered the house, expecting tears — but there were none. We listened for rude teasing — but it didn’t come. Our girls were back with us, and seemed happy to be there, right at home. We exhaled in relief, smiling at each other.

This was going to work.