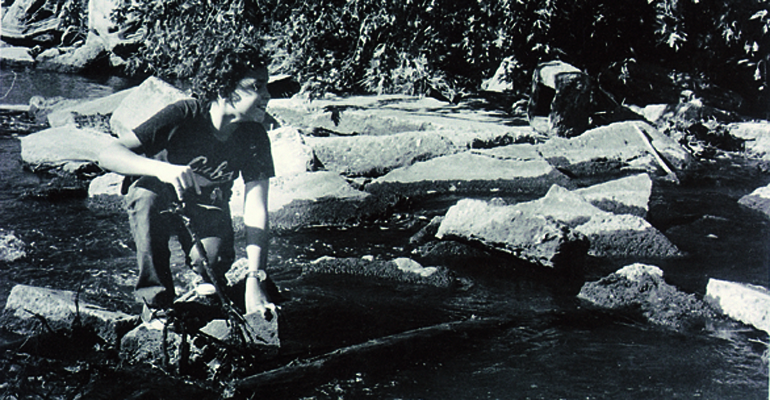 The dreams that I have of my youngest brother, who died in a car accident at the age of twenty-five, always leave me with a sense of loss. I dream that I am trying to hold him as he slips down a dangerously steep slope. I dream that he has done something wrong and is fleeing down a stairwell, away from me, as I call out my forgiveness. I dream that we are repainting the hallway where his crib once stood. Then I wake up wishing that I could go back and make his life better, take away the peeling paint and wallpaper, repair the breaches in our family, make us whole again.

His life with us started out like a fairy tale: the little foster child swept away from his unsettled life into the permanence of a big and loving family — three brothers, two sisters, two parents. I remember vividly the Christmas morning awe with which I experienced his arrival. I was eight years old, old enough to be amazed that my family would be selected to raise such a beautiful little boy. I understood the importance of the social worker and tried to look as deserving as possible whenever she visited.

When all the arrangements were complete, my mother took a Greyhound bus to Minnesota to pick Darrell up from the home of his foster mother. I came back from school one day to find that she had returned. She invited me to look in on my sleeping brother. I tiptoed up the stairs and stood by the crib, looking at him with awe: My new brother. He looked peaceful, happy that the trauma of being shuttled from foster home to foster home was over, ready to settle into our family. He was ten months old.

Later, when he awoke, I found that he wasn’t as peaceful as he had seemed. He laughed easily, but also cried. At night, his crying kept me awake for hours. Full of rage, he shook the bars of his crib, and I wondered why he was so angry.

Now I wonder what his coming to us was like from his point of view, the voice and face and smell and touch of his foster mother suddenly gone, like that of previous foster mothers. The world must have seemed terribly impermanent, full of arbitrary changes. Around him were strangers, trying to comfort him or feed him or make him laugh. He responded to us in his open way, laughing or crying or screaming, but he must have thought that we were bound to disappear, too, that no family would love him forever.

The years after Darrell’s adoption were years of increasing conflict in our family. As I watched my parents argue, I worried that they were too preoccupied with their own pain to take time to teach my brother the proper values. So, at the age of ten or eleven, I appointed myself as his teacher, taking him with me as I did farm chores or wandered around in the woods. To teach him responsibility, I put him in charge of feeding a small pen of crippled chickens that I’d segregated from the others. To teach him perseverance, I tramped about the woods with him, cheering him on when he became tired. I urged him to laugh at himself when he tripped and fell, instead of resorting to his all-too-frequent tears.

Right before Darrell started kindergarten, our family broke completely apart, with my mother getting custody of the four youngest children, including me, and my father getting custody of the two oldest. During this time, I confided often in Darrell, knowing that his slow speech development would prevent him from repeating anything I said. He didn’t have the words yet to confide in me, and even now I wonder how he felt. Perhaps all relationships seemed to him to be temporary, as he had found them to be in his infancy. Or perhaps the continuity of those few years with us had taken hold in him and he, too, was shocked into a deep and lingering sadness by the breakup of our family.

He continued to learn and grow in the following years, struggling to overcome hyperactivity and learning disabilities. I tried to help him practice his reading, and I found that more than half the battle was getting him to focus on the page in front of him. My mother bought a label machine and labeled items throughout our house hoping that seeing words in his everyday life would help him learn to read.

A Boy Who Shared

Even with all his difficulties, he remained a spontaneous and naturally expressive child, more generous than the rest of us, the only brother I had who was likely to share a bite of his candy bar with anyone. He expressed his love freely to our mother, claiming, as a six-year-old, that he would take care of her for the rest of his life. On family hikes the rest of the children would run ahead, while he stayed behind to help our mother across rough spots in the trail.

As I grew older, my relationship to Darrell entered a new phase. With our mother gone to work for long stretches of time, I was not just his sister — I was his babysitter. On school mornings I would chase Darrell around the house with a hairbrush. As soon as I brushed his hair he’d scruff it up, afraid his curls would brand him a sissy.

I worried in those years about his impulsiveness and lack of judgment. I watched my younger brothers vie for our mother’s attention, as though there just wasn’t enough of her to go around. I also worried about Darrell’s health, his nosebleeds and asthma. In my early teens, I went up in church to request prayer for his healing, faith welling up in my heart as I hoped and prayed that my courage in standing up for him would somehow get him healed.

I wondered how Darrell felt about the inaccessible parts of his past and heritage. When I was a teenager we took a camping trip to Minnesota, his birthplace. But he never knew his birth mother, never knew the Chippewa tribe that he would have been part of had she been able to keep him.

The next part of our relationship I rather regret, although it was probably a necessary phase of my life. When I went away to college, Darrell was around eleven and caught up in a grumpy stage that didn’t leave much room for older sisters. When I came home for Christmas that first year, I spent most of my time down at the local high school developing pictures in the darkroom. That Christmas, Darrell spent his own money on a present for me, a glass dessert bowl that I still use and treasure.

I came back from college for only one summer, a terrible summer in which I had a headache whenever I wasn’t working. Family relationships were realigning, it seemed, leaving no room for me. The next summer, and every one after it, I found a job at school — the coward’s way out, I suppose. Or maybe it was necessary for me to distance myself from my family as I worked my way toward adulthood. But in the process, I missed knowing Darrell well as a teenager and later as an adult — and now it’s too late.

The last time I saw Darrell was one Christmas, the year I visited my mother in Arizona. At that time, Darrell was more interested in friends than family. For some reason, I remember little from our time together. I do know, though, that as an adult he was rather unsettled, moving from apartment to apartment, job to job, girlfriend to girlfriend. Toward the very end of his life, he explored his heritage. He took part in a sweatlodge ceremony and emerged feeling forgiven. He made plans to visit the reservation he originally came from, where he expected to meet his birth mother. But before that visit could take place, he caught a ride with a drunk driver and was killed.

Life as a Gift

For years when I reflected on his death my overriding thought was that it was unacceptable. I have looked again and again at the family pictures from those golden years, before the family circle was broken. In one picture, we six children stand in front of a big ash tree. In the background stands the barn, a solid, bold red, and a fence so bright white that it seems almost to glow. In another picture, the entire family is posed indoors against a blue background. Darrell laughs freely, while the rest of us smile, stiff in comparison.

Sometimes, looking at that family as it was right before the divorce, I have wondered if perhaps God misdirected the gift of our brother. Perhaps he should have gone to a more stable family, a family that could carry him through childhood without the pain of broken relationships.

But then I look at other photos that capture Darrell’s spirit. In one, he crouches on a rock in a river, ready to leap to the next rock, full of that sense of adventure that prevailed in our family. Another photo holds my attention the best, though. It shows Darrell trimming the Christmas tree. He was old enough to have grown jaded with Christmas celebrations. But the absorption as he hooks an ornament onto the tree shows a boy who would never outgrow Christmas no matter how long he lived. I realize then that our family provided him with something special — the Christmas morning awe with which we greeted him as he came into our family. With this awe, we taught him to experience life as a gift — precious, fleeting, and sometimes broken, yet always good.

<
Previous:
[Book Review] Adopting on Your Own: The Complete Guide to Adopting as a Single Parent
Next:
>
"Lost Daughter"
Authors
Laurel Van Der Wende