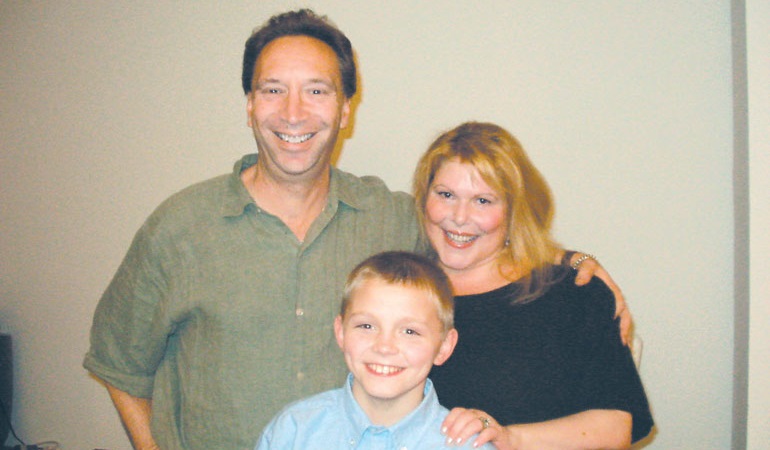 We were absolutely and completely happy being a childless couple. We’d been married for 13 years, shared our lives and our work as writers, and had plenty of contact with children, since much of our writing was (and is) for preteens and teens. We were in no way, shape, or form unfulfilled.

Which is why, in November 2001, if you’d told us that 18 months later wed be the parents of an 11-year-old boy from Vishini Volochek, Russia, we would have kindly suggested that you peer into another set of tea leaves.

Three important catalysts changed our lives. First, there was 9/11. While it’s a cliché to say that 9/11 changed everyone and everything forever, clichés don’t spontaneously generate. That day’s dreadful events shook us and made us take a hard look at our values and our lives.

Second, there were Bill and Missy Comer, in Williamsburg, Kentucky. When we were invited to Cumberland University as writers-in-residence in December 2001, we met Bill and Missy, a professor there. At the time, they were on beeper standby, ready to go to Russia to adopt a pair of newborns. They got us thinking. Our grandparents came to America from Russia, so there would be a cultural link if we adopted from there. However, we felt that an infant or toddler was not in the cards for us.

We wondered if we could get an older child, and whether we could, indeed, handle one. What about the language barrier? The cost? The change of lifestyle? And what would our families say? And where would we put a kid in our L.A. apartment? You get the idea. We’re never shy about asking questions.

So, my wife, Cherie, went on the Internet, and there she found catalyst number three: Kidsave International. This organization has, over several years, brought more than a thousand Russian, Kazakhstani, and Colombian orphans and social-shelter kids, ages 5 to 16, to America for a summer experience. Kidsave kids are placed with American families, attend summer day camps, and enjoy weekend gatherings with other kids and families in their group. After six weeks, they return to their nations of origin.

Kidsave isn’t an adoption agency. Its larger purpose is to advocate for the abandoned children of these countries, who face the bleakest future imaginable. In addition to the American camp program, they also link kids to families in their own countries, find them work, and more. And sometimes they make miracles happen: A high percentage of the children they bring to America for a summer end up adopted.

When we signed up to be Kidsave hosts, we pretty much knew what we were getting ourselves into. Still, it was presumptuous to assume that a kid would want to cast his lot with us.

We wanted to host a boy. I have three brothers, Cherie has two brothers, and we do a lot of writing for girls. Balance would be good. Enter the Russian Rocket, Igor Sergeyev, age 9 years and 10 months on the day he arrived for his Kidsave summer. Total English vocabulary: the numbers one through ten, plus hello, good-bye, and thank you. Words quickly acquired: bathroom, may-I-please-be-excused? Swim! You-are-going-down!

Igor’s story is Igor’s to recount. Suffice to say that he came to us after a brief stay in a social shelter in Vishini Volochek, a town of about 30,000, halfway between Moscow and St. Petersburg. He read and wrote Russian well—he could recite Pushkin poetry without much difficulty. His language skills made it possible for us to communicate via the Russian-English translation program on my laptop (I carried it everywhere). We have several Russian-speaking friends here in Los Angeles, and all volunteered to act as translators for us, as needed.

Igor was then—and is now—smart, inquisitive, articulate, jock-ish, and funny. We loved having him in our family. We knew in three weeks that we wanted to adopt him. But the decision was not entirely ours to make. In Russia, once an orphaned child reaches age 10, he must consent to his own adoption. This is not just a technicality. During the adoption proceeding, the child is brought before a judge in a formal courtroom and asked a series of fairly blunt questions to make sure that he understands the gravity of his decision.

We didn’t know until September that Igor wanted us as much as we wanted him. When we got the news, we were thrilled.

The adoption process, an expensive pain-in-the-neck-or-worse no matter how you go about it, was as smooth as could be for us, considering how late we began the paperwork. Home study and INS approvals were done quickly, with the strong support of the excellent Global adoption agency in Wyoming and Kidsave here in Los Angeles.

Via the Internet, I made friends with an English-speaking professor at Tver State University. (The government center that rules the town of Vishini Volochek is in the nearby city of Tver.) I also connected with the head of computer programming for the Tver regions bus lines. Both helped us get a constant stream of letters to Igor at his shelter, and the family of the computer programmer invited me to stay with them during my lengthy adoption-process visit. Cherie came over late in the process, in time for court. Peter and Iveta Brecko, immigrants from Latvia and our dear friends in Los Angeles, were principal translators during the Kidsave summer, and they did phone-translation duties when we called Igor every Thursday from September until our arrival in Russia.

IGOR (via translator): When are you coming?

Everyone pitched in. Our families were generous with time and funding. We got some welcome financial aid from the A Child Waits Foundation, which provides low-interest loans for international adoption. In fact—and I think it would be true for anyone considering adopting an older child—people bent over backwards to help us. Our gratitude still overflows.

CHERIE AND JEFF: When did we say we’d come to Russia?

CHERIE AND JEFF: What would you say if we told you that Jeff will arrive in Moscow the day after tomorrow?

Our adoption trip to Russia, from mid-February to March 8, was unforgettable, but I’ll leave those details for another essay I’m sure to write one day.

On the night of March 8, Igor slept in Los Angeles in his bed in his room. We hadn’t changed a thing from the summer. IGOR SLEEPS HERE was still the sign (in Russian and English) on his door. Everything was the way he’d left it. Of course, now the sign is down in favor of tae kwon do belts and a scrawled PLEASE KNOCK! Our experience over the past 13 months seems almost otherworldly, given what Igor has accomplished and how our lives have changed.

As writers, were fortunate to be able to work from home, so homeschooling was an option for us. We taught Igor for three months at the Dickens Street Academy of Rapid English Acquisition, a.k.a. our dining room table. He learned rapidly, to say the least. He became a rabid Lakers fan. We put him in tae kwon do classes his third day here so he could watch and copy what the other kids did. He quickly became and still is a legend in his studio, progressing through six belts already. On a long family trip to Utah, he learned how to snowboard. Igor is in fifth grade at Temple Beth Hillel Day School here, and he has friends—lots of friends.

PUBESCENT GIRL (giggling): Umhi. Can I speak to Igor?

JEFF (extremely stern): Who is this?

PUBESCENT GIRL (more giggling): Ashley (or Rachel or Jo or Rebecca or…).

JEFF: Sure. But first, fax us your report card!

Oh, thereve been bumps in the road. There are with any kid. Being so verbal in Russian, Igor’s transition to English—and his frustration at not being able to express himself—was trying. Now, after 14 months, he speaks English better than we do (just ask him!). Igor was a young child who had to rely mostly on himself before he came to us, so it’s sometimes been difficult for him to relinquish control to us, his parents. But there’s nothing we can’t handle if we keep our heads on at least halfway straight.

The card we sent out announcing the adoption said it simply: And now, we are three. And so we are. Now and forever.

A hosting program may mean a forever family for older overseas orphans.

The Gottesfeld/Bennetts are one of the many families who have come together via a summer program that brings children from Europe and South America to the United States for a camp and host-family experience. Sponsors of these programs—such as Kidsave International, Gladney, and Cradle of Hope—say their purpose is to increase awareness of older children available for adoption, and to provide the children with a family and camp experience that might lead to adoption.

The 5- to 17-year-old kids, most from orphanages or social shelters, spend three to seven weeks here, at camp by day and with host families by night. After camp, the children return to their orphanages. If a family chooses to adopt their visiting child, the process takes two to 12 months to complete.

Children are selected for the programs based on age, health, and ability to travel and live in a family setting. They’re also screened for TB, HIV, and hepatitis. Those selected are told about the program, and that they will afterwards return as a group to their orphanage.

Although instructed not to discuss adoption, orphanage workers and escorts don’t always comply. Many parents who have participated in host programs report that their children were told that if they were good, the family might adopt them. Beyond this, the children understand that most campers return to the orphanage, only to have a family come for them soon after.

Whether or not they’re looking to adopt, host families must fill out preliminary adoption paperwork. Some programs also require parents to attend seminars with social workers, therapists, and adoptive families.

During the summer program, a local coordinator stays in contact with the host family. Many camps have hotlines set up for parents to ask questions at any time.

As wonderful as these programs seem, they’re not without naysayers. Some critics call them rent-a-kid programs that shop children around for adoption and create unrealistic expectations for families. In addition, the children are brought into an existence out of their reality. Cultural differences are huge—as is the pressure the children feel to be adopted.

The crucial elements to a successful outcome for host families and children are realistic expectations, strong parent preparation, and ongoing support. Many parents who’ve adopted through the programs say they weren’t prepared sufficiently by camp sponsors for ensuing challenges: attachment and trauma issues, attention deficit disorders, controlling behaviors, effects of malnutrition, and more.

Host families should also be prepared for surprises—glitches in orphanage cooperation or last-minute cancellations due to illness, quarantine, or policy change. Also, families may learn of siblings not previously mentioned or of a best friend who cannot be left, and in some countries an older child must consent to his own adoption.

All this being said, the greatest advocates for the summer camps are the participants. Parents unanimously agree that the best part of the programs is that they found their children—and so do the kids. They praise the support that the camps give to older children during the transition to family life, and attest that intervention helps their kids overcome many physical delays.

Finally, its statistics that tell the tale: 90% of the children who participate in the camps find forever families.

Mara Kamen is on the board of Families for Russian and Ukrainian Adoption (FRUA).

<
Previous:
Is Adoption Always Sad?
Next:
>
An Adoptee Wonders: "Where Did I Come From?"
Authors
Jeff Gottesfeld
Cherie Bennetts
Mara Kamen