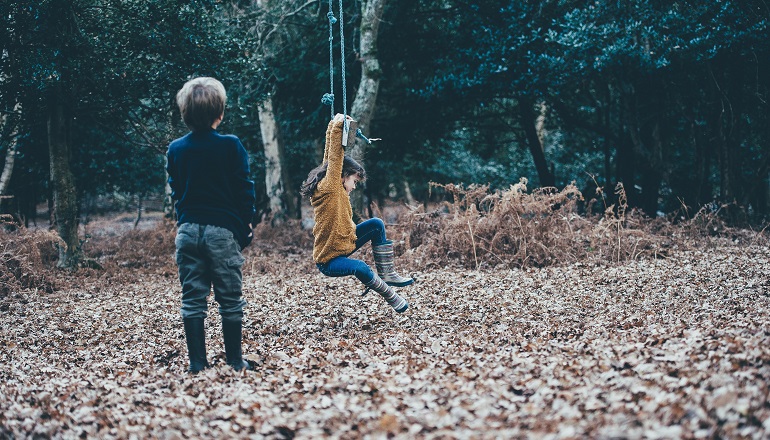 My husband was waiting for me in the car when the phone rang. I should have let the call go to the answering machine, but on an impulse, I picked up.”We have a little girl for you,” the agency director said. “What?” My mind was racing. “How could they have a child for us so soon? We just sent in our initial application.” “She’s 4 years old, and when we saw her picture, we thought of you. Are you interested?” “Of course, we’re interested.” And so our story began.

In a Family Way

The picture came the next day, along with a two-page account of the beautiful little girl in Nizhny Novgorod, Russia, with the sad, troubled past. Nastia’s big brown eyes stared into our very souls. Our decision was instant, before we read a word on the page. A good thing, too, because a surprise was waiting for us on page two. Under the heading Siblings, it read, “Boy, age 10.”

We had never planned on sibling adoption. The thought of two was very intimidating. But having sisters and a brother of my own, I could not imagine life without them, and I knew Nastia would feel the same way. We made the decision in a matter of minutes. I dialed the agency and greeted the director with a resounding, “Yes!” Then I asked, “Could you tell us about her brother?” “Why,” came the reply, “are you interested?” She seemed surprised. “Of course, he’s her brother.”

The months that followed, however, were not easy. A few months into the process, it became evident that we might not be able to find, much less adopt, Nastia’s brother, Vanya. In fact, Nastia’s adoption was plagued with delays. Finally, after a month in Russia, we returned home with our daughter.

Our first weeks with Nastia were joyful beyond words. But we had some unfinished business…we had to find a way to adopt Vanya. We started calling Russia—and calling, and calling. We asked many questions: “Where was he?” “Did Vanya and Nastia know about each other?” “Can someone help us find him?”

Then Nastia, who was learning English, began to fill in some of the blanks. Every time she saw a school bus she would call out, “Vanya.” As her vocabulary increased, so did her prayers, asking God to bless Vanya, Babushka, and the little dog. She told stories of Vanya climbing trees, Vanya laughing and playing with her. “Is this true?” I wondered. “Where is this boy? Will he ever be ours?”

Finally, we got results. A photo arrived—and Vanya looked like one tough boy! His head was shaved, and his stare was blank and troubled. “Oh no!” I thought. This is not what I had envisioned. I wasn’t about to change my mind, but I was scared.

The next nine months were anxious ones for me, like a pseudo-pregnancy, full of excitement, questions, and doubts. I realized how naïve and unprepared we had been when adopting Nastia. “Could I handle the challenges of a second child who might have serious problems? Could I truly love a child who might reject me?”

Peace came the day we left for Moscow. I left my fears behind. I was going to get my son.

[“Our Leap of Faith: Finding Birth Relatives in Russia”]

When we met Vanya, he was standing outside his boarding school in Bor, Russia, with a group of boys, watching our van pull up. He later told me he was on his way to have a cigarette! When we opened the van door, he jumped in with a big grin. He was ready to go with us that minute. So much for not wanting a mother! That tough boy in the photo was a smiling, eager, hopeful 12-year-old. We gave gifts to him and his friends and promised to return two days later, after we had completed the adoption paperwork.

As we left the boarding school, I asked the official if we could see the house where our children had lived with their family, and within twenty minutes we were there. I was astonished. Nastia was only 3 when she left this place, yet the description she had given me was completely accurate! There was her home, the stream, the pear tree. And to our great surprise (for we thought she had died), here was her Babushka coming out of the house.

We approached and our interpreters spoke to her. Babushka, so little and worn, and blind, was crying. Excited neighbors and their children came rushing out of their houses. We were introduced to Babushka as the parents of her grandchildren, and she was overcome with emotion. We all were. After a teary good-bye, we headed back to the home of our host family.

Two days later, at the boarding school, the director accepted our gifts and then turned away and sobbed. Teachers cried, and children cried, hugging one another and hugging Vanya. We gave the children some more gifts and treats, took some pictures, and then it was time to go. Through tears, my husband and I looked back at the children, while our smiling son sat between us.

We then headed back to keep a promise we had made to Babushka—that she would hold her grandson one last time. As we got out of the van, who should come trotting along but Mishka, the little dog. Babushka was waiting. Vanya said good-bye to his childhood friends, to his Babushka, and to his dog.

Vanya and Nastia’s reunion at Kennedy Airport was one of the sweetest moments of our lives. Even after years of separation, the joy and delight of recognition was all over their faces. Nastia was hugging him and chattering in English about her house, her cat, her car. Vanya talked to her in Russian.

Vanya soon proved to be a sweet, active, inquisitive boy who loved to fix things and fiddle with gadgets. We never saw the seemingly troubled child in that photo.

I’m glad we were naïve all those years ago. Otherwise, we might have said no instead of yes—and missed this great blessing. Today Vanya is 19 and Nastia is 14. He is a wonderful son and brother, kind, considerate, and caring. Nastia, our sunshine, summed it up beautifully one morning as we dashed off to school, with Vanya standing at the bus stop, waving goodbye. “Mom, I love that boy. He picks me up when I fall down.”

<
Previous:
The First Weeks Home with Your Baby
Next:
>
Ask AF: How Does Stepparent Adoption Work?
Authors
Eileen Kadletz