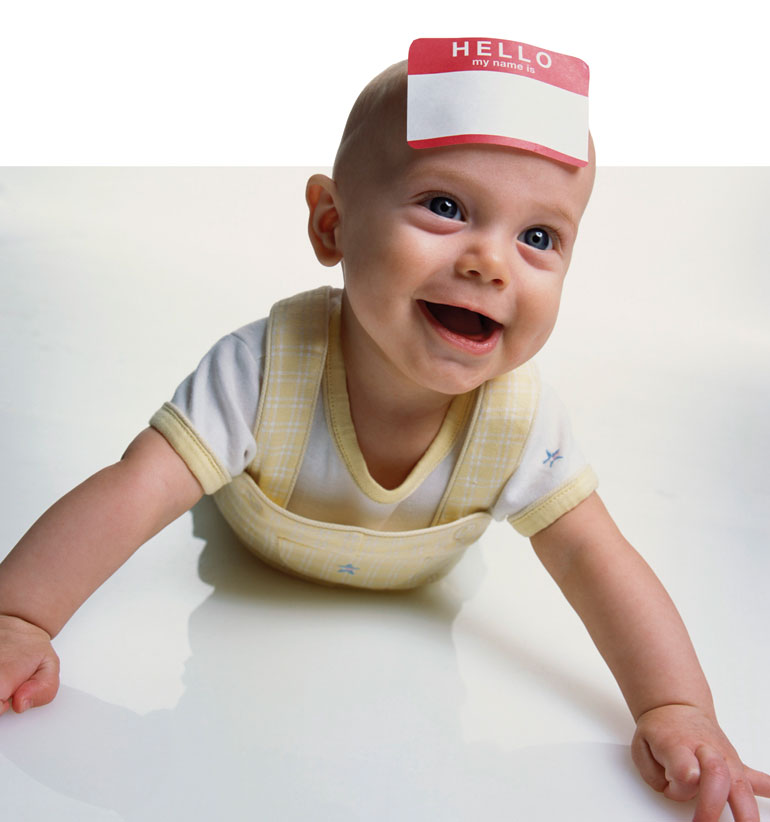 All parents want to choose the perfect name for their child. It shouldn’t be too common or too unusual, and it should fit the child’s personality. We debate spellings and nicknames for hours on end.

But when a child comes into your family with his own unique history and culture—and his own name—it can make the debate around naming your adopted child that much tougher. There are no strict guidelines (See the “Naming Your Child: Legal Considerations” sidebar) for choosing your child’s name, but here’s how other families have handled the decision.

For many families, preserving a link to the child’s history is the most important factor in the naming decision. “People would ask what we would call the baby we were adopting, and were always surprised when we responded, ‘Whatever name she is given,’” says Holly Montague of Kenai, Alaska. She kept part or all of her three children’s names when she adopted them from Guatemala. “Our children’s names are a connection to their birth family, culture, and country.”

Keeping the birth name can be very important to children adopted at an older age, as they have been known by their name for years. “When kids come in to the family past infancy, they don’t like to have their names changed,” says Deborah Gray, a social worker and author of Attaching in Adoption: Practical Tools for Today’s Parents (Perspectives). “It is disconcerting to have so many identity factors change, and also to have their names changed.”

That’s what led Erica Zito to keep her daughter’s birth name. “By the time we finalized our daughter’s adoption, she was two years old,” says the mom of two in Cedar Rapids, Iowa. “Samantha had been her name for two years. It maintained a link to her birth family, and we liked it!” If the child you’re adopting is old enough, the best course may be to ask for his input.

“Parents should talk with their newly adopted child about his name. See if he wants a different first name, or wants to keep it as a middle name,” says Vicki Peterson, director at Wide Horizons for Children in Waltham, Massachusetts. “And let children know that, at a later point, they can change their minds about what name they wish to use.”

Some adoptive parents find that the child’s birth name simply fits him—and their family. “Our child’s birth mother selected Joshua for his first name, and Edward for his middle name, to honor her deceased father,” says Amy Stipancich of Davidson, North Carolina. “We already had ‘J’ names in our family, so Joshua fit well. We kept his entire birth name as a tribute to his birth mother.”

Choosing an entirely new name for a child is a way to welcome him into your family and claim him as your own. But many families bypass the baby names books and turn instead to their family trees. “To emphasize the claiming nature of naming, you might choose a name that is significant—a beloved relative or other special person in the family’s life,” says Mary Ann Curran, director of social services at World Association for Children and Parents in Seattle. “That will increase the honor of having that name.”

That’s what Kim Marie Nicols of Needham, Massachusetts, did for her daughters, Parlee and Jenny, named for their great-great-grandparents. “The family connection was important,” she says.

For Sharon Valente of Medina, Ohio, deciding to name her son after his grandfathers was easy—but picking the names was not. “Both of our fathers, my brother, and a nephew are all named John, so we chose our fathers’ middle names, Peter and Angelo.”

Allowing siblings to participate in naming the new arrival can encourage a strong bond. “We bought a baby names book, and I made a few suggestions,” says Susan Huston of Claire, Wisconsin. “But it quickly became apparent that our daughter had set her mind on one name. ‘If I get a little brother, we’re going to name him Max!’ she repeatedly told us. This wasn’t a name my husband and I had ever considered, but Emmaleigh obviously knew something we didn’t, because Max is a Max through and through.”

For the majority of adoptive parents, the answer to the naming challenge is easy; combine their child’s existing name with a new name. (See more naming trends in “The Name Game” sidebar.) That’s what adoption experts often recommend. “I advise families never to drop all components of the birth name,” says Curran. “Keep some piece of it, perhaps as a middle name. It sends the message that a child’s past has been honored and accepted by the adoptive family. It also gives the headstrong teen who decides, for example, to become 2000% Asian for six months, a chance to use an Asian name if she wishes.”

Usually, the birth name becomes the middle name, and the parents choose a new first name. “We wanted our daughter’s name to reflect my heritage, her heritage, and my husband’s heritage,” says Holly Massie of North Plainfield, New Jersey, who adopted her daughter from Ethiopia. “Maren, her first name, is a family name. We kept her given name from her birth mother, and her last name (her birth father’s first name, following Ethiopian tradition) as her middle names. Her full name is a little long, but we felt it was important to keep all of them.”

When families decide to change a child’s first name, many choose one that ties to her birth culture. “I found Karina in Baby Names from Around the World,” says Joyce Bouchard of Frederick, Maryland. “It’s Russian, not unusual enough to be burdensome, and my husband and I like that it can be shortened to Kari.”

Some want a single name to symbolize both the birth heritage and their own. “Caeley is Gaelic for ‘brave warrior,’ and our daughter’s heritage is Kekchi Maya, who were never conquered by the Spaniards,” says Susan Ryan of McCall, Idaho.

But no matter how much effort goes into the decision, some parents turn in a different direction altogether once they have a face to go with the name. “My husband and I had agreed on a name, but when we saw our son’s referral picture, we decided the name just didn’t fit,” says Alexandra Lopez, a mom in Germantown, Maryland. “With my son’s photo in mind, I found the name Benjamin. He really looks like a Benjamin.”