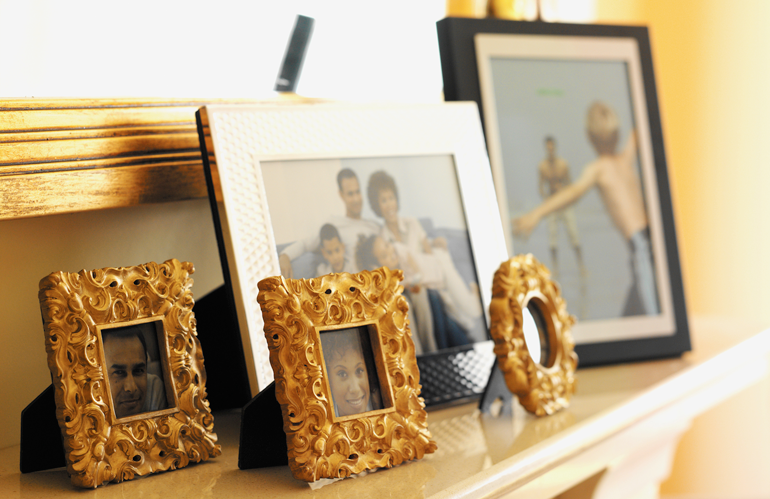 On our Facebook page (facebook.com/adoptivefamilies), we asked readers, Do you have pictures of your child’s birth family up in your house? If so, where? Why or why not? Here’s what you said:

“We love having a picture of that beautiful, brave woman, to inspire questions and love. It is also special for our boys to see the physical resemblance.” —MARIANNE

“We have a picture of our daughter being held by her birth mother next to one of our daughter with me and my husband. These two pictures represent her family. She is not yet one, but we show her the photos and about the love we all have for her. Her birth family is like our extended family; we will be forever linked.” —LISA

“We have photos in my daughter’s room. I am not afraid of people seeing them, but I do feel they are special for her.” —TERRI

“We spent lots of time with our son’s birth father and siblings while in Sierra Leone. He has a collage frame in his room, and we have a few in the living room. It is a special connection! They are family.” —JANELLE

“His mother is our hero, and everyone deserves to know where he came from. His dad isn’t the greatest person, though. We have a photo of him, but it’s not hanging in the nursery.” —BARBARA

“We have a double frame with our daughter and her birth mom at the same age. They look like twins.” —MITZKI

“Absolutely. Our daughter’s birth family is her family, and, thus, now part of our family. We want her to know her siblings, aunts, uncles, cousin, and grandparents as much as she knows my husband’s and my relatives. Sadly, her birth mother died recently, so she will never have the relationship with her that I was counting on her having.” —SUZANNE

“My children became mine at ages four and nine. We have framed pictures, and more in scrapbooks that are safely tucked away. All the literature promotes openness…however, both kids reacted very poorly to the photos. They didn’t feel safe in their bedrooms with the pictures up, so it was not the right time. We do have pictures of their birth grandparents up in our living room. As they heal and become increasingly comfortable with our family, they ask more questions and we’ve been able to look at pictures as a family.” —LAINIE

“I put our hospital photos with our child’s birth mom up in our room. It’s a reminder to me to talk about adoption and to show our son how special our family is.” —KERRY

“We have been debating what to do about this. We have some photos that we haven’t done much with yet. We hope to finalize in a few months, and I’m thinking it’s time get a couple of pictures framed.” —HAYLIE

No, We Chose Not to

“We adopted my daughter as a toddler through foster care. She has a lifebook on her bookshelf, and can look at the photos whenever she wants to. If she wants to put pictures up one day, I would support her in that. However, as her past was traumatic, I’ll follow her lead when she’s older.” —CHANELL

“As my son was bounced around in foster care, the agency did take pictures during his supervised visits with his birth mom, and she made a scrapbook for him. We haven’t put up those pictures, but he knows that the scrapbook is under his bed in his memory box if he chooses to look at it.” —HELEN

“I think it is a parent’s decision based on what is best for the child. My last two were adopted as teens from an extremely neglectful birth mother who exposed them to all sorts of terrible things. They have pictures, but they choose not to have them out because their memories are not good. My daughter does keep a photo of the sister who did not abuse her in a place of honor in her room. Even so, she takes it down from time to time because it’s too upsetting.” —ELIZABETH

“We had a trauma assessment done for our kids while they were still in foster care. The very thorough report shows that any contact with or reminder of the birth parents is detrimental to their mental health. We answer questions and talk about them when asked, but we don’t display pictures on a daily basis.” —BETH

“The kids did have one in their room, but found it too upsetting. I put it away for safekeeping.” —MEGAN

“No, but my son has a few photo albums that his biological grandparents provide for him and update. His adoption is very open and he spends time with them regularly, so the pictures show of him as a member of their family and of ours—and in some photos we’re all together.” —LAURA

No, We Don’t Have Any

“Pictures of our children’s birth families? We don’t even have childhood pictures of them! They came to us with the clothes on their backs and no photographs of their infancy/early childhood at all, due to years of abuse and neglect by people who didn’t deserve the title of “parents,” followed by several more years of being bounced around in foster care.” —AMY

“The only pictures I have of my daughter’s birth parents are ones that I found on Facebook and they are not something I’d want to display. We’ve asked for pictures, but they have chosen to not be in our daughter’s life. Maybe one day. I’m going to try to crop the ones I did find and put them in her album.” —TABATHA

“My kids were adopted from China. I don’t have birth family pictures, but have foster mom ones.” —MELISSA

“My son is still pre-adoptive. I don’t have family photos up yet because I’ve never been given any. When I receive some, I intend to put them up because we’re telling him that we’re adding to his family and not subtracting people. However, I won’t be displaying photos of the birth family members who abused him.” —BRADLEY

“We have none for either child. We do, however, have quite a few items from their birth countries on display.” —SUSAN

“If I had some, I would hang them. Our son’s family is now our family too. We do have a family orchard (instead of a tree) made from buttons hanging in our living room. His mother is at the center, and all the other family members also have their own tree in the orchard.” —ALEJANDRA