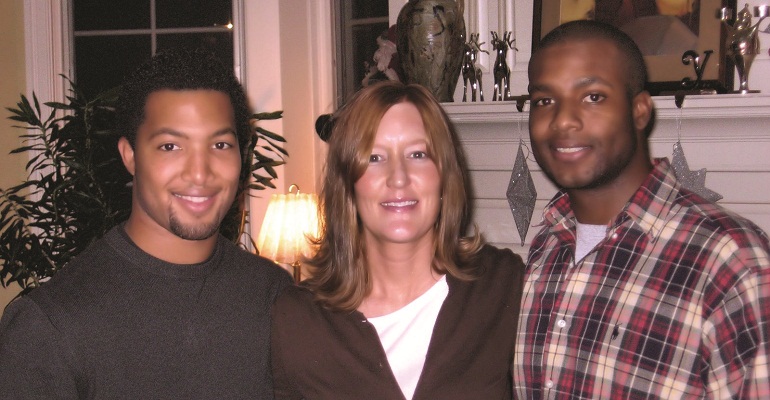 I met Mychael and Malcolm about a year after they entered the foster care system. I was fresh out of college and working for a program that targeted at-risk youth who were wards of the court. I spent hundreds of hours with them during the nine months that they were in the program, and our staff fondly referred to them as “Gretchan’s babies.” They were funny and amazing.

When the program ended, I continued to mentor them. Like all children in foster care, Mychael and Malcolm were always waiting for the next shoe to drop–and the shoe will drop. They planned ahead and worked to line up alternatives to their current placement. They asked everyone they knew if they could bunk on their couch once the inevitable occurred.

When Mychael and Malcolm solicited their spots on my couch, I was evasive. But the kids were persistent; they know what it takes to survive. After a while, I agreed.

And then I went a step further.

“Why don’t you become their parent?” my boss challenged.

“Are you crazy?” I replied. “I don’t want to even think about that.” Besides, what’s in it for me? I was 25, and had just begun a career. I’d purchased a home, and I was going to graduate school to prepare for my dream job. I was dating and hanging out with friends. The last thing I wanted to think about was adopting teenagers!

Although I didn’t want to think about it, I couldn’t stop thinking about it. Mychael had been separated from Malcolm and placed in a group home, where he would likely age out of foster care. What if I were 15 and had no one in the world to make me feel safe? I was 25, and I still couldn’t imagine facing the future without my mommy. I couldn’t be just another person in their lives who let them down. How would I feel if, 10 years later, they were in prison, homeless, or dead?

So I picked up the phone and made the call.

Ten years later, my phenomenal kids are completing their bachelor’s degrees. Mychael and Malcolm have plans for a bright future after college. They have a big family that loves them. They have girlfriends, friends, and normal, middle-class lives.

My first goal was to show them that hard work equals success. They had seen a lot of people work hard, and not achieve success, despite their effort. I needed Mychael and Malcolm to believe that they were worthy of opportunities. I put them into environments where they could only be successful. They played football and lacrosse in high school. Each had a part-time job, in addition to attending school. I was an active participant in their education, and spoke often to their teachers. My sons did everything they could to make up for lost time, even taking voluntary summer school classes, to catch up and make the grade.

The most important factor influencing the kids’ academic (and overall) success has been that it was expected of them. They had the potential and motivation; it just needed to be harvested.

Of course, the transition was a challenge. However, a little compassion goes a long way. The challenges that adopted children face aren’t so different from those experienced by biological children. Everyone needs to feel safe, loved, and accepted.

The kids are the glue that holds our family together. Before I became an adoptive parent, I looked at adoptive families and thought, “How does that work?” The answer: Like any other family! We play games, like Apples to Apples, Taboo, and Rock Band. We go to Purdue football games and spend every New Year’s Eve together. We work on projects and go on family adventures.

If you’re still wondering what was in it for me, the answer is simple: everything.